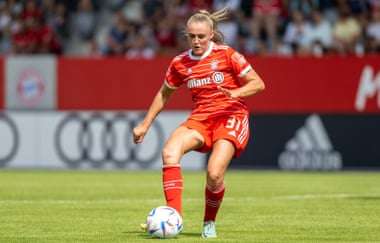 Rule number one of English football: when Leah Williamson tells you to do something, you do it. Particularly when she is screaming it at you over the din over 90,000 supporters at Wembley. “We want them to come to WSL games!” she yelled of the 17 million viewers watching the triumphant climax of the Euro 2022 final on the BBC.

Happily, the public have taken Williamson’s advice to heart. Something has changed here. On Friday night, Arsenal and Brighton kicked off the new Super League season with a sell-out at Meadow Park. Manchester City have already sold 20,000 tickets for their derby against Manchester United in December.

Aston Villa’s season ticket sales are up 108%. And although the death of the Queen scuppered last weekend’s big opening, the stage is now set for the latest chapter in one of British sport’s outstanding success stories: a game that over the decades has built itself up from enforced extinction to create something fresh, exciting and joyful.

Now for the delicate part. With the euphoria of Wembley now a cherished memory, the arm wrestle over its legacy has begun. Never have there been so many competing visions of what women’s football should look like in this country. Everyone agrees on the imperative to “grow the game”. But how that growth should be generated and who it should primarily benefit: these are questions that will be resolved in the coming months, questions that will define the soul of the sport.

Within hours of England’s win over Germany, the Chelsea manager Emma Hayes had used her column in the Telegraph to demand a radical rethink of English women’s football. Hayes called for the WSL to be run along similar lines to the Premier League, a breakaway body geared towards maximising the commercial potential of the top clubs, seeking “investment from corporations and partners and sponsors” that would create a “trickle-down” effect through the game. “I’ve always been an advocate of the women’s game becoming a business,” she would say later. “I think we’ve now entered that phase.”

Hayes is by no means alone in conceiving women’s football in terms of a lucrative start-up. “It’s a literal gold mine,” said Megan Rapinoe in a Guardian interview last month. The Denmark international Pernille Harder, meanwhile, has spoken in glowing terms of the spiralling transfer fees at the top end of the women’s game, saying: “I think it’s good for women’s football to get the money rolling. It shows that it keeps developing.” Naturally, there are multiple strands to this debate. Hayes’s job is to advocate for her club, currently striving to push the boundaries, to attract the world’s best players to London, to compete not just at domestic but European level. The departures of Keira Walsh to Barcelona and Georgia Stanway to Bayern Munich suggest that English clubs are still some way behind the cream of Europe in terms of prestige and pull.

But further down the pyramid, where salaries are barely liveable and training invariably has to fit around work, you hear a very different perspective on growth. “What is the purpose?” asks Maggie Murphy, CEO of Lewes FC. “Is it just entertainment, is it a business? Because if so, then at some point Lewes FC will fall off and die. If decisions are made that just require more and more money on unfeasibly short timelines, we won’t be able to keep up. So for us, it’s an existential question.” Lewes play in the second-tier Championship, one of the few teams at the elite end of the game not tied to a big men’s club. They are fan-owned, generate all their own revenue and are still the only club in the UK to split it equally between men’s and women’s sides. Attendances have quadrupled in three seasons. If you wanted to design and run a women’s football club from scratch, Lewes would be your starting point.

“We’re more than just football. We’re football, plus community, plus purpose,” says Murphy. “Often I’m jealous of other clubs’ funding, and then I meet some of the staff that work at those clubs, and they’re jealous of our environment, our town, our community. You can’t falsify that stuff.” Murphy sits on the board of the WSL and Championship, which means that the coming months bring some tough conversations. The Football Association runs the women’s game at all levels in England but is preparing to let go of the WSL competition it inaugurated in 2011. Advertisements will shortly go out for a new independent chief executive to run a standalone WSL and Championship.

The FA would retain a share for three years, but ultimately leave the future in the hands of the biggest women’s clubs, which to an increasing degree also happen to be the biggest men’s clubs.

Liverpool’s promotion means that the top nine clubs in last season’s Premier League are also represented in this season’s WSL. (Aston Villa, Everton and Reading are the others.) This is the crystallisation of a long-term trend: while the inaugural WSL seasons saw Bristol Academy, Doncaster Belles and Lincoln grace the top flight, over time the gravity of men’s football has imperiously asserted itself. Arsenal, Chelsea and Manchester City have occupied the top three places in every WSL season since 2015. Tottenham, Manchester United and West Ham have belatedly begun to invest. Newcastle, who have made women’s football a priority under their new ownership, will not stay in the fourth tier for long.

Lewes do not have a big benefactor, and have powered themselves into the second tier entirely through membership, sponsorship and matchday revenue. If women’s football ends up locked in a toxifying spiral of spending and profit, an arms race to the top, they will simply be unable to compete.

“One of the ironies is that the better women’s football gets, the more dependent it becomes on men’s football to finance that ambition,” says Murphy. “You can’t just assume that more money is a good thing. If it’s not paired with good governance and equal decision-making and diversity, then I’m not sure it necessarily is. If the assumption is that more money at any cost is good, we’ll start to see some dodgy investing that could tear at the fabric of the culture we’ve built.”

The woman with the unenviable job of finding a compromise between these competing visions is Baroness Campbell, the FA’s head of women’s football. “I’d love to give you a really simple answer, but there isn’t one,” she admits. “What we don’t want is the head leaving the body. What we’re selling to broadcasters and sponsors is a competitive league, not four or five teams. And therefore growing the whole thing is important. We’ve got to take everybody on this journey. I think we all understand that.”

There are radical solutions on the table. Equalising prize money in the FA Cup would have the potential to transform smaller clubs in the space of a single afternoon. A progressive redistribution of broadcast revenue – weighted towards clubs further down the pyramid – would be more transformative still. But as the Brighton director Michelle Walder admitted to SportsPro: “Nobody is necessarily going to want to fund their competitor who might get them relegated. So it’s a balance.”

These are questions that stray into the realm of the ideological. But then women’s football has always been an ideological thing: imagined from its very earliest days as an alternative culture, a struggle against traditional power, the simple idea that existence could be resistance. That ethos persists to this day. By and large women’s football is a diverse and safe space, its people approachable and relatable, the product largely uncontaminated by tribalism and abuse, crypto scams and super-agents.

In fairness, retaining the unique culture of women’s football is a priority that almost everyone agrees on. More importantly, the top players – virtually all of whom emerged from obscurity through an underfunded system – are united on the importance of furnishing the whole pathway. Arsenal’s defender Lotte Wubben-Moy was behind the open letter from the Lionesses to Liz Truss, demanding greater investment in school sport. “They’re very grounded and very authentic,” says Campbell. “They’re proud to put on that England shirt, they’re proud to put on their club shirt. But they want to keep the thing whole.”

Which is why the next eight months of conflict, conversation and consensus are so critical. The Lionesses have shown what is possible when you invest in the top end of the women’s game. Meanwhile the WSL’s big three are streaking off into the distance. Growing the game in a way that gives everyone else a chance: this is the battle ahead. And never has there been a more apposite moment to disprove rule number two of English football: eventually, money finds a way through.