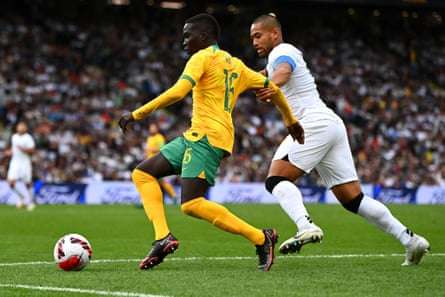 Garang Kuol is officially off to Newcastle United. Having rode a wave of momentum from A-League youth football to the biggest league in the world in less than a year, the world is at the feet of Australian football’s next big thing. Now, with an entire nation watching on, he stares down the barrel of taking daunting, and treacherous steps into the unknown.

Just a week on from becoming the youngest player to debut for Australia since 17-year-old Harry Kewell, Kuol was formally unveiled as the latest member of the Toon on Thursday after flying to the UK following the Socceroos’ 2-0 win in Auckland to seal the deal.

Signing a contract that, according to reports, will make the 18-year-old one of Australia’s highest-paid footballers, the attacker will complete his move to the English Premier League when the transfer window opens in January. Having moved to sign him to a two-year deal in June, Central Coast are expected to receive a transfer fee of close to half a million dollars for the talented youngster, as well as the promise of lucrative sell-on fees.

“It’s unreal,” Kuol said in a statement. “As a young boy in Australia, the Premier League is the main thing that everyone watches, but nobody actually thinks they’ll reach those heights. To be one of those people, to be in the position I am, it’s amazing.

“Now that I’ve signed for Newcastle, I want to train hard, play hard, hopefully go to the World Cup and come back here.”

The announcement caps off a whirlwind six-month rise for Kuol, during which he has progressed from a fringe youth prospect at the Mariners seeking to follow in the footsteps of his older brother Alou, to the darling of the A-Leagues and a potential Socceroos World Cup bolter. To date, he had four goals and an assist in seven appearances off the bench. He has not started a single game of senior professional football.

Even taking into account the limited sample size, Kuol represents one of the most exciting and naturally talented prospects produced by Australian football in years. Playing with a sense of freedomhe also has an innate sense of timing and positioning not often seen emerging from the country’s developmental framework. At 17, he was among the A-League Men’s leaders in dribbles and entrances into the opposition penalty area when adjusted for his limited minutes.

In short, he makes stuff happen, a quality which will have him in the frame for Graham Arnold’s Qatar 2022 squad – should he be given and the opportunity to shine in the opening six weeks of the domestic season.

Nonetheless, the hype train may need some tempering. Australian football is littered with cautionary tales that, for a variety of reasons, were never able to deliver on the fanfare. In Newcastle, he is not the golden child or the next big thing, rather just one of numerous young and talented prospects from all over the world pushing for a chance which might never come. Fortunately, he at least appears to have avoided being christened with the cursed title of ‘the next Mark Viduka’.

Kuol will not qualify for a work permit when he arrives in England and will thus need to be immediately loaned to a club on the continent, with Portugal mooted as the most likely landing spot.

At some point, he will need a first start at senior level and work to develop both his game and fitness to the point where his devastating skill set will continue to impact defenders for the full 90 minutes.

This development will likely take place under the stewardship of a club which stands to gain very little beyond the short-term on-field contributions he can make during his time on loan, giving them little incentive to prioritise his development over other young players under contract. This makes his landing spot key: regular football and an environment in which both his strengths and weaknesses are addressed, and a patience which will be critical to his progression.

Many of the calls for caution have been framed around Daniel Arzani, who returned to the A-Leagues this season after four ill-fated years abroad. At a base level, comparing the two as players is not altogether helpful, given their vastly different roles before their departure. But Arzani’s experience can speak to the role that fortune can also play in all this. The then-19-year-old tore his ACL barely 20 minutes into his first senior appearance while on loan at Celtic, derailing his progression. Subsequent loan moves into unhappy environments did not help.

Of course, the harder one works the luckier one tends to get, and Kuol has the innate tools of a star. Australian football will watch him every step of the way.