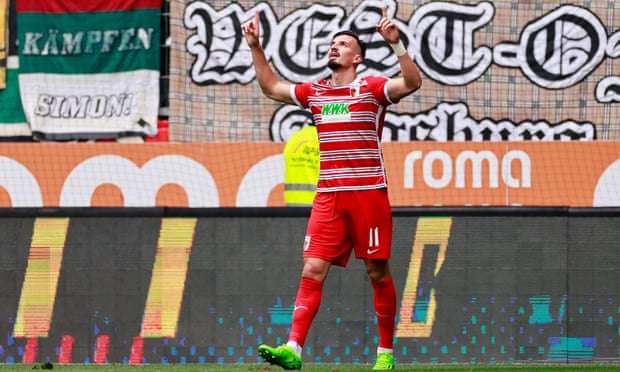 Manuel Neuer has been the hero on so many occasions but here, he very nearly found a new way to be so. His 95th minute header from Joshua Kimmich arrowed towards the corner but his opposite number, the outstanding Rafał Gikiewicz, twisted on his line and dived to push it away with his left hand. Seconds later, Neuer lurched at the ball after Alphonso Davies lifted it back in, and Gikiewicz palmed away again, to the fevered acclaim of his teammates. The plaudits belonged to the Polish goalkeeper, rather than the German one, this time.

But since when were Bayern reduced to this? Neuer’s very presence in the Augsburg penalty area, as Bayern Munich sought desperately to slip out of a first defeat of the Bundesliga season, was an admission of desperation. They were not able to but that their highly decorated last line of defence was almost able to make the difference at the other end was jarring. One of the headlines in Bild on Sunday did not miss the opportunity to highlight that Neuer had more efforts on target than Sadio Mané in a deflating loss to local near-neighbours, an hour to the north-west of Munich, who may have established themselves in the top flight but do not have the stature to be described even notionally as rivals.

The second half of Tuesday’s Champions League victory over Barcelona had soothed simmering disquiet around Bayern after three straight Bundesliga draws. This extension of the domestic winless run to four turned the volume of those dissenting voices all the way up to 11, louder than ever. Robert Lewandowski’s spurning of a series of chances in the first half of his first return to Allianz Arena had done Julian Nagelsmann – with whom he didn’t always see eye-to-eye – a favour, allowing the coach parity in which to tighten up at half-time, to rearrange and to go on and win the game. That Lewandowski had recovered from his midweek frustrations to bag another couple of La Liga goals in a stroll of a Barcelona win over Elche did not escape Bavarian gazes.

After such a result, the hole left by Lewandowski’s departure, real or perceived, yawns larger than life, fuelling yearning to a simpler time when everything was clearer. Lewandowski plays, Lewandowski scores. Mergim Berisha’s smart finish for Augsburg’s winner at the other end just before the hour, giving Enrico Maaßen’s men a not undeserved win, was only one of a series of pointers towards the view that Big Number Nines Rule OK.

This, paired with the drama of Bayern looking human, all glosses over some actual facts; that Oliver Kahn and Hasan Salihamidzic, who both made clear their displeasure with the performance and result after the game, are happy with the composition of the squad, that Nagelsmann’s football is more set to flourish without a more traditional number nine, and that Bayern had 19 shots on goal without making them count, just as Borussia Mönchengladbach’s Yann Sommer had made a Bundesliga-record 19 saves against Bayern at the start of this frustrating winless run.

Yet just as Nagelsmann retains the confidence of the club – and they really need this to work having spent a world record €25m to break him out of his RB Leipzig deal last year – he is smart enough to know that all the good process in the world means little if the results won’t fall. It’s not bad enough yet for Thomas Tuchel to really loom in the background, but having a recent German Champions League winner in the background is not ideal for Nagelsmann. “It doesn’t really matter what I answer now,” he said in response to the question of if his team still needed Lewandowski. “If I say no, then it says he doesn’t see the problem. If I say yes, then everyone’s going to write he misses Lewandowski.”

Statistically, you can see the point of the naysayers. Augsburg, who have been an occasional fly in the Bayern ointment in the last decade – just ask Pep Guardiola – brought an end to Bayern’s Bundesliga record run of consecutive scoring games (86), and if it isn’t yet panic stations, there is reason to reflect over the international break.

The coach retains the confidence of his superiors. Salihamidzic insisted Nagelsmann’s future was “not a topic” while Kahn defended the club’s recruitment. “We have everything we need,” he said, and enthused about “our attacking players with enormous speed”.

Finding clarity and reason while Bayern are on this run, though, is not easy. The atmosphere around Sunday’s traditional visit to Oktoberfest was strained, and it will take weeks of convincing performances to blow that feeling away. “I’m thinking about everything,” said Nagelsmann. “About the situation. About me. About everything.”

All well and good, but nuance will always be lost when Bayern fall short of their impeccable standards. And he knows it.

Another big name currently in a hole of their own chance-frittering making are Bayer Leverkusen, held to a 1-1 draw by (still unbeaten away) Werder Bremen thanks to Milos Veljkovic’s equaliser in the game’s final 10 minutes, which followed a bad error by Lukas Hradecky, who failed to clear Niclas Füllkrug’s header. With just one win from seven games so far, Gerardo Seoane is under pressure despite the impressive midweek win over Atlético Madrid in the Champions League.

Union Berlin are in the opposite situation; they recovered from a second straight Europa League defeat by beating struggling Wolfsburg 2-0 – the inevitable Jordan Siebatcheu and Sheraldo Becker getting on the mark – and retaining the Bundesliga leadership. Urs Fischer’s side also rejoiced in the return of Timo Baumgartl after recovering from testicular cancer. “I imagined this during chemotherapy,” he said, “the hardest moments of my life, coming back for this moment.”

There was more history for Youssoufa Moukoko, who is now the youngest Revierderby scorer after coming on as substitute for Borussia Dortmund to head the winner against Schalke. His performance, full of urgency, came from “an anger in my stomach, as I wanted to start,” the 17-year-old admitted after the game. There is a growing belief that he should be starting instead of Anthony Modeste after another pedestrian display.

The win had been soured by the sorry sight of skipper Marco Reus being stretchered off in the first half with a serious looking ankle injury, with immediate concerns over his availability for the World Cup (and poor Reus has been here before). The initial prognosis on Sunday morning was more promising, with sporting director Sebastian Kehl suggesting he will miss “three weeks” rather than months.

It’s been a tough first week in charge of Leipzig for Marco Rose – after meeting one former club in Dortmund and then travelling to Real Madrid in midweek, he took his team to another former club in Mönchengladbach, where he (and ex-Gladbach, future Leipzig sporting director Max Eberl) were met with chants and banners of such hostility that referee Patrick Ittrich had the latter removed, to some consternation, before allowing the match to proceed. This partially overshadowed a second heavy away defeat in four days, with Jonas Hofmann’s two goals for the hosts making it a miserable day all round for Rose.