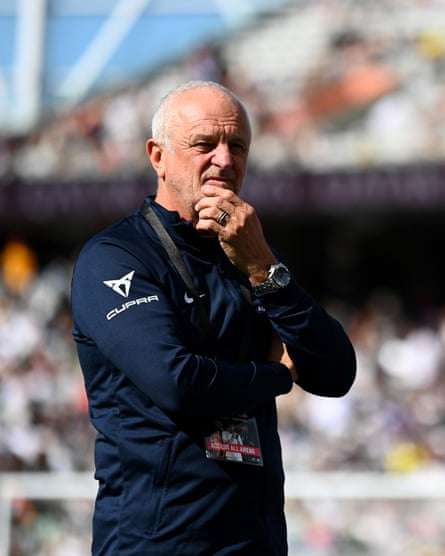 “I’m going to reach out to Panadol as my new sponsor because I’m going to have quite a number of headaches to fit into a 26-man squad,” Socceroos coach Graham Arnold said in the aftermath of his side’s 2-0 win over New Zealand on Sunday afternoon. Delivered with a wry smile, it was a rehearsed gag that spoke to one of the biggest challenges the 58-year-old – and every other coach heading to Qatar 2022 – will face in the coming months.

Between now and 14 November, Arnold faces the mammoth task of weighing up a complex set of factors including, but not limited to, form, fitness, team chemistry, complementary skill sets and adaptability, to determine which players will realise the ultimate honour of representing their nation at a World Cup – and which will have their dreams dashed.

And inevitably, even with squads extended to 26, instead of the normal 23, there’s going to be more of the latter than the former. Forty-eight players were called up during the Socceroos’ campaign to qualify for a fifth straight finals, without considering Sundays debutants Harrison Delbridge, Ryan Strain, Cameron Devlin, Keanu Baccus, Jason Cummings and Garang Kuol.

With his assistant René Meulensteen based in Europe, Arnold’s next step will be to return to Australia for the start of the A-League Men season on 7 October, with domestically based players – behind the eight ball compared to their compatriots whose European leagues are already under way – to get six games to prove their worth before the squad is named.

It is in these fixtures that the two players with seemingly the most fan sentiment, Cummings and Kuol, will need to shine. The duo were unlikely to have secured a ticket to Qatar based on the New Zealand series alone, but they certainly could have ruled themselves out had they not put in head-turning cameos in the second half of Sunday’s win.

With Adam Taggart, Mitch Duke, and Jamie Maclaren seemingly entrenched, Cummings must excel in what appear a very manageable six games for the Central Coast Mariners to convince Arnold he needs four centre-forwards in Qatar. Kuol, meanwhile, may find himself up against Maclaren’s Melbourne City teammate Marco Tilio for a place on the plane. Tilio, for his part, will need to fight for opportunities to impress as part of a crowded City attack in which he played only 53.6% of available match minutes last season. Daniel Arzani has endured a horror stretch since becoming 2018’s bolter de jour, but his skill set means the now-Macarthur winger retains the tools to make a late run.

In Japan, Thomas Deng, after arguably being the Socceroos’ best on Sunday, will return to promotion-bound J2 League side Albirex Niigata with four games to impress. Able to play right- and centre-back, the 25-year-old’s versatility will not only boost his late push even in the event Harry Souttar and Kye Rowles, ostensibly locks for selection if fit, return from injury, but will also add a wrinkle in the battle between Strain, Fran Karacic, and Nathaniel Atkinson on the flank.

In Europe, a logjam of players shaping as the squad’s future core will fight for a chance to provide depth to the already-crowded midfield of the present. Denis Genreau, Riley McGree, Connor Metcalfe, Cameron Devlin, and Baccus all need to seize their chance to go from Olympians to World Cup seniors under Arnold.

Of course, for all this excitement and speculation, that is not to say some players are not – barring injury – all but formally locked in.

Arnold, speaking to AAP ahead of Sunday, said “15 or 16 players” had already cemented themselves in his plans and it is not too difficult to guess who some of these individuals are; mainstays Aziz Behich, Ajdin Hrustic, Jackson Irvine, Karacic, Awer Mabil, Maclaren, Aaron Mooy, Mat Ryan, Trent Sainsbury and Taggart were all given leave to depart camp after Thursday’s game in Brisbane and return to their clubs.

But then there’s another mainstay. Or, at least, a player who would normally be considered a mainstay: Tom Rogic.

After seemingly falling off the face of the earth after withdrawing from the Socceroos squad ahead of their June play-offs, the mercurial attacker earlier this month resurfaced at West Bromwich Albion, signing at the Hawthorns until the end of the season.

When fit, Rogic – alongside Hrustic – is arguably Australia’s most important reference point in possession, and Arnold has signalled he’s ready to welcome him back into the fold, should he find form and fitness. If he can, Arnold’s local pharmacy might need to stock up.