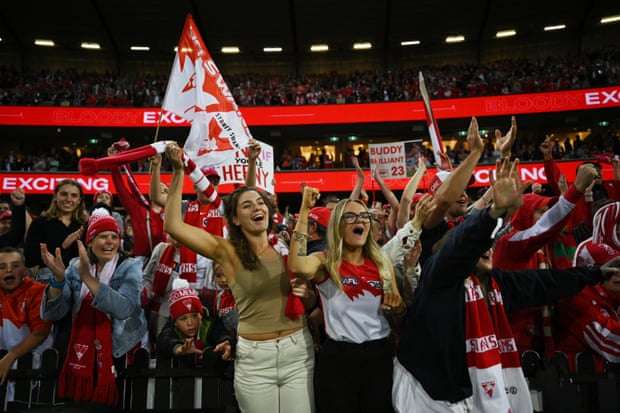 Before we get to Saturday’s preliminary final, forgive me as I shake my fist at a cloud. For reasons no-one can explain, or take responsibility for, they now blare music after every goal at the MCG. The stadium was one of the last to succumb to this execrable trend. But in a finals series where more than quarter of a million people have turned up to three MCG games, apparently the atmosphere needs to be augmented with lashings of Kool and the Gang, Kenny Loggins and Chad Kroeger.

They play music at the SCG too. But it works there. It suits the market. It suits the ground. Going to the football at the SCG is more of an event than a ritual. When the Swans are winning and the house is full, the SCG has a feel unlike any other stadium. Not that Saturday’s game needed musical accompaniment. The crowd was febrile. Tickets had sold out in 20 minutes. Thousands of Collingwood diehards had been bused in. It was the third biggest ever crowd at the ground.

As the sun was going down, they were witnessing a rout. Lance Franklin was in one of his moods. The Collingwood back six were in disarray. The clamps were on Jordan De Goey and the Daicos brothers, Josh and Nick. Every ounce of luck seemed to have deserted Collingwood. Every weak link was being exposed. The Pies wanted a hypersonic game. Sydney wanted a knife fight, and they had one. There would surely be no miracles this week.

Most other sides would have waved the white flag, just as Brisbane had the previous night. But this team simply doesn’t stop. They kept attacking. They kicked to spots few would have dared. They kept the ball alive at all costs. The Swans have excelled in final quarters this year, but they were dead on their feet. In the dying minutes, you couldn’t even hear the rock music. It was, as Martin Amis once wrote of a Manchester United crowd, “a wraparound millipede of rage and yearning… like a billion babies joined in one desperate scream”.

On the field, it was a marvellous mess of bobbling balls, flailing bodies, pile-ons, pack marks, spoils and smothers, and the Pies came up agonisingly short. They lost despite the efforts of Jack Crisp, who had 20 contested possessions, at least half a dozen of which seemed to come in the last 90 seconds. “Winners don’t think ‘what if’ and ‘if only’,” Craig McRae said afterwards. But the rest of us can. Why was the backline – so daring and so watertight all year – so jittery in the first term? Why was Brayden Maynard matched up on Franklin? What, exactly, was the 50-metre penalty against Jack Ginnivan for? And will the AFL, as is their way, ‘tick off’ on the Tom Papley decision in the final term?

Papley has one of those mugs that will be tattooed in Collingwood supporters’ brains for decades to come. He joins a long list of footballers – from Barry Breen to Ted Hopkins; from Wayne Harmes to Dom Sheed – who have broken Collingwood hearts in big games. He is straight from central casting – a snarling, sniping, strutting, very effective footballer who straddles the line of civility. Yes, we can question whether his hands were in Darcy Moore’s back, or whether he held onto the mark. Yes, we can ponder why, in a sport that is umpired to within an inch of its life, a sport where they’ll penalise you for looking at an umpire the wrong way, you can shove two hands in an opponent’s back with impunity. But ultimately, one of the smallest players on the field out-manoeuvred one of the best intercept defenders in Australia, and helped send his team into a grand final.

The Swans were worthy winners on Saturday. For all their thousand-goal superstars, professional irritants and boy band looks, they play blue-collar football. Even when the Pies were rattling home, Sydney did the little things well – a block here, a tackle there, a smother, a shepherd. Football is about playing your role, but Callum Mills performs about a dozen of them – tagger, blunter, two-way runner, switch man, fixit man, connector, organiser, last-grasp lunger. He played a mighty game.

It was a long drive back down the Hume Highway for Collingwood fans. But they should be proud of their team. They’ve been a joy to watch this year. They’ve won in ways we’ve never seen. They refused to be bowed. They lost one of the great preliminary finals – a game that stacks up alongside the classics of the past. It had generational talents. It had utter devastation. It had heroes and pantomime villains. It needed about five re-watches to make sense of it. It didn’t need rock music, fun facilitators or all the modern-day saturnalia. The game spoke for itself on Saturday. It has all year.