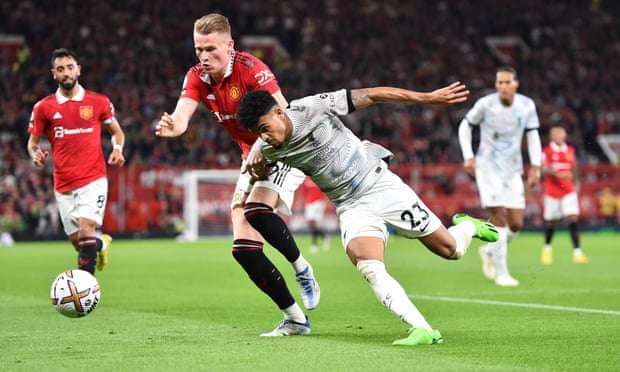 That’s the case even if they end up at Manchester United, whose standing in the game since the second world war is down to the achievements of just two men: Matt Busby and Alex Ferguson. And what defines them, along with all the others who’ve enjoyed even moderate success in the role – Tommy Docherty, Ron Atkinson, Louis van Gaal and José Mourinho, as opposed to Frank O’Farrell, Dave Sexton, David Moyes and Ole Gunnar Solskjær – is charisma.

It’s not hard to fathom why. In his early days at Old Trafford, even Ferguson could be heard muttering “Big club, this”, and its exponential growth since then means that, almost a decade into the post-Ferguson years, charisma seems an essential quality for anyone hoping to prosper.

If Erik ten Hag has any, it is not immediately obvious. But as the saying goes: “One man’s charisma is another man’s absolutely intolerable nausea,” the quality often confused with loud, aggressive self-aggrandisement and exemplifying the toxic masculinity that has the made the world such an unedifying place.

True charisma is different, reliant neither on arrogance nor loquaciousness. Busby spoke only when necessary, while Ferguson – though he did inspire fealty with oratory – was similar, his influence underpinned by the sensitivity of his pastoral care.

Ten Hag understands this too, recently explaining that Marcus Rashford’s improvement comes thanks to a happy working environment. But close relationships aren’t built overnight, so in the meantime he will need his football to supply his charisma for him.

This sounds reasonable. Which of us hasn’t used our obsession with the game as a personality proxy; found elemental truth in our club’s identity, then ascribed it to ourselves? Except Ten Hag still has a problem because, though his Ajax sides played with bravery and flair, translating that to “this league” is difficult.

Luckily, he either possesses, or is successfully affecting, implacable self-confidence. Not only does the 52-year-old wear pumps and no socks with his too-short suit trousers, but he has told friends that, if allowed the first two years, he will get United sorted. The Dutchman believes in his system so fervently he has been preferring Scott McTominay to Casemiro because the latter, having missed pre-season, needs time to grasp his role in it.

Instilling similar spirit in his players, though, is no easy task, for his is a squad expert in the deployment of collective cowardice to have managers fired. For a while now, United have been good enough to beat the best and they have also gone on long unbeaten runs. Their most glaring inadequacies are not technical but mental: a lack of precision, a lack of focus and a bottom level lower than the Dead Sea. They are weak.

Ten Hag deduced this almost immediately. “It was a good start,” he said after United lost to Brighton in their season opener. “Then after we dropped down a level, dropped down in belief … it’s not necessary. They are good players, self-belief is from yourself.”

An even worse performance followed at Brentford, who won 4-0, but things have improved significantly, and after a surprise win over Liverpool in United’s next game, a fired-up Ten Hag explained the difference in characteristic style: without rhetorical flourishes but with honesty, lucidity and passion. “We can talk about tactical but it’s all about attitude,” he said. “Now you see we bring attitude on the pitch and there was communication, there was a fighting spirit and there was a team, and you can see what they can achieve because they can fucking play good football.”

This summer was always going to be a pivotal one for United. The Glazer family have now owned the club – bought without a penny of their own money and with the debt incurred loaded on to its books – for 17 years, pillaging it of roughly £1.6bn to pay their interest and themselves dividends – around £23m in the past 12 months alone.

Initially – and though this stopped United winning even more than they did – Ferguson’s genius kept the titles coming. But since his retirement a succession of managerial appointments have failed, each undermined by the owners’ multi-dimensional avarice. And even if Moyes and Solskjær weren’t up to the job and Van Gaal and Mourinho were past their best, Ten Hag is on the upswing and at the cutting edge. Consequently, should they let him down too, the club becomes a pariah to any manager with options.

As such, the arrival of only three new players before the season started was deeply problematic, and even after the Brentford humiliation United were chasing Adrien Rabiot and Marko Arnautovic – cheap compromises way below the required standard. So their replacement with Casemiro and Antony gave the squad a fillip when it needed one most – though the haphazard manner of things illustrates the grave incompetence for which United are now famed.

What prompted the change of plan is unclear. Perhaps it was the poor start and the Glazers’ fear of reduced dividends. Or perhaps Ten Hag advised them that were he to resign citing their desire for a trust fund rather than a football club, that trust fund immediately becomes less generous. But either way – and though Ten Hag now has a question to answer about Arnautovic’s past, to go alongside the one about his support for Marc Overmars – the sheer overwhelming awfulness of the Brentford display was a blessing. No longer needing to earn the political capital to make major changes, he could simply make major changes, dropping Harry Maguire, Luke Shaw and Cristiano Ronaldo to pick a team in something approximating to his image.

On which point, it is instructive to consider the players recruited. Ordinarily, a manager infatuated with those he already knows looks like Harry Redknapp signing Niko Kranjcar for the 67th time, but the circumstances here are more forgiving. At Ajax it was not incumbent upon Ten Hag to scout talent, so it makes sense that those for whom he will vouch are those he knows and, given United’s embarrassing state relative to Ajax’s healthy one, those players may well be the best available to him. Like all potential signings, they don’t know if they can trust the club, but unlike other potential signings, they do know they can trust him.

Or, in other words, Ten Hag’s skills as a coach and as a man – what we might call his charisma – have attracted players who might otherwise have been out of reach. No doubt the unique charisma of the late Queen’s printed face also helped, but Christian Eriksen had options, Tyrell Malacia was about to join Lyon, Lisandro Martínez refused to countenance Arsenal despite the London factor, and Antony – at whom, it is understood, United had a free run because he can be difficult – knows Ten Hag “is perfect” for him, so went on strike to force his move.

Given those players owe Ten Hag, either for making them better, securing their financial future, or both, the least he can expect is their unswerving commitment – but there is more to it than that. Casemiro’s CV alone evidences force of personality, and when he left Real Madrid, Luka Modric called him a “true leader” and “the best bodyguard in the world”, while Toni Kroos wrote: “With you even the Turkish bath was a gym … and you only allow people to lie down when it’s time to do sit-ups.”

Similarly, the uplifting devotion with which Eriksen fought back from his near-death experience, along with his Mensa-level footballing IQ, accords him a status able to lift those around him, while the confidence, aggression and enthusiasm of Malacia and Martínez have already made a huge difference. And because Ten Hag has picked strong, bright characters, he now has strong, bright dressing-room voices to echo his messages and affirm his methods, mitigating any lack of personal magnetism with players whose competitive charisma supplies it for him.

Which is to say that the best kind of charisma is charisma that inspires others to find theirs, and in that aspect, Ten Hag is set. But as Atkinson, Van Gaal and Mourinho can confirm, ultimately, only one kind of charisma counts: the unrivalled charisma of sustained success.