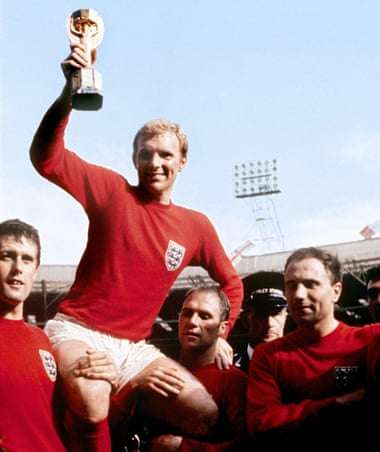 Welcome to the reckoning up. Global sport has spent much of the last two years in a state of jet lag, frazzled by bubbles and firebreaks, by dates that aren’t really dates, events that seem to be taking place in the wrong timeline. Well, here comes the centrepiece: Qatar 2022, the one non-negotiable, the fixed point around which this state of flux has revolved.

Check the watch in your pocket, still set to Standard Tournament Time, and it’s actually April right now. The World Cup is – cabin crew, seats for landing – less than two months away. And the lead-in kicks off this week with a round of Nations League fixtures, first steps towards a final in Doha on 18 December. At the end of which, red-eyed and jittery, the season is free to stumble back through arrivals and straight into the Christmas fixture list.

For England that run kicks off on Friday night against Italy in Milan, followed by the visit of Germany to Wembley three days later. It is a delicious-looking double header, and an unusually urgent prospect on two fronts. First, as the last chance to settle questions of personnel and tactics before a World Cup that many people, or at least many English people, seem to think Gareth Southgate’s team should be among the favourites to win.

And second this is the start of a wider reckoning-up for the age of Gareth. It has been six years now, stretched out around only two actual tournaments, one of those a plastic, plague-ridden thing that began with a fudge and ended in a toxic hangover.

In that time the England team has been reimagined, over-lionised and elevated to unprecedented peaks of (non-trophy) achievement; but also dogged by a strange sense of rage and dissatisfaction. The next 12 weeks may just decide which way this thing is going to go. Southgate has said he will not outstay his welcome. And it is always just a little later than you think.

At which point, it is time to dust down some reassuringly familiar questions. Mainly, are England actually any good? What should we reasonably – that word is key – expect of this team? And just how distracting is the noise (because there is always noise) around it? As ever the answers are related. On Tuesday morning one national radio station was already asking whether anything short of winning the World Cup should be considered a failure for England, who have won one tournament in 72 years of trying. Hmm. Good question. Let’s break that one down, shall we.

In reality England are capable of reaching a quarter-final, with anything more than that a bonus. But two things will need to happen to make this work. First, they need to kill the ambient noise. And this is at least familiar territory. In many ways Southgate’s time has been defined by the unceasing battle with English delusion, English exceptionalism, the self-sabotage of unrealistic English expectation.

He has already won this battle once using his neatest trick, the ability to turn weaknesses into strengths. This is true on a tactical level. The England he inherited couldn’t keep the ball and were weak in central defence. Solution: play seven defensive players, keep the ball deep in that rump, become impenetrable.

The same thing has been achieved, more significantly, in the realm of feelings, vibes, energy. The England Southgate inherited were also arrogant and brittle. By the time Russia 2018 came around he had a team defined by its galvanising, performative humility. We are the humblest. Gaze upon our humility and tremble, for we are England, truly exceptional in our lack of exceptionalism. It worked too. The players felt no pressure. The nation triumphantly embraced its lack of triumphalism.

Of course, English delusion caught up with this too. The thinking seems to be: because we are now quite good we must as a matter of course be the best. The success of others is basically an aberration, a departure from some Arthurian state of grace. So the fact England have good players has been translated into “an unstoppable hand of golden talent”. The rare success of reaching the Euro 2020 final has become the inexcusable failure of failing to win the final of Euro 2020.

As ever this comes back to questions of scale. England are capable of beating Italy and Germany this week. But they are also bottom of their Nations League Group without a goal from open play. At the same time the idea of a crop of generational talent, the envy of all Europe, just doesn’t stand up. Harry Kane is England’s best player, top five in the world in his position, but with a gap to the Mbappé-Lewandowski elite. Raheem Sterling, Southgate’s second most effective attacking weapon, left Manchester City to get more starts.

None of England’s goalkeepers play in the Champions League. Phil Foden and Bukayo Saka are really good young players, but unlikely to inspire feelings of outright terror in countries who have their own broad hand of talented attackers. Which other elite international teams would be considering Harry Maguire and Luke Shaw for a starting place?

Plus of course, in a stunning blow to the national psyche, other nations do exist. The struggle to process this fact is in many ways the defining battleground of English football, and indeed of English culture generally. And there are teams out there that just look a level above. Brazil have lost once since the start of 2020. France and Germany are strong. Would England expect, as of right, to beat Belgium, or Portugal, or Spain, or Argentina?

There is of course an ad hominem element to this loss of scale, a personal animus behind the urge to talk down Southgate’s solid achievements as England manager. Many simply don’t like his politics, his manner, his tactical caution. But Southgate has his flaws too. There has been a lack of development, a sense other teams have learned how to combat England’s simple gameplan.

Each key defeat in his six years – Croatia, the Netherlands, Italy (on penalties) – has come as a result of being outmanoeuvred and outpassed late on in tight knockout games, where as rule the best midfield wins. The one real point of evolution here has been the willingness to start the more progressive Jude Bellingham. But Bellingham is also 19 years old. And a progressive whizzy 4-3-3 lost 4-0 to Hungary last time out.

It seems almost certain Southgate will retreat into his comfort zone now, into the football of control and fine details. England need to win this week, or at least avoid defeat, because winning has been hard. Mainly they need to create energy, to feel good, to find that pitch of missionary zeal.

Trust the process. At this distance, it’s the only one we’re going to get. And it is worth saying again. England have reached five semi-finals in 72 years, two of those (two out of two) under Southgate. However the current jet-lagged journey ends, those achievements will stand.