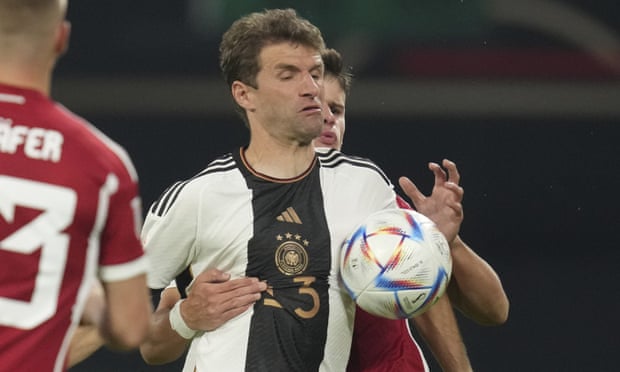 A proud footballing nation on a lean run of just one win in six games. A humiliating defeat at home against Hungary. And above all a sense of stasis and frustration, a lack of creativity, the suspicion that for all the talent and trophies in this team, it remains considerably less than the sum of its parts.

Germany and England may share a common predicament, but as they prepare to meet on Monday night only one of these nations is currently wracked by existential crisis. And curiously, it’s not the one that has bombed out of its last two international tournaments.

As Germany slipped to defeat in Leipzig on Friday night, the mood was defined more by indifference than insurrection. The few pockets of boos were drowned out by the sizeable Hungarian contingent, celebrating their first competitive win over Germany since 1985. Nobody was calling for Hansi Flick’s head on a platter. Nobody was writing off the World Cup. Instead, an implacable calm reigned, a sense that whatever their travails, this team will inevitably come good when it matters. “The coach has it under control,” Joshua Kimmich insisted.

Not that there wasn’t a certain disgruntlement at the defeat, Germany’s first under Flick. It took 37 minutes to register a shot on target, and even if they improved later on, chances remained cherishably rare. “The first half was just shit,” admitted Jonas Hofmann with impressive bluntness. Flick, for his part, was prepared to take his share of the blame for a bold tactical experiment in which Hoffman – normally an attacking midfielder – played at right-back. “It didn’t work that well,” Flick conceded.

But the most telling comment of all came from the stand-in captain Thomas Müller. “You notice that many of us are not going through the easiest phase at our club,” the veteran forward said. “We did not bring our power on to the pitch.” All of which essentially confirmed what many outside the camp have long suspected: that when Bayern Munich sneezes, Germany gets a cold.

Were he minded to do so, Flick could draw his entire front six from the current champions: Müller, Serge Gnabry, Leroy Sané and Jamal Musiala in the forward positions, Kimmich and Leon Goretzka behind them, with Manuel Neuer in goal. In practice Musiala is more likely to be an impact substitute. Neuer and Goretzka were absent on Friday with Covid issues. But the Bayern influence is indelible, not least in the form of Flick himself, who coached the club to their most recent Champions League in 2020.

Müller’s words were the first real admission of what many outside the camp have long suspected: that the problems at Bayern under Julian Nagelsmann, where the champions have gone four games without a win, are beginning to bleed into the national team. The lack of a focal point up front. The inability of wingers Sané and Gnabry to hit a consistent run of form. A certain slowness in the build-up. An imbalance between defence and attack, with Kimmich often the man caught out.

And with just two months until Germany begin their World Cup campaign against Japan, perhaps the most pressing question remains unanswered: who starts up front? Timo Werner? Kai Havertz? Nobody? Werner is currently the man in possession – Flick is a fan of his speed, his work-rate and aggression off the ball – but has scored in just one of his last six games. Lukas Nmecha of Wolfsburg is highly rated but not (yet) a consistent scoring threat. Which is why there is increasing speculation that there may still be time for a late bolter such as Niclas Füllkrug of Werder Bremen or Nils Petersen at Freiburg to make the plane.

None of which, curiously enough, seems to have made the slightest dent in Germany’s confidence. There appears to be a broad assumption that once the minor issues have been tweaked and the tournament mentality kicks in, Germany will be fine. “They are all competitive players, all winners,” trilled Oliver Bierhoff, now the team director at the German FA. Flick was of a similar mind: “Maybe the defeat came at the right time, rather than at the World Cup,” he observed.

There is a stark contrast here to England’s wall of wailing, and perhaps it is one that speaks to the respective footballing maturity of these two nations. In England we remain essentially incapable of analysing the national team without resorting to the register of crisis, hyperbole and ultimacy: he’s done, she’s finished, they’ll never win a thing, it’s coming home.

Imagine if it were Southgate who had failed to reach the quarter-finals in 2018 and 2021, who had been drawn in a group with Spain, who still didn’t have a recognised striker, who was dangerously beholden to a single struggling club. By contrast, you sense Germany are perfectly happy to leave the worrying to others.