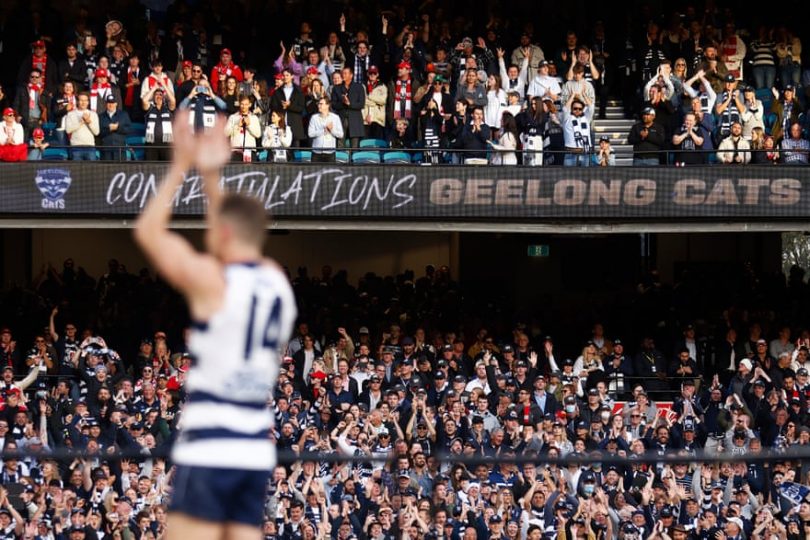 The team Joel Selwood led out on Saturday was the oldest to ever take the field in a VFL/AFL game. It was his 40th final. At the top of the race, Gary Ablett Jnr nodded to his former captain and handed over his son, Levi, who has a rare degenerative disease. Selwood, one of the most booed footballers in the history of the game, could have been elected, unopposed, the first Australian president at that exact moment.

Thirty years ago, almost to the day, young Levi’s grandfather ran onto the MCG with murder in his eyes. He spent the first half trying to kill any West Coast Eagle in his path. He spent the second with that blank, detached look he’d get when things weren’t going his way. West Coast coach Mick Malthouse later said he knew, watching the Cats in the warm-up, that they were too wound up, that they wanted it too much, and that they’d be ripe for the picking in the second half.

There was no danger of that on Saturday. As is the way of the modern footballer, they ran out whooping and gamboling about. But then Selwood gathered them in a circle. For all his outstanding work off the field, there’s nothing charitable about how he plays. “Let’s beat the fucking shit out of them,” he said. By quarter-time, he’d had a dozen touches and a hand in three goals. The grand final was as good as won, and Selwood’s legacy in the game was secure.

I remember the afternoon when I was certain he was finished as a footballer. It was late in the 2018 season and the Cats were narrowly beaten by Hawthorn. His stats actually weren’t that bad – maybe 20-odd touches. But he could barely kick the ball more than 25 metres. He looked slow and frustrated and old. He looked like a footballer who’d been asked to do too much. The team, and the club, looked at the end of the road. Their finals performance against Melbourne a few weeks later was pitiful. Many of the stars of this year’s premiership had career-worst games.

Chris Scott and the club refused to rebuild. “No acquiescence to equalisation,” he said. Selwood ploughed ahead, though he had to be nursed through seasons. But the Cats were still neither here nor there as a team. This time last year, they were humiliated by Melbourne in a preliminary final. In hindsight, their season went up the spout when Tom Stewart wrecked his foot right in a regulation training drill, just as the players were about to come off the track. Max Gawn’s kick after the siren in the final home-and-away game sealed the deal. The rest was just detail.

They weren’t considered one of the leading fancies this year. For the first month and a half, they were experimenting and tweaking. At times they were exhilarating – particularly in the opening half against Essendon, and in the final quarter against Collingwood. But against Sydney, Hawthorn, and Fremantle they looked a bit flat and confused.

Scott didn’t seem particularly perturbed following those losses, which was unusual for him. In previous years, they’ve seemed spooked by the big occasion, and by heaving, unfriendly crowds. But they finally stood up in those games. Against Richmond, Port Adelaide and twice against Collingwood, they were on the ropes at times but weathered the punches.

The Richmond game, one of the best in years, was a turning point. The Tigers have been in Geelong’s head for half a decade now, and they were in menacing touch that night. Every other Geelong side of the last 10 years would have lost that game. But they found a way, and didn’t look back. They ended up winning 16 on the trot, and won their last two by a combined 25 goals.

James Button concluded his history of the Geelong Football Club with a comment from then football manager Steve Hocking. “Don’t try to over-explain what happened here,” Hocking told him. “There’s a mystery to it. Leave a bit of that mystery. Trying to explain it in words is like trying to catch the wind.”

But there’s nothing mysterious about Chris Scott, or about Joel Selwood, or about this Geelong side. Their stars aren’t the unknowable, taciturn figures of the Bomber Thompson era. It’s hard to think of three footballers who have given more interviews than Dangerfield, Hawkins and Selwood. There’s no real mystery to the way they play, either. For so long, Scott was executing moves and pulling stunts that left the fans baffled. He was an inscrutable, gnomic figure. This year, he seemed to have complete faith in his players. The game plan was fairly straightforward. Every week it was as if he’d say to his opposition coach: “this is how we play, good luck countering it.”

There’s no real mystery over Joel Selwood’s next move either. There was a finality to Saturday – the banana goal, the tears, the speech. In a week that laid bare everything that is wrong with the game, watching him hand his boots to the Auskick boy was a lovely touch. He’s led an almost perfect footballing life. But he needed that premiership as captain. It’s hard to think of a footballer who deserved it more.