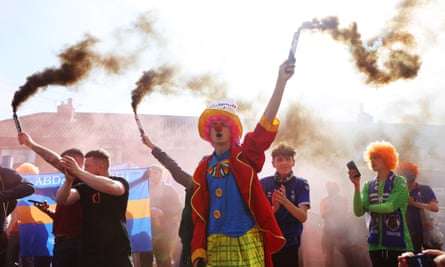 Greater Manchester on derby day feels like a place on the cusp of a great awakening. All morning the trains pull into Piccadilly and Oxford Road, spitting their cargo on to the streets. The pubs begin to swell and heave. Everyone seems to have somewhere to be, even the people who don’t. And then the great gathering flood: a wave of red and blue washing through the city, powered along by songs, San Miguel and a skittish nervous energy, picking a careful detour around the half-and-half scarf sellers. For a few restless hours, this city feels like the very centre of the footballing universe.

And by many measures, of course, it is. Come 2pm on Sunday the gaze of the world will be fixed on the latest instalment in the City/United rivalry. No other city in the world – not Milan, not Madrid, not London – can boast two clubs of this size or wealth. The conversation will flow in a dozen languages. The sweeping curves and coiled towers of the Etihad Stadium will be beamed into almost every country on Earth.

Welcome to Manchester. Or at least, a bit of it. For there are other panels in this city’s great tapestry of football. It’s just that they feel a little more peripheral these days, a little less essential to the whole. A few miles away to the east, Oldham are preparing for the visit of Wrexham in the National League. To the west, Bolton are hosting Lincoln City in League One as they try to rebuild along the progressive passing principles of coach Ian Evatt. To the south Stockport County, still high on the thrill of their first Football League campaign since 2011, face Walsall at Edgeley Park.

To a greater or lesser extent, these were once all considerable names in the English game. Bolton, Wigan Athletic and Oldham were Premier League clubs. Bury and Stockport County briefly scraped the second tier. Just over the border you had the perennially overachieving Macclesfield Town. And so 15 or 20 years ago Manchester was the engine room of English football: an area rich in small-town clubs punching above their weight.

One by one, and to varying extents, they have all taken a tumble. Bury and Macclesfield disappeared off the map altogether. Oldham, Bolton and Stockport have come perilously close to following them over the cliff edge. Rochdale, a fountain of relative stability in recent years, currently sit second bottom of League Two. Since 2020 there have been just four clubs from Greater Manchester in the top three divisions, the lowest since the early 1980s.

The Manchester derby may be the biggest, but it is not the only show in town this weekend. Bolton entertain Lincoln in League One on Saturday; in League Two Stockport face Walsall at Edgeley Park while Rochdale host Doncaster and Salford City take on Grimsby. Oldham play Wrexham in the National League but Wigan have a Championship away day over at Rotherham. Two phoenix clubs are also in action: Bury AFC are at Clitheroe in FA Cup qualifying while Macclesfield host Bootle in the Northern Premier League West.

Naturally there have been distinct local factors at work: malign owners, bad choices. But taken together the broader picture is of a region fighting to remain relevant amid the mighty gravitational pull of the two superclubs at its centre: a ceaseless battle not simply for players and fans, sponsors and eyeballs, but for a basic identity and purpose.

It’s hard to say when the tide began to turn. The relegation of Bolton in 2012 and Wigan in 2013 reduced the Premier League’s Manchester contingent from four to two, where it has remained ever since. Around the same time Stockport and Macclesfield’s long stints in the Football League came to an end. Macclesfield would be back, but ironically it was the debts they accumulated in their push for promotion in 2017-18 that would spell the beginning of the end for them.

Bury’s problems were also evident many years before they finally succumbed: under the stewardship of previous owner Stewart Day the club took on unsustainable debts secured against the club’s Gigg Lane ground. Neither Day nor Steve Dale, to whom he sold the club in 2018, ever looked remotely capable of dragging Bury away from the brink, or caring enough to do so. And so, eventually, it collapsed: 134 years of community heritage simply deleted from the database.

Oldham’s ignominy was finally complete with their relegation last May. They were the first former Premier League club to be demoted to non-league football, having endured winding-up petitions, transfer embargos, a carousel of managers and fan protests against the loathed ownership of Abdallah Lemsagam. And as with Bury and Macclesfield, their fate was the product not just of mismanagement but of wider neglect: the absence of the structures, oversight and basic care that should have alerted the game’s custodians to their plight.

To be clear: none of this is really the fault of Manchester City or Manchester United on their own. Like all big clubs, they are simply creatures of the market, their primary purpose to grow and to consume. Rather, the plight of their neighbours is a mirror to wider trends in the city: one that has enjoyed a great influx of wealth and investment that has not, by and large, been spread around the area as a whole. You only have to compare the gleaming glass developments of Manchester’s city centre with the stasis and underinvestment of its satellite towns, with their decaying high streets and increasing inequality.

There are signs of life. Oldham turned the page in the summer, with a new owner in local businessman Frank Rothwell and now a new coach in David Unsworth. Stockport have unveiled grand plans to redevelop Edgeley Park and increase its capacity to 20,000. Wigan stormed to the League One title last season. The rise of Salford City is evidence that with a little investment and a little foresight, there is still a market out there for community football. And as if to prove the old truism that it is impossible to ever truly extinguish a football club, Macclesfield and Bury have both reformed under new ownership.

All surviving, but none truly thriving. And as the clock ticks down towards Sunday afternoon at the Etihad, it is possible to wonder how much bigger this fixture needs to be, how much hype it really needs to have, whether there comes a point where this grand spectacle begins to drain the oxygen from its surroundings. We’re not changing course any time soon. But this is, perhaps, a weekend to remind ourselves that the clubs of our small towns will not subsist on goodwill and good memories alone.