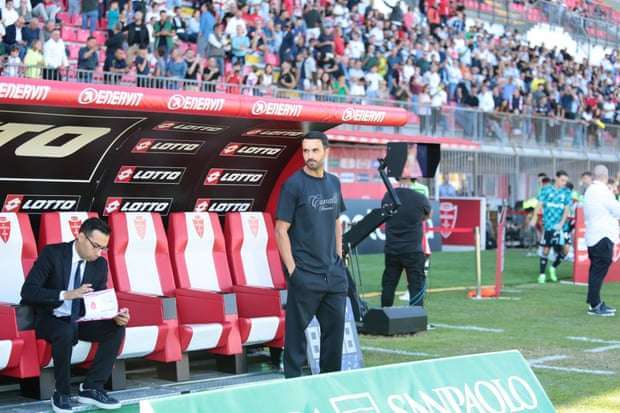 Not even Raffaele Palladino’s own boss could provide insight into his management style at the start of the weekend. “I don’t know him well enough to give comparisons,” said Monza’s president, Silvio Berlusconi. “He has worked for a while in our youth system. With our tireless support and technical advice, just like we offered to coaches at Milan for 30 years, I believe he will do well.”

The sentiment was echoed by Berlusconi’s right-hand man, Adriano Galliani, who evoked Arrigo Sacchi as evidence of how well things could go when they make “courageous choices” together. Even this, though, was comparing apples and oranges. Sacchi had already been the manager of Rimini and Parma before they hired him for the Rossoneri in 1987. Palladino has had a year each with Monza’s Under-15s and Under-19s.

This was hardly a straightforward moment to be handed the reins to the senior team. Monza, playing their first-ever season of top-flight football, had collected only one point from six games under Giovanni Stroppa. Their goal difference was minus-11. Oh, and the next match was at home to Juventus.

Perhaps Palladino relished that last detail. As a player, he spent several years with the Bianconeri, scoring goals by the bucketload in their academy, heading out on loan for two seasons and then returning to help fire them to promotion from Serie B after they were relegated as a result of the Calciopoli scandal. Although he was sold a year later, a mutual fondness remained.

More than anything, though, he just seemed excited to have his shot at managing for real. “I’ve lost my head for this work,” he said after his appointment was confirmed. “I’m in love with it.” By the end of Sunday, Monza’s supporters would be in love with him.

For the game against Juventus, Palladino adapted the 3-5-2 used by Stroppa into a 3-4-2-1. The changes to Monza’s shape were mostly subtle – Matteo Pessina nudged up from midfield and encouraged to swap flanks freely, while centre-forward Dany Mota dropped deep in the middle.

Palladino’s biggest innovation was to give Patrick Ciurria, who has played mostly as a forward in his career, his first start of the season at right wing-back. The manager wanted his team to play with a high line and saw an opportunity to achieve it by being aggressive down the flanks.

In another year, that might have seemed like reckless audacity. Against this season’s meek Juventus team, rather less. Massimiliano Allegri’s side were, technically, undefeated in Serie A, yet they had drawn four out of six, as well as losing both Champions League fixtures. Most recently, they had been humbled at home by Benfica.

Monza showed them no deference, setting the terms of engagement and determining where and how the game would be played. The same limitations they had shown through the first six games of this season remained, and scoring chances were rare, but they occupied the parts of the pitch that they intended to and refused to be overwhelmed by the occasion.

Instead, it was one of Juventus’s most experienced players who lost his head, Ángel Di María sent off for throwing an elbow at Armando Izzo in the 40th minute. The half-time interval offered Juventus a chance to regroup, to rediscover that spirit of defiance that used to carry them to victory regardless in situations of adversity.

They couldn’t. Instead, Monza came out for the second half emboldened, pushing even higher up the pitch. In the 55th minute, Palladino sent on Christian Gytkjær to replace Mota. With a quarter of an hour to go, the substitute slipped behind a lead-footed Federico Gatti to meet a cross from Ciurria and slide it in at the near post.

Gytkjær was the hero of last season’s promotion playoffs, scoring twice away to Brescia in the semi and three times across a two-legged final against Pisa. His goal on Sunday delivered their first-ever top-flight win. Eight minutes of second-half injury time were still not enough for Juventus to find a response.

This was an astonishing, giddying result, for the hosts, enough to reduce Galliani to tears. He had missed the goal, continuing a tradition he began last season of leaving the stadium to pray at Monza Cathedral. This is the city where he was born, and the team he supported as a child. As he reminded reporters before kick-off: “When the president Berlusconi and I arrived we were in Serie C and losing to Giana and Albinoleffe.”

There is a less romantic way to tell the same story. Monza’s climbing of two divisions in four years since Berlusconi’s takeover was made possible by the former prime minister’s wealth. They recruited aggressively again this summer, signing players such as Izzo from Torino, Pessina from Atalanta, Marlon Santos from Shakhtar and Stefano Sensi from Inter.

Money talks but, as their dismal start to this season shows, it is not enough on its own. Time will tell whether Palladino can elevate them to a consistently higher level than his predecessor Giovanni Stroppa, but on a day of eye-catching results – from Udinese beating Inter 3-1 to Atalanta extending their unbeaten start with a 1-0 win over Roma, then Napoli toppling Milan at San Siro – it was he who pulled off the most astonishing upset of all.

Defeat is not expected to cost Allegri his job at Juventus, though many supporters had been vocal even before this result in calling for him to go. Andrea Agnelli has never yet fired a manager mid-season during his 12 years as club president, and the Juventus CEO Maurizio Arrivabene told Dazn before kick-off that: “Changing manager would be folly. Holding summary trials to find someone to blame doesn’t help anything.”

Allegri, who watched from a box as he served a sideline suspension on Sunday, has recovered from worse positions than this. In 2015-16, his Juventus team had eight points after seven games but finished the season as champions on 91. This team could look very different when Paul Pogba and Federico Chiesa return from injury.

How much damage, though, will be done before then? Allegri has said previously that this season will play out more like two separate campaigns – one before the World Cup and another after. The objective for this first part, in his view, should simply be to stay in contention. In that light, it is the European results which look most damaging, with a very real prospect now that Juventus could exit the Champions League at the group stage.

For Juventus’s board, any competitive considerations are complicated by the four-year contract they handed Allegri last summer, placing him alongside José Mourinho as the best-paid managers in the league. The club is expected to post losses of more than €240m on accounts for 2022. As Arrivabene joked to one fan who called on him to sack Allegri before the Benfica game: “Are you paying for the next one, then?”

Juventus believed they were taking the safe choice when they rehired Allegri, going back to the guy they knew best: the one who had been there and, domestically, won it all. On Sunday, they were beaten by the club who gambled on a man who had never coached a senior professional team before.