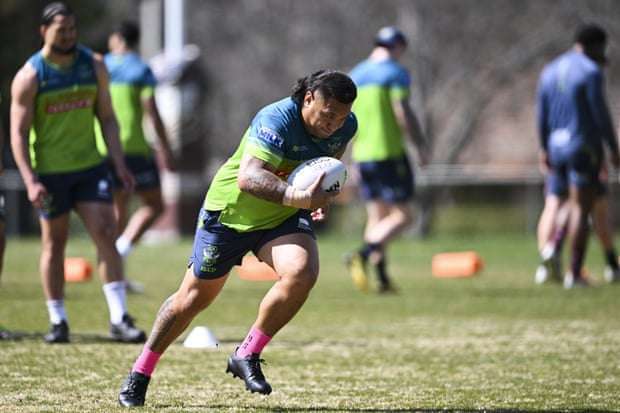 And then there were six. Goodbye Sydney Roosters, see you later Melbourne Storm. Buckle up, because week two of the finals series is here. For a reason escaping just about everybody except the NRL, there are three weeks still to go but we have already reached the “semi-finals” stage. But stranger things have happened in rugby league. And more curious turns could be taken yet. Penrith and North Queensland are now sitting pretty in the preliminary finals and will watch as Parramatta, Canberra, Cronulla and South Sydney play for the privilege of facing them with a grand-final berth on the line.

Not only do Parramatta face a trickier route to the grand final given their chastening 27-8 qualifying-final loss to Penrith last weekend, but they may also have to play for their season without Mitchell Moses. The half-back is navigating the NRL’s concussion protocols after failing a HIA following a worrying head knock during the Panthers game and, while he insists he is fine to return to the field, doctors may yet rule otherwise.

Moses has this week made a plea for involvement but should he be ruled out, coach Brad Arthur may call on his son Jake to help the Eels progress past week two of the finals for the first time in five attempts since 2017.

With a rare window of opportunity to make the most of, Arthur will be counting on home support against a Raiders outfit which notched a fifth consecutive win to the tune of 28-20 against the Melbourne Storm in last Saturday’s elimination final. The only sour note on that front was Adam Elliott. Or, more specifically, Adam Elliott’s hip, which gave the lock so much grief he called it a night after 30 minutes and could well be forced to sit this one out.

Still, they have Josh Papalii and Joe Tapine in their armoury – two weapons that could yet spring an upset – and an unpredictability that was on show against the Storm. Having won only one of their past five matches against the Eels, this is a tallish task, and Ricky Stuart can only hope props Junior Paulo and Reagan Campbell-Gillard have an off night.

The winner of Friday night’s match scores a preliminary-final date with North Queensland in Townsville.

The Sharks may be hosting at Allianz Stadium but it probably won’t feel like it this deep in Souths territory and against a team coming off a an important win at this very venue. The Rabbitohs enter with confidence levels about as high as some of the tackles in last weekend’s wild elimination-final win over the Sydney Roosters. Cronulla, meanwhile, must recover physically and mentally from their 93-minute, golden-point loss to North Queensland.

The sheer physicality and chaos of the Rabbits’ 30-14 triumph – featuring an NRL-era record seven sin-binnings across the board – has left its mark. Tom Burgess is ruled out after Souths accepted a two-match suspension for the enforcer’s grade-two careless high tackle charge over a clash with James Tedesco, meaning he will play no part in his side’s campaign until the grand final, should they make it.

There is something to be said for what breaking the Roosters’ eight-game winning streak can do for self-belief, as Jason Demetriou’s squad look to become the first NRL-era team to win a premiership from outside the top four. The key for the players will be harnessing that positive energy while moving on from controversy. Latrell Mitchell on Monday night posted on Instagram suggesting Burgess’s ban should be deferred and then re-addressed the issue on Tuesday. “Like Peter [V’landys] said, it’s letting the fans down,” Mitchell said. “Tommy is a big part of our DNA. He will definitely be missed. There is an argument to be made, and it is up to people higher up than me and the club.”

Much of the weight will sit on the shoulders of in-form duo Mitchell and Cody Walker, and both have committed to avoiding being drawn into any tit-for-tat with Sharks players attempting to unsettle them. “I think both of us are aware that teams are going to try to bait us and do that sort of stuff to us,” Walker said. “It’s about us being mature and not falling into that type of game and playing our style of footy. That’s what we did [on Sunday].”

The Sharks have enough form on their side not to need skullduggery, with the halves pairing of Matt Moylan and Nicho Hynes in fine fettle and a heap of muscle up front, which helped them win the only meeting this year with the Rabbits in July, when they reigned 21-20 in golden point.

Saturday’s winner plays the Panthers in the second preliminary final.