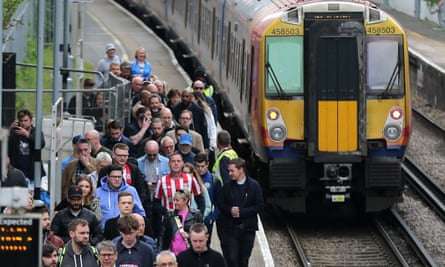 There is a theory that the health of a society should be measured by the state of its drains. The Romans? You could drive a chariot down there. On the other hand the rail network does a pretty good job too as an anatomy of care, planning, hope and indeed the ability to make some very simple things work.

This is a spectrum that runs all the way from the Mount Fuji bullet train gliding off into its frictionless calfskin-leather future; and terminates on a rain-sodden Sunday night platform at Crewe as the words “Avanti Trains regrets to announce …” emerge from the semi-functioning PA, and a sweating man in a tracksuit asks for the fifth time if you want to buy a bag of meat.

It is always a good time to talk about trains. And this weekend is a uniquely bad time for Britain’s uniquely bad trains, for their interaction with sport, and with football in particular. To be clear this is by no means a criticism of striking train staff. These striking workers are, in the end, the saviours of the train network, not the part that is crippling it. Support them. They’re telling you what is wrong with this thing.

But the fact remains that anyone wanting to travel this weekend faces a tidal surge of accumulating horrors, even perhaps a moment of decisive crisis. There are over 150 football fixtures scheduled in England, Wales and Scotland, from men’s and women’s elite tier to FA Cup early rounds. Has there been a more difficult, cripplingly expensive, and generally dysfunctional weekend for those who travel to watch sport, who basically make this industry exist in the first place?

This starts with the state of the timetable. There are trains to some places. But in most cases, London to Manchester, for example, you can’t book a ticket and will simply have to turn up and hope for the opportunity to press your face into a grease-filmed window for two and a half hours.

Other journeys are unworkable. If you want to follow Bristol City to QPR the last train back leaves before the final whistle. Should you want to see Millwall play Blackburn the only way there by public transport is to catch a seven-hour bus, off on Friday, back on Monday morning, at a total trip cost of up to £300. You cannot – and I will not – put a price on the sight of an unleashed Murray Wallace rampaging forward from left-sided centre back. But that is the price currently.

Even without a strike there are serious problems in making any kind of football trip. The trains are terrible by default, wracked with cancellations, overcrowding, and even (ladies and gentlemen: Avanti West Coast) ghost trains that never existed in the first place.

For an operator like Avanti the strike is almost a blessing, a way to mask its everyday failures, a service so appalling it manages the incredible task of making the Virgin Pendolino look like a sunlit age of customer care. At times it just doesn’t seem to add up. Why run a train company at all when your model involves treating passengers as an irritating daily inconvenience? But this is also structural. The easiest way to make a profit on these trains is to cut costs. So everything gets shabbier by design.

Football trains give you other insights too, a front row seat along the nation’s trunk lines. And it is a jittery, slightly wild place right out there right now. People are being forced into uncomfortable spaces.

There is often friction. Weekend journeys are routinely broken by police stops (Milton Keynes, home of the hi-vis intervention). Train staff have been asked to deal with this, and have, in my experience, gone above and beyond in their care. It must be hugely stressful. In fact, for all the reflexive disdain for club football supporters it is a measure of everyone’s self-control that things have gone as well as they have.

Add to this the exorbitant cost of tickets, the underlying rise in the cost of everything that relies on energy (ie everything) plus non-refundable hotel costs. Little wonder the will to travel to watch football might be severely tested.

Plus of course the demands of TV and thoughtless scheduling feed into this. There is no sensible connection between kick-off and travel times, no interest in the problems caused by moving games. There are major fixtures before the World Cup that still don’t have confirmed kick-off times. How do you plan for that, or maintain enthusiasm to be present, to act as the actual human grease that makes this whole thing work?

And this is the key point, because something else is being degraded here. Travel, mobility, access: these are basic rights, essential to happiness and economic growth. Football is a small strand in this. But spectator sport did also grow out of this urge to travel, out of the Saturday half-day holiday and a rail network that gave the masses freedom to move.

This is the soul of this thing. Being there, physical presence, the will to keep going are what has made this industry work. Away fan energy, the basic kinetic power of pointing and shouting, is why there will never be a super league here (until there is suddenly a super league).

But it is also the case that the match day experience is no longer where the real money is, secondary in any future model to digital revenues. So it becomes ever more diminished. VAR is a part of this, operated in a way that makes those present secondary to the spectacle.

A winter World Cup, fixtures staged at impossible times. All of this says: we will stretch you thin, will take all you can give because, for now, you are willing to give it. And yes, just in case that message has got lost somewhere in here, the trains are buggered once again.