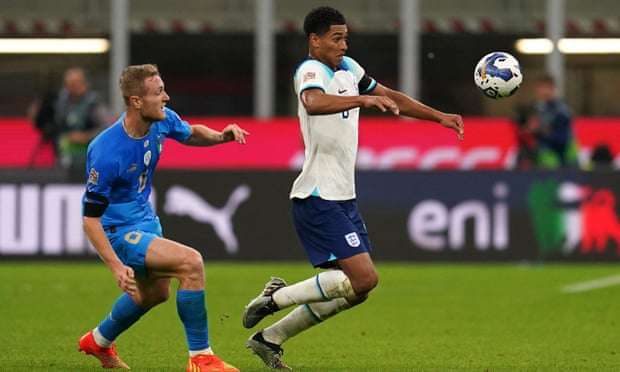 Well, it’s a weird World Cup anyway. Does it count? Just a thought, but is it actually too late to boycott? Norway did the T-shirts you know.

For Gareth Southgate and England this was another stumbling step towards Qatar 2022. What is the ideal, the perfect prep for these four-yearly moments of destiny anyway? How about not scoring a goal for almost 450 minutes of open play? Can we spin it? How about getting relegated, as England now have been, oddly enough? At the very least it would be hard to accuse Southgate’s team of peaking too early, of risking a loss of momentum.

Six years into the age of Gareth, it has to be said. This is the most feeble, the most incoherent this team has ever looked. At San Siro they were terribly poor for half an hour. And poor in a confusing way. Because on paper this was a progressive looking England team. Eric Dier in the central quarterback role! Jude Bellingham and Declan Rice: this is a delicious looking midfield pivot. Kane-Foden-Sterling: craft, skill and all-time bloody minded goal-finagling. Even the wing-backs looked excitingly fluid, as an idea at least.

And San Siro was a wonderful otherworldly spectacle at kick off, a vast Brutalist spaceship dumped down in the middle of a fragrant treelined suburb, with its huge clanky robot legs, the enormous expanse of damp September air beneath its flying slab roof. This place has been slated for redevelopment, bulldozing, projection into deep space via an enormous hyper-canon. It will be missed, if only for that sense of event glamour of pilgrimage, of football-kitsch.

A stage fit for, well , what? This wasn’t just a bad game. It was a weird game, with something mummified and vague, football played through a smeared piece of glass. Italy looked vaguely present. England seemed haunted by relegation, ratting to stay in this league.

From kick off England were ragged and jittery, a team playing with petrol station ball, always bouncing too high, always skewing away off the toe, buffering in the wind. Somehow the players always seemed to be facing the wrong way. For Rice and Bellingham much of the opening ten minutes was spent trying really hard to turn around.

And through those opening exchanges the ball just looked softer in Italy’s hands, softer, happier, more easily tamed, curving in a more elegant parabola between the blue shirts.

They looked in those moments like England 1.0, Olde England, England of the paranoid touch and fearful pass, England for whom the ball is a ticking parcel to be hurled away as quickly as possible. Ghosts of England past seemed to stalk the fringes, the sweating centre-half in sledgehammer boots. The midfielder who gallops and sprints and grimaces and seems to find every moment of the game a kind of torture. Forwards who hunt and scrap for leftovers like dogs at a barbecue.

The first moment of clear air came on 22 minutes as Phil Foden came deep, found space, flipped the ball back to Bellingham, who sent Reece James easing off into open green space on the right. Nothing came of it, nothing happened, no incision, no sense of danger or clarity. But it was still a thing. Raheem Sterling was having one of those nights where he seems to be playing on the jagged volcanic crust of the planet Mars.

With 36 minutes gone Sterling picked up the ball 45 yards from goal in space, and just ran forward wildly, heading waggling, eyes on the swivel, like an impala bolting for the water hole. He decided to spank the ball really hard at Kane’s neck. Which is definitely an option.

Only Phil Foden seemed to have escaped in the first half, sniping into space, dropping deep, looking as though he actually felt ok about being in close contact with an inflated leather sphere.

Teams are odd things. It is quite rare to see an entire infected with shared ennui in this way.

And then with 67 minutes gone somebody remembered what to do. It was a goal, a moment, a game-saving note of grace made by the toe of Giacomo Raspadori’s right foot. Italy’s No 10 had pulled off the back off Kyle Walker. Leonardo Bonucci spotted it, with time to float a perfect straight pass into the arc of his run, and as it dropped over his shoulder Raspadori caught it, mid-stride with his toenail perkily extended. He checked back, he saw space and angles and time to shift his weight, then bent a low, hard shot past Nick Pope’s left hand.

England pressed harder after that. They created energy if not any real sense of pattern, and never really looked like scoring. The World Cup is now one game, and two months away. Football can be a fickle thing, change can happen quickly. But this team just seems to have lost its forward gear.