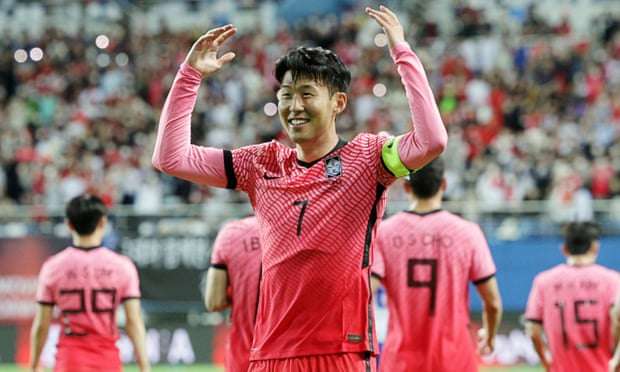 Son Heung-min’s spectacular 13-minute hat-trick against Leicester on Saturday ended his eight-game barren run, or ‘silence’ as it was called in South Korea. As those Tottenham matches came and went without a goal, the mood back in east Asia grew ever gloomier, becoming darkest just before the Seoul dawn last week when the forward was substituted in the 2-0 defeat against Sporting in Lisbon.

However much was said in England about a dry patch that felt longer because it stretched from the start of the season, the conversation was louder in the Land of the Morning Calm. With the Taeguk Warriors’ hopes of a place in the knockout stages in Qatar looking to depend largely on Son’s form and fitness, worries were understandable but it could be that some bench time for the megastar would not have been the worst thing for South Korea’s World Cup hopes.

The last time the 30-year-old arrived at Incheon International Airport was in May when he held the Premier League golden boot aloft for adoring fans and excited photographers. The three goals at the weekend mean that, when he steps off the plane from London to play in warm-ups against Costa Rica on Friday and Cameroon four days later, it is less likely that he will receive the kind of questions that were fielded by the national team coach, Paulo Bento, last week when the Portuguese was asked about his captain. “There is no concern and I feel the same as when he’s scoring a lot,” Bento said. “We will focus on what we must do in these two games and I have all the confidence in him as usual. I do not intend to talk to him about it.”

Perhaps there should be a conversation in South Korea. These past few weeks have highlighted how one player dominates the national team landscape to an extent that may not be healthy for a country that has long wrestled with the challenge of how to bridge the gap between being an Asian powerhouse and becoming an established global player. For the first time in years, since perhaps 2015 when he signed for Spurs from Bayer Leverkusen, Son was not looking like Son and nobody knew what to make of it. The sight of the forward on the bench as the game started on Saturday made headlines in north London and South Korea.

The forward has, over the last four-year cycle, played more than most and travelled more than pretty much anyone. For his club there have been punishing English and European commitments as well as the occasional north American and east Asian tour but he has really racked up the air miles for his country. There was the 2018 World Cup in Russia, the 2018 Asian Games in Indonesia (where he helped the team win gold and himself get exemption from military service, though he still had to spend three weeks training in 2020) and the 2019 Asian Cup in the United Arab Emirates. Add qualification for Qatar with games all over Asia, plenty of home friendlies (the London-Seoul round trip is a punishing one that Park Ji-sung ended up struggling with when at Manchester United) and a wide range of commercial activities – it is almost easier to ask what South Korean companies he doesn’t advertise – and there have been a few whispers of late wondering whether he has taken on too much, off the pitch – from a hugely marketable star then it would be a surprise if Son had not been feeling a little sluggish.

The hat-trick probably means less bench time for Spurs in the lead up to South Korea’s 10th successive World Cup with group games against Uruguay, Ghana and Portugal. It is unlikely there will be any rest for his country because he has been selected by Bento whenever the opportunity has allowed, whether it be competitive or friendly.

There have been a few criticisms of the coach’s four years in charge and a big one is that he does not seem to have found, or even tried to find, a way to win games that does not depend on Son.

That could perhaps explain why there have been times in the past when Son has shone brightly for Spurs but looked less happy when wearing the red, or whatever shade of the colour Nike insists on manufacturing, of the 2002 World Cup semi-finalists. The burden of expectations of an entire nation can be heavy and the 30 year-old often tries to do too much himself.

Media in South Korea breathed a sigh of relief on Saturday but it would have been fascinating had Son not played or scored against Leicester, to see how all sides would have handled this international break. The Chuncheon native has usually come home full of smiles and goals, only to look laboured for South Korea. So perhaps club troubles and a spell on the bench could have produced something different at national team level. Given his weekend heroics, we will probably never know.