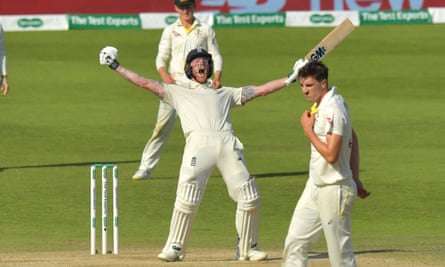 It’s the design that hits you first. The soft, translucent swatches. Teal for the soothing, explanatory stuff. Bold navy blue for the action points. Coloured boxes with clean, bevelled corners and arrows directing you to the next coloured box, like signs in an airport terminal. The cover design incorporating hundreds of dotted lines, evoking the seam on a cricket ball, but also – eureka! – the road markings on a superhighway to the future.

Yes, I read Andrew Strauss’s high-performance review so you didn’t have to. Although as ever, interpreting the gist of these documents is not so much an exercise in reading as cryptography. We are told that a High-Performance NED and a PCC will be set up, advised by a PAG, in collaboration with FCC leadership, to improve our shared understanding of WITTW. (Non‑Executive Director, Performance Cricket Committee, Performance Advisory Group, First-Class Counties, What It Takes To Win. Come on, guys. Do the work.)

I do not propose to offer a substantive analysis of Strauss’s manifesto here. There is plenty in it that is urgent and reasonable, benign and enlightened. It leans a little heavily on historical data, particularly when the overarching premise is that the sport is rapidly shifting beyond all recognition. Above all, given the wild uncertainty of the terrain, it seems terribly sure of itself. But I struggle to get exercised either way on the detail.

In fact, I’m going to level with you: I genuinely couldn’t give a flying FCC what ball they use in the County Championship, whether they play the One-Day Cup in April, August or on Thursdays when the moon is in Pisces. This probably makes me a Bad Cricket Citizen (BCC). But I didn’t get into cricket to have arguments on scheduling and nor did you. I love cricket because of the sense of community and belonging it provides, the routine and ritual, the cold drinks at the boundary’s edge, the geometry of a perfect swinging yorker, the long dark nights of the Wisden Almanack. The way that whatever the game, whatever the format, the longer you stare at it the more you discover.

What you’ll notice is that none of this really comes under the banner of high performance. Ah, you counter, but the 2005 Ashes. Or the 2017 World Cup win or Ben Stokes at Headingley. All incontrovertible proof that the essence of cricketing happiness lies in high performance, in discovering the limits of human potential. How can you cherish these moments without also cherishing the structures and processes that generated them?

But there’s a dirty little secret: high performance demands low performance. Does the monument of 2005 still resonate if England had been dominant for the 18 years that preceded it? Does the Stokes innings feel the same without the prior despair? To the fans who constitute 99.99% of the cricketing universe, high performance and low performance are locked in a doomed dance. There’s a reason why Eoin Morgan remembers the early years of England’s white-ball transformation more fondly than the crowning glories that followed. This was when the friendships were forged, the mistakes made, the fun had. It was also – by a staggering coincidence – when winning mattered least.

Fundamentally, I don’t think Strauss gets this. To his mind English cricket is a project, a problem-solving exercise to be defined by measurable aims and solved with evidence, like an undergraduate essay. The stated goal is for England’s men to be the best in the world – for ever. Can we take a moment to reflect on the stunning bleakness of this objective? Maybe the players and the sponsors and the people who sell tickets want this. I don’t want this. I want England to provide me with indelible memories and a team that proudly represents the best of us as a society. I want them to play in full stadiums with reasonably priced tickets. I want them to win. But I don’t need them to win all the time.

But then you have the creed of high performance, a lucrative sealed world of self-help books and technocratic bullshit, an endless treadmill of task forces and finger sandwiches. Just look at some of the experts appointed to the panel. Dave Brailsford, who at British Cycling built an utterly joyless winning machine that traded medals and glory for the dignity and wellbeing of its participants. Simon Timson, who at UK Sport oversaw a culture obsessed with Olympic medals that indirectly allowed numerous abuse scandals to go unheeded. What do they know of high performance who only high performance know?

Strauss has made his views perfectly clear in the past. “The broader problem,” he wrote in his 2013 autobiography, “is one of volume. Administrators need to ask themselves: ‘what is the best system for producing excellent England cricketers?’ That is where all the revenues for the game come from, rather than what is in the best interests of county members.”

But then, as he has been so keen to stress during his numerous recent media rounds, opinions are what other people have. What he offers instead is Intelligence: dispassionate, empirical, free of ideology and narrow tribalism.

To admit this worldview is a distinct ideology in itself – one geared inexorably towards growth, commodification and transaction – would be to betray the entire dogma of high performance, which assumes that its priorities are by definition everyone else’s priorities. This is what you want, even if you don’t. In any case, the revolution is coming whether you like it or not (WYLION). The PowerPoint printouts are coming around. In the meantime, please help yourself to water and biscuits.