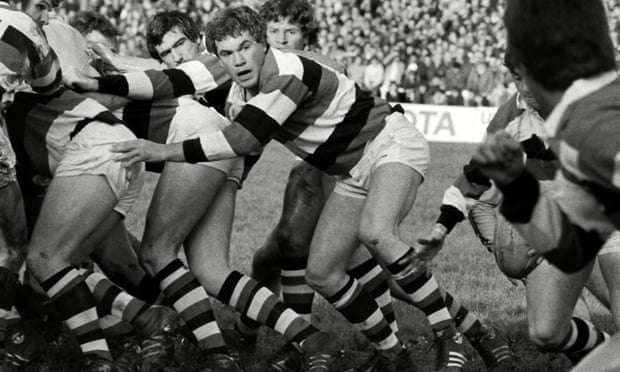 “Greetings, Roberto.” Even when Eddie was just saying hello every word flowed more smoothly when he spoke – or wrote – them. And whether he was chatting with his colleagues in the press box, or delivering those impossibly brilliant, mellifluous television voiceovers, you wanted to hear more. Which, of course, is exactly how we all feel right now.

It is scant consolation that the bard of Monmouthshire packed so much into his 65 years. Rugby player, story teller, commentator, novelist, linguist … there was almost nothing he could not do when he put his mind to it. Not many have ever captained their country at rugby union, been a British & Irish Lion and then become a renowned broadcaster, rugby correspondent and fiction writer as well. Simply to bask in the reflected glow of his multiple talents was enough for the rest of us.

He was invariably modest with it, though, and unfailingly generous even to those of us who had not played for Pontypool in an era when men were men and visiting sides finished a distant second. Those “Pooler” sides were formidably hard-nosed and “Educated Edward” or “Bamber” as they called him (he had studied at Cambridge University) was not selected by accident.

If and when his eyes started to glitter, maybe after a couple of drinks or if someone was in danger of taking excessive liberties, the old steely edge could momentarily re-emerge.

It was all part and parcel of a multi-dimensional life. He grew up between the Usk and the Wye rivers but his grandfather was a steelworker in Scunthorpe and his father was a research manager at the nylon factory in Pontypool. Sometimes he and other “Pooler” players would train on Sunday mornings on the old tramways above Blaenavon and “change with the canaries in their cages” in the shower-rooms of Big Pit which was then still a working mine.

Playing for Pontypool also taught him plenty, not least an appreciation of what unflinching forward play looked and felt like. If there was a soundtrack to those Pontypool Park years it was generally the tinkling noise of metal stud on bone. “We did lose rather a lot of games,” Eddie used to say. “Not on the scoreboard necessarily. We were just struck off other clubs’ fixture lists.”

With us Guardian/Observer hacks, though, he was consistently good-humoured company. If something amused him, a familiar melodic ‘hmmm’ – almost like a cat purring – would audibly emerge. And once his imagination had been engaged, his sense of adventure was never far behind. “Come on, Roberto, where next?” Once, en route to an Observer cricket match in Sussex, he persuaded our then-colleague Norman Harris it would be much more fun to boycott the A-roads leading helpfully down to the coast. We navigated straight across the lot on a gloriously absurd scenic tour of southern England, laughing more loudly by the mile.

When sharing the same rugby pages as Eddie there was also nil chance of his piece cutting across anyone else’s. He was never one to follow the herd, nor to state the bleeding obvious. Assuming, that is, he had actually made the game. Once, heading over to watch Bath v London Scottish at the Recreation Ground, he fell asleep and awoke only as his train was pulling out of Bath Spa station. No problem, he thought, he would hop off at Chippenham or Swindon and nip back swiftly enough. Unfortunately the next stop was Reading. He walked into the Rec just as the final whistle was sounding.

Then there was the infamous Observer column he ghosted for Austin Healey on the eve of the crucial final Test on the 2001 Lions tour to Australia.

When he sought to finalise the column with his new friend Austin, unfortunately the England man was in hospital having a scan. “Write whatever you want,” Eddie was told. The next thing Healey knew he was being hauled over the coals by a livid Graham Henry, wanting to know why he had called the Wallaby lock Justin Harrison “a plank” and “a plod.” No one could ever accuse Eddie of lacking an impressively broad vocabulary.

As many have recalled, some of his televised ‘bon mots’ were equally memorable. ‘Oh, England, what have you done?’ he famously intoned as the home side unravelled at Twickenham in 2008. ‘And Wales, what are you doing?’ Personally, though, I used to prefer teasing him about his archery commentary at the 2012 London Olympics. ‘And there’s another good one from the South Korean…’ It is heartbreaking to think Eddie has now left us and we all send our love to Susan and the family. No more evocative voiceovers. No more ‘Greetings, Roberto’, either. But if you really listen hard, you can still hear it. The timeless voice of all our rugby winters.