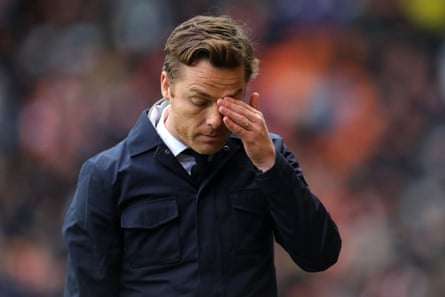 An international break can be a treacherous time for under-pressure club managers. Sackings were expected during the recent run of Nations League matches and friendlies. Even on the morning of the Queen’s funeral there was wide speculation that Steve Cooper would be relieved of his duties at Nottingham Forest. That the announcement had been delayed, suggested the rumour mill, was only out of respect for Her Majesty.

Cooper remains Forest’s manager, and will lead his team into the return of the Premier League. On Monday at Leicester, he will shake the hand of Brendan Rodgers, another manager that WhatsApps and social media ITKs (“In-The-Knows”) were suggesting had been given his cards.

While Watford kept their end up by removing Rob Edwards, in the top division a sack race that began the season in bloodthirsty fashion has slowed. The exits of Scott Parker from Bournemouth and Chelsea’s Thomas Tuchel both came after friction between owner and manager. More than results, the prime reason for managerial departures has become an owner’s whims.

Cooper feeling the pressure after ending Forest’s 23-year exile from the Premier League reflects the dispensability managers in this age of all-powerful billionaires and their egos. The widely speculated sacking-that-wasn’t was put down to Forest’s struggles in assimilating the 23 players brought in by the owner, Evangelos Marinakis, and his operatives.

The days when a manager was the most important person at a club are long lost. The super-agents who curate the lives of star players are often closer to owners than even the sporting directors that managers are often answerable to. Managing upwards can involve joining a lengthy queue. Only the true modern greats in Jürgen Klopp at Liverpool and Manchester City’s Pep Guardiola, and perhaps Antonio Conte at Spurs, could be said to be anything like the leading policymakers at their respective clubs.

For the rest, delivering key objectives can serve as little protection. Despite promotion last season, Parker was shunted by the outgoing owner Maxim Demin, who has financed Bournemouth’s rise from lower-division perennials to Premier League outfit. Though losing 9-0 at Liverpool was unhelpful, it was Parker’s shrugged declarations of his squad being too light for the division, a clear criticism of Demin’s spending, that hastened his removal.

Tuchel was the Champions League-winning coach who had guided Chelsea back into that competition amid the chaos that followed Roman Abramovich being hit with sanctions by the UK government. “You know how glad I am to be here and how much I like it,” Tuchel said on 19 August and yet he was sacked on 7 September, with Chelsea officials briefing that the German’s fate had been decided even before the defeat at Dinamo Zagreb.

The chief factor for Tuchel’s dismissal was his relationship with the club’s owner over 100 days together. “We just weren’t sure that Thomas felt the same way we thought,” said Todd Boehly during that Salt Conference session during which he blue-skied the idea of a Premier League all-star game. “This is a club where I felt at home, both professionally and personally,” wrote Tuchel in the social media post that is his only published response to the loss of the lifestyle he enjoyed in the environs of the Cobham training complex.

Tuchel’s public anguish was doubtless privately tempered by a £13m severance payment, and the opportunities now likely to come his way. Almost immediately, he was linked with Bayern Munich, where Julian Nagelsmann is under pressure, and La Gazzetta dello Sport put Tuchel at No 1 in a top-12 list of unemployed managers, ahead of Mauricio Pochettino in second with Zinedine Zidane third.

La Gazzetta having Claudio Ranieri, 70, in sixth, a place behind Paulo Sousa, last seen at Flamengo in Brazil after managing five clubs in seven years, suggests top-level managers are in short supply, something Boehly may find out should he lose patience with Graham Potter.

Being sacked needn’t be a fully bleak outcome. Healthy payouts offer managers financial independence. Soon enough, new opportunities can be presented. With two promotions, Parker leads the list, perhaps alongside Sean Dyche, for ambitious Championship clubs. Cooper, if and when he departs Forest, is widely recognised for his hefty coaching talent. Had the timing been better he might have replaced Potter at Brighton.

That two further managers around whom speculation swirls, Rodgers at Leicester and Bruno Lage at Wolves, remain in position is a measure of the Premier League’s connection to geopolitics and economics way beyond football. The estimated family fortune of Aiyawatt Srivaddhanaprabha, Leicester’s chairman, dropped from $3.7bn in 2020 to $1.7bn this summer after their King Power duty-free business was ravaged by the pandemic. Fosun International, the Chinese conglomerate that owns Wolves, owes £34bn after a property market crash in its home country. On balance sheets already featuring significant holes, firing and hiring managers is a costly business.

Rodgers has been pointed, provocative even, about Leicester’s transfer policy in a not dissimilar fashion to Parker and yet, despite a worse start to the season than Derby’s 11-point 2007-08 campaign, he remains in charge. Why the impasse? A contract that runs to 2025, and a reported £10m payoff, would be punitive to a club expected to reveal substantial losses for the 2021-22 financial year. Lage, contracted until 2024, also survives, despite Wolves scoring only three goals. Being a client of Jorge Mendes, a football adviser to Fosun, clearly adds security.

Can these situations be sustained? Wolves were similarly patient with Nuno Espírito Santo, another Mendes client, but for other managers another witching hour is imminent. Last season it was Watford – of course – who began a run of sackings on 3 October that claimed five more managers by 21 November. And a season sawn in half by the World Cup offers an elongated, six-week, international break for billionaires to realise their manager isn’t thinking the same way as they are.