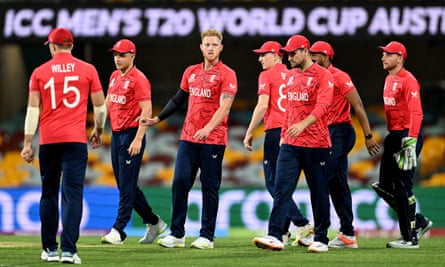 Three years ago, Aramco, the oil giant predominantly owned by the Saudi royal family, underwent a subtle rebrand. And subtle is the operative word here: the company’s distinctive logo, a white star on a blue and green background, remained in place. But somehow the blue was rendered just a little bluer, the green just a little greener, the typeface softened into grey lowercase, the word “Saudi” and the Arabic script above it quietly removed.

This was the logo upon which Sam Curran stood as he prepared to bowl for England against Pakistan in their final Twenty20 World Cup warm-up on Monday, a little heap of sawdust at his feet. At the boundary’s edge, a band of Aramco billboards – blue as blue as the sky, green as green as life – flickered into the Brisbane night. Curran examined the ball in his hands, launched into his hop-skip approach and fixed his gaze on a set of Aramco-branded stumps about 40 yards away.

Does Curran register the existence of these images or the significance of them? Let’s take a wild swing in the dark: probably not. Frankly, why would you? To exist as an international cricketer in 2022 is to be innocently festooned in a jumble of unintelligible words and icons: some ironed on to the front of your shirt, some painted on the grass beneath your feet, some cluttering the fringes of your player-of-the-match cheque. This is just the flora and fauna of your world. To expect a player to question or even scrutinise it is like asking for an opinion of Guernica from an ant crawling across its surface.

Just like that, seamless and unobserved, Aramco slips into the room, pulls up a chair and blends into the canvas. It was only a few days ago the International Cricket Council announced it was awarding one of its top-tier sponsorships to a company estimated to be responsible for extracting the oil that has produced more than 4% of the world’s greenhouse gas emissions since 1965, that has recorded lavish profits as a result of Russia’s invasion of Ukraine, that is owned by a regime that has sanctioned the widespread use of torture and murder for its own ends.

Still, the ICC press release was all about looking forward. There were numerous references to the focus on “sustainability and innovation”, with Aramco recycling machines to be installed at all seven T20 World Cup grounds. “We are delighted to welcome Aramco into the family of ICC global partners,” the chief executive, Geoff Allardice, gushed, with all the beaming pride of a man who feels he is not so much losing any remaining vestigial moral authority the ICC may have possessed on human rights, gender equality or the climate crisis, but gaining a son.

What this is not is a sea change or the crossing of a red line. Nor are we simply referring to the gradual infiltration of tainted money into cricket, from repressive regimes to mass polluters to cryptocurrency firms with a massive and catastrophic environmental footprint. One of the byproducts of sport’s embrace of immoral revenue streams is the way words and messages have become divorced from their meaning, the way administrators and governing bodies increasingly issue statements that are so detached from reality as to be essentially absurd. There are two words curiously absent from the ICC’s announcement of its Saudi oil sponsorship. One is “oil”, and the other is “Saudi”. Do we think they knew? Should someone tell them?

It’s likely the average World Cup viewer would be essentially oblivious of the genesis of this inoffensive lowercase word emblazoned at mid-off, swaddling the boundary rope, printed on the recycling machines. By such means is the word “Aramco” simply and harmlessly absorbed into cricket’s lexical subconscious: the DLF maximum, the Popchips Superchargers, your Aramco player of the match.

In the 1990s, at its Shaybah oil field, Aramco began to pioneer an unusual and extremely expensive technique called horizontal drilling. The idea is that instead of drilling multiple wells in multiple locations, you create a lattice of underground wells going sideways from a single bore, some of them miles long, in order to get at the deep-lying crude reservoirs that would be inaccessible vertically. On the surface, very little appears to be happening. But via an invisible network of tentacles and drill bits, guided by advanced computer modelling, the ground beneath your feet is slowly being sucked dry.

This is how the world changes. Out of view, out of reach, beyond your knowledge, beyond your comprehension, and from the inside out.

What you see – a golf tournament, an Anthony Joshua jab, Bruno Guimarães riding a challenge, Curran licking his lips and gripping the ball for a cross-seamer – is the tiniest fraction of the whole. Which is why it makes no sense to us: a palimpsest of competing words and images whose cumulative effect is a pure confusion that prevents any alternative vision from emerging.

A Durham one-day international played in 37C heat. Byju’s. The murder of Jamal Khashoggi. The ICC’s partnership with Aramco reflects a shared focus on sustainability and innovation. Emirates. West Indies need 98 from 68 balls. India offers tremendous growth opportunities over the long-term, Aramco said in a statement on Sunday. Booking.com. Singh to the left-handers, that’s a smart match-up.

Close your eyes and you can hear it all, and all at once. The sound of an oil drilling rig is steady, low-frequency and monotonous, and some people claim it helps them to sleep.