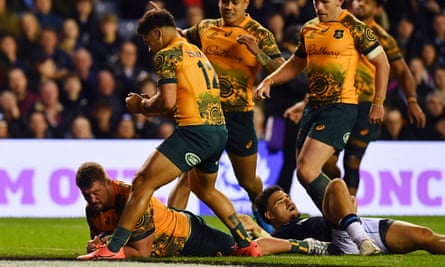 For much of his reign as the Wallaby’s head coach, Dave Rennie has urged the rest of us to focus on his team’s performance rather than the scoreboard. Wins and losses are how most elite sports teams are measured, but the patterns and shapes mattered just as much. At least that’s been the message from the man in charge.

Not this time. A messy and disjointed affair, littered with handling errors and misplaced passes, ended with Australia edging a contest that they probably should have lost. They conceded more tries, made less carries into contact, lost the battles for possession and territory, were forced to make more tackles and coughed up the ball more often when they had it.

Scotland’s Blair Kinghorn, who had been magnificent from 10, had the opportunity to place the stamp of justice on the encounter by slotting a very kickable shot at goal at the death. He hooked it left. The Australians could scarcely believe their luck. How does Rennie feel now that the script has been flipped.

“Relief,” was his single word answer. “Especially with Blair Kinghorn lining up. There was a lot of noise from the crowd so I thought it was going over. So either there were a lot of Aussies or a lot of drunk Scotsmen in the stands. We’re happy though, to hang on.”

Is this a sign of progress? It’s impossible to say. If we should adhere to Rennie’s previous stated aims and analyse the direction of this side based on what they put up, rather than what the numbers tell us, then the signs aren’t positive.

Beyond Rob Valetini, few forwards look capable of offering consistent go-forward ball when charging towards the defensive wall. More menacing packs will be found in the French and Irish ranks in the coming weeks and Rennie will be conscious that his blunt objects lack the requisite force to win the arm wrestle.

This is hardly a revelation for Australian rugby but they have so often had the guile and grace in the wider channels to counteract this weakness. But in Edinburgh, those entrusted with injecting electricity into the attack were unable to flick the switch.

Tate McDermott fizzed with enthusiastic effervescence but was ineffective. Bernard Foley at first receiver often resembled a crab, scuttling sideways in search of a safe space. It was his mistake in the collision that led to the ball being spilled and hacked upfield by Kinghorn who scored from 40 metres out.

Andrew Kellaway was sloppy, Hunter Paisami and Len Ikitau were one-directional in the midfield while Tom Wright and Tom Banks were mostly spectators, yearning for something other than scraps to feed on. It was only when Nic White and his bristling moustache entered the scene on 56 minutes did the men in gold and green find an extra gear.

And yet they won. They begin their five Test tour of Europe with a victory and will fly back to their base in Saint-Étienne in central France with the Hopetoun Trophy in their hand luggage.

“It helps, doesn’t it?” Rennie said in response to a question concerning the lasting impact of this triumph. “We can be a lot better. We had a lot of possession in their 22 that we didn’t convert. We have to be better against France [next week] but it’s nice to get the result.

“We’ve broken our whole game down, we’ve looked at areas where we think we can make shifts that will make a genuine difference to the result. The key for us is to back up tonight with a better performance. We know we’ve got a lot more in us.”

Sat beside Rennie in the post-match presser was his captain, James Slipper, who scored his third Test try in his 112th appearance for his country. Fittingly, it wasn’t pretty – a busting, bursting run from short range after a rare moment of cohesion while Scotland’s Glen Young was serving time in the sin-bin. Not that the veteran prop cared about the optics.

“We’ve had a season where we’ve lost a fair few games in the last ten minutes so it’s nice to come out on the right side of the result,” the Aussie skipper said. “That’s probably the most pleasing thing. The character from the boys to hang in there and keep creating.”

Australia are slowly morphing into one of those ‘you-never-know-which-one-will-turn-up’ teams. They can be magnificent, as they were in their 25-17 win over South Africa and in their agonising two-point defeat to New Zealand. They can be woeful too. Their three other losses in the Rugby Championship this year were difficult to watch.

This display wasn’t too dissimilar. The only difference is the result. Rennie has so often steered the conversation away from the scoreboard. He’ll be more than happy to break his rule this time.