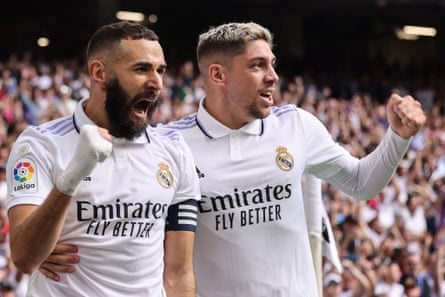 When at last it was all over, Joan Laporta stood up, shook hands with Florentino Pérez and slipped out. For the second time in five days Barcelona’s president had sat front row centre watching things fall apart. He had listened to the Real Madrid supporters he had been so looking forward to seeing again launch into olés, laugh their way through ironic pleas for his coach to stay and invite him to enjoy Thursday nights in the Europa League, and now it was time to leave. He went down the stairs, past the statue of Sotero Aranguren and Alberto Machimbarrena cast in bronze and to the referee’s dressing room. There, according to José María Sánchez Martínez’s report, he “repeatedly asked for an explanation”.

He had come to the wrong place.

There was a moment late-ish in the clásico, about the time it felt like Madrid were just waiting for it to end and Barcelona no longer were – Gavi, Ansu Fati and Ferran Torres on and leading a rebellion – that Robert Lewandowski went tumbling in the area. But while that might have mattered and matches have turned on less, there were many reasons for things going the way they did – not just on Sunday when Madrid beat them 3-1 but beyond it too – and they weren’t to be found in the referee’s room. Nor even 25km west in Las Rozas, where more officials sit in their kit watching replays. There were at least two other doors to knock on first.

At the start of the game, Xavi Hernández had told his players to enjoy it; by the end, they had fallen silent and it was Carlo Ancelotti’s players who did, music on the stereo, Antonio Rüdiger on the dance floor. There had been times when they had enjoyed it on the pitch too, maybe even a little too much. Look at the stats and this was one match; look at, well, the actual match and it was another. In the end it felt a little like it hadn’t been a match at all, the kind of clásico that might have drawn conflicting conclusions but instead brought a consensus. Barcelona, everyone seemed to agree, aren’t all that good.

Barcelona had 56.6% of possession, 18 shots to eight, and more on target too. They had more expected goals and that penalty appeal. Lewandowski missed the kind of chance he just doesn’t, the ball flying over from a yard, and it took a last-minute penalty for Madrid to actually end it. “We didn’t deserve to lose,” Xavi said afterwards, and yet if all that makes it sound close, like maybe he was right, although there were times when you could press pause and draw a big circle round specific errors that sunk them, and much as emotions deceive and betray, it just didn’t feel that way at all. Quiet for a fair bit of the game, it didn’t feel all that much like a clásico. The hate figures – Xavi, Gerard Piqué, Jordi Alba – were all on the bench, not the pitch, which might have been part of the reason it lacked edge but the explanation was probably simpler: it was a bit too comfortable for that.

After Barcelona had drawn with Inter in midweek, leaving them virtually out of the Champions League with two games left in the group, Xavi said they had paid for individual errors, and the same had happened in Munich and Milan. The competition, he said, had been “cruel” to them. Last season’s early exit was a reflection of their reality; this season, they had expected better but been complicit in their own demise, which hurt even more, he said, yet at least there was progress. There is too: this is a better team, they did go to Milan and Munich and play well, and individual errors were responsible in part. Piqué and Eric García on Wednesday, Sergio Busquets and García again on Sunday. There are key absentees too: Jules Koundé was coming back from injury, Ronaldo Araújo is out, and so are Andreas Christensen and Héctor Bellerín.

But it doesn’t entirely convince: Xavi said his team had lost to Inter because of “details”. Small ones, like conceding three goals and countless chances, like being startlingly vulnerable to the simplest of passes. And much as definitive conclusions are a trap to be avoided like Tele5, when errors keep recurring, and things keep happening to the same people, it’s hard to avoid the conclusion that there’s something more, something deeper.

“We should have committed a foul on the first goal,” Koundé said, but Busquets had tried and failed, desperately dragging at Toni Kroos in an attempt to pull him down. “Football is won and lost in the area: you have to be strong in one, effective in the other,” said the sporting director Jordi Cruyff, but perhaps Lewandowski has been disguising other flaws. And it’s not just about the areas: if there was a move that defined this game, it was the one where Barcelona kept the ball for a long time, advanced up the pitch, reached the Madrid players, a white wall … and just turned round and went back again.

Xavi said his team are still not “mature”, and remain in construction, a side that are sometimes not efficient, or decisive. All those levers, and at the end of this game, their full backs were Alba and Sergi Roberto. Pedri looks tired and looks for runs that aren’t happening. Gavi, leading the press, was on the bench. Ousmane Dembélé and Raphinha want to occupy the same space. There is a disconnect between the rhetoric and the reality. Xavi’s record in his opening 50 games is worse than Ronald Koeman’s. They had won seven and drawn one domestically so far this season, conceding a solitary goal, but then let in three in 90 minutes. When it has come to the biggest teams – Bayern, Inter, Madrid, Rayo – they have’t won and Villarreal, Valencia and Athletic are up next.

Here they never truly looked like doing so. The Canadian rapper Drake, whose owl logo adorned Barcelona’s shirts making it look like they had been sponsored by Sheffield Wednesday, bet $800,000 but didn’t come close to cashing in. Barcelona, complained the front of Sport, had “no soul”. They committed just one foul in the whole of the first half. El Mundo Deportivo called them “fragile”, Marca likened them to a poor copy of the original, El País said they don’t know what they are any more, and El Mundo described them as a “toy” in Madrid’s hands, Paco Cabezas writing: “Once, they wanted only to play; then they wanted only to win; now they want only to survive.” His colleague Orfeo Suárez had come back from the bakers. “Barcelona are the merengue,” he wrote, “Soft, dissolving, but not sweet.”

They had been beaten but it could have been worse, Santi Giménez really laying into them in AS. “Xavi’s nude and he’s not an emperor,” he wrote. “Madrid won with their hands in their pockets, whistling. Barcelona could be grateful that Madrid didn’t turn the wound into a haemorrhage. If they had taken this half seriously, they could have scored a sackload. If they had needed seven, they would have scored seven.”

That’s pushing it of course, and Ancelotti didn’t much like the idea that Madrid had eased off. He insisted “we pressed down on the accelerator until the end”, but it was true that when a third, scored by Karim Benzema, was ruled out on 58 minutes it didn’t seem to matter that much. Soon there were olés, the ball moved round at will, no need to go anywhere in particular, just to play, and to play this out, gliding towards a victory. The fans sang, Laporta listened, and it was all done, or so it seemed – which might have been the reason it wasn’t. Gavi came on, immediately confronting Ferland Mendy and committing four times as many fouls in half an hour than anyone else in the entire match, bringing life back and making his initial absence even more baffling. A brilliant run from Fati set up Ferran Torres to make a game of it.

Briefly, at least. Ultimately, Madrid got a third and although it had become close Marca’s headline simply said “very superior”, which didn’t make them wrong: they had been every bit as good as they had to be, a team that always seems to know what’s needed, a kind of humility and solidarity to go with the talent, a maturity and variety. “Having just one style is not the best idea,” Ancelotti said.

If there was only really one run free from Vinícius, it was enough. Aurélien Tchouaméni saw everything earlier than anyone else. Benzema scored again. Eder Militão fought Lewandowski, and mostly won. Rodrygo was decisive again. Defying time, dictating it too, Kroos and Luka Modric were superb in the midfield and Fede Valverde was brilliant in whatever his position is, which is all of them, the man who has four lungs scoring his fifth of the season to leave Kroos placing him in the best three players on the planet. Madrid’s position meanwhile, is top again, celebrating at the end of a clásico that left Laporta knocking on the wrong door for an explanation, turning to the referee’s room when he could have carried on down the passageway to the one the music was coming from or looked a little closer to home.