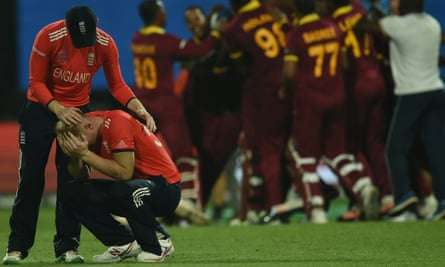 Shut your eyes and it’s not hard to picture the enduring images of Ben Stokes’s England career. In Test cricket he’s almost certainly leaning back, arms in the air at Headingley, roaring after he’s just cut away, cut away for four. In ODIs he’s probably decked out in baby/powder blue, arms aloft once again but this time with innocent eyes. Martin Guptill’s throw has deflected off Stokes’s bat for the six that no one saw coming. Not long afterwards, Stokes will have the World Cup trophy in his hands.

In the shortest form, however, the image is a painful one. It’s a night in Kolkata in 2016. Stokes is down on his haunches, eyes bloodshot, hands over his head, Joe Root crouched behind him, trying to comfort his old friend. Four balls have come and gone, each one of them sailing off Carlos Brathwaite’s bat for six. West Indies are World T20 champions and Eoin Morgan’s band of upstarts are still a while away from turning into the real deal.

Six and a half years later, Stokes is back for another shot at the trophy he was an over away from lifting. He missed last year’s T20 World Cup while taking a break from the game and since then his devotion has been entirely to the red ball; he hasn’t played a T20 since July 2021.

After putting on the ODI pyjamas this summer, he quickly called it a day, recognising the toll of trying to play everything in a world that increasingly demands sacrifice. He later opted out of the Hundred and the T20 internationals against South Africa, once more doing his bit for the purists as he focused on the Test revolution.

Stokes hasn’t become entirely allergic to the white ball. That retirement didn’t include Twenty20 cricket and despite his prolonged absence from the format his appearance in England’s squad for the World Cup in Australia never seemed in any real doubt, simply because of his standing in the game. But there is a tinge of awkwardness here, reasons to suggest why picking Stokes – and this may be blasphemous – comes with few guarantees.

Over the past year, his colleagues and opponents have been travelling from franchise to franchise, from one series to another, building up their prep in a game that mutates every week: there’s either another shot to play or new tricks bowling at the death. Stokes will come in from the cold in a warm-up series against Australia and be forced to switch on immediately in a format that gives little time to settle: a string of dots to get your eye in could prove costly. He’s got just a handful of matches to play catch-up before England’s opener against Afghanistan on 22 October.

While he’s been away, others have come in and looked the part. When Stokes slots in the XI, it’ll be at No 4 in place of Ben Duckett, not in England’s World Cup squad but their second-highest run-scorer in the series win over Pakistan. Liam Livingstone has made himself a regular during Stokes’s absence (but is in a fitness race of his own), and as the premier all-rounder Moeen Ali has been immense over the past 12 months. Then there’s been the grand arrival of Harry Brook.

The 20-over game is not Stokes’s strong point. Yes, that hulking frame promises sixes and one-handed screamers and it did deliver the MVP in the IPL back in 2017. But Stokes, forced to spend most of his time in T20s at No 5 and No 6, has never nailed it there. A cameo at the back-end just doesn’t feel right for a leading man – it’s like casting George Clooney to play the tech guy, not Danny Ocean. Stokes is at his best when he has a moment to weigh up all the variables – equations swirling around his head – before launching into his song and dance. His Headingley blitz on the final day came after initially grinding his way to three from 73 balls.

His expected move up the order will give him more of an opportunity to do something he’s never done in this format for England: hit a half-century. Even here, though, you wonder about some of the implications. If Brook is stationed at No 5, it could mean that one of Moeen or Livingstone is forced down to No 7, which seems a waste. If England opt against a fast-bowling all-rounder at seven – Sam Curran has been the main man in that role of late – that forces Stokes to pick up some of the grunt work with the ball. His numbers – an average of 38 – aren’t glittering.

Even after all of that, Stokes should probably still be there. His return makes more sense than it might have done a few months ago. Back then you had Eoin Morgan still running the show, Jason Roy ready to smack them up top and the all-conquering Jonny Bairstow primed to bat at No 4. A resignation, a painful decline in form and a freak golfing accident later, England have lost three World Cup winners. There’s room for stardust in this side and Stokes is in as the specialist superhero.

In a data-driven game he brings personality and vibes and that matters in moments like this. Australia’s approach to T20 looked messy and antiquated during last year’s Super 12 when they were pummelled in an eight-wicket loss to England; and yet they rode upon that old Australian tradition – to just go on and win the whole thing – by going on and winning the whole thing.

Stokes’s value may not come on a batting paradise, but on a sticky one, when brains begin to fry and someone just needs to stick it out in a chase of 140. If he does that, the image of Stokes the England T20 cricketer – the one from that night at Eden Gardens – can be replaced in the memory by something more joyful.