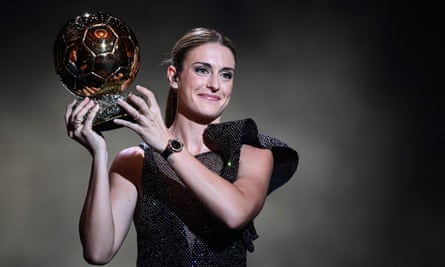 The images of Alexia Putellas clutching the Ballon d’Or trophy for the second successive year, becoming the first female player to do so since the introduction of the women’s award in 2018, were poignant.

Poignant first because Putellas was standing there with the ACL injury that crushed her Euro 2022 dream and will keep her out for much of this season. And poignant also because, although injury meant she was not a signatory of the statement from 15 Spain players that said the national team environment was affecting their emotional state and health, she is the talisman of the team, has expressed support for her teammates and was clutching the trophy for them as much as for herself.

“The only thing I’m going to say today about the national team is that it is a subject that makes me very sad,” she said after. “I think we have to talk about it, but also that today is not the day. Today is a day of celebration, historical for me.”

There is no doubt about her genius or extraordinary season. The Barcelona midfielder captained her side to a domestic treble, finished as the Champions League top scorer with 11 goals in 10 games and contributed 18 goals and 15 assists in the league.

Line up the best players in the world and, objectively, Putellas would likely be the first picked by any coach. Is she the best player on the planet? Probably. Did she have the best individual season? Arguably, by her standards, no.

The Ballon d’Or is not an award for the best player but the player deemed to have performed best over the previous season. If it were for the best player, it could be awarded to the same player every year until retirement. Is Megan Rapinoe objectively a better player than the best female footballer to play the game, Marta? No. Did she have a better and more influential 2019? Yes. This is how individual year-on-year awards work, or should.

Putellas had an incredible domestic year, is arguably the best player on the planet and could end up becoming one of the greatest women to play the game. But having suffered defeat in the Champions League final – scoring a consolation goal after Barcelona had conceded three times in 33 minutes to the eight-time winners Lyon – and having been cruelly ruled out of the European Championship days before the tournament, was it a season worthy of the biggest prize?

She beat England’s and Arsenal’s Beth Mead to the award she won by a landslide last year, but it is believed the voting was much tighter. Mead had a superb club season, ending with 14 goals and 19 assists from 40 appearances. At international level it was a clean sweep: she helped the Lionesses to secure a first European title, won the golden boot with six goals in six games and was named player of the tournament.

What more could she have done? Winning domestic honours with Arsenal would surely have made the difference, but Arsenal pushed Chelsea to the wire, losing the league by a point.

Some have questioned the quality of the Spanish league in criticism of Putellas’s win over Mead potentially being based on a lack domestic success, but that is unfair. Yes, La Liga is newly professional and Barcelona have not lost a league game since June 2021, but any suggestion that it is not as competitive as the WSL significantly underplays its quality.

Comparing the competitiveness of the two leagues is tough when there are so many variables to what makes a league competitive: style of play, financial investment, ideological investment, achievements in European competition – the list goes on.

In my mind, Mead edged Putellas for the various individual player of the year awards based on last season but Putellas is, broadly, the better player. Do I begrudge the award going to Putellas? No. Do I feel bad for Mead that, in possibly the best season of her career, it wasn’t enough? Yes.