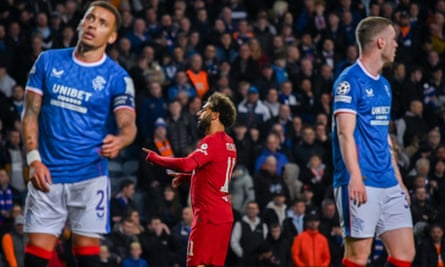 It does not take much to irritate Ange Postecoglou. Even in these times of domestic harmony at Celtic, the manager rails against the tiniest of perceived slights. One wonders about Postecoglou’s demeanour were the going genuinely tough.

Nonetheless, in respect of typical European analysis, Postecoglou has a point. He objects to Celtic being placed alongside other Scottish clubs when it comes to a dreadful Champions League, Europa League or Europa Conference League season thus far. Postecoglou is correct to highlight cliche. Celtic have been considerably more competitive than their compatriots.

For those with an overarching interest in the Scottish game – and how it sits in broader context – these have been miserable times. Celtic begin this Champions League week with a single point from four matches. Rangers’ record is the worst in the competition, owing to a record of four defeats out of four and a goal difference of minus 15. Hearts are averaging three goals conceded a game in the Conference League. Motherwell were bundled out of Europe by Sligo Rovers. Dundee United seemed giddy at beating Alkmaar 1-0 in a Conference League qualifier and duly lost by seven in the Netherlands.

Those in high office celebrated the potential for Scottish teams to feature in Europe in such significant number, but what followed looks embarrassing. An improved co-efficient rating, recently a source of pride, has triggered carnage.

The Old Firm have huge costs – Celtic’s was last reported at £90m – and supporter bases that leave many to believe they should be doing better. Under Steve Clarke, Scotland’s national team has found a way to punch at least equal to its weight. A scratch below the surface offers mitigating circumstance in the case of Celtic. Real Madrid were rocked for a half in Glasgow, with the width of the woodwork preventing Callum McGregor from handing the Scottish champions a lead they deserved.

But ‘coulda, woulda, shoulda’ counts for little at this level and in subsequent matches against Shakhtar Donestk and RB Leipzig Celtic’s wastefulness in front of goal denied them more than any sense they were out of their depth.

It is to Postecoglou’s credit that he appears to embrace the adversity. The manager wants Celtic to learn and benefit from playing in the Champions League, rather than throwing hands in the air and bemoaning an inability to joust with Europe’s best. The proof will be in that particular pudding but Postecoglou’s attitude is admirable.

Rangers’ scenario is entirely different. It is also curious, given the run to the Europa League final last season that showed Giovanni van Bronckhorst’s team cared little for reputation. Maulings by Liverpool, Ajax and Napoli have highlighted shortcomings, but they have been visible at home, too.

Van Bronckhorst already looks to be sliding towards an exit from Ibrox, with supporters unconvinced by a dull and currently ineffectual brand of football. Rangers are a club devoid of on- and off-field confidence and while the blame for that can not be solely placed at the door of the manager he will inevitably pay the price.

Unlike Postecoglou, Van Bronckhorst has bemoaned the chasm between his players and their Champions League opponents. Even subliminally, that message must resonate in the dressing room.

It is undeniable Celtic and Rangers are far too obsessed with the pursuit of each other. There is precious little wider thought. Celtic missed a glorious opportunity to establish themselves as a credible European force when Rangers were consigned to the nether regions of the Scottish league. Yet the balance of power within European football, which sits squarely with the major leagues, arguably means Scottish sides are for ever destined to take on also-ran status. Even at their modern-day best, Celtic and Rangers are Europa League clubs stuck in the vortex of chasing Champions League paydays.

The fates of Motherwell, Dundee United and Hearts mean fans of other Scottish outfits can hardly laugh at that. A blunt reality may be that Scottish teams are not particularly good.

Celtic will hope to add a more reasonable complexion to their Champions League campaign by beating Shakhtar on Tuesday. Rangers, meanwhile, fear another long night against a rampant Napoli on Wednesday. Hearts should only be the narrow favourites to defeat Latvian opposition on Thursday.

It is quite the grim collective picture. If not, however, one that depicts precise circumstance.