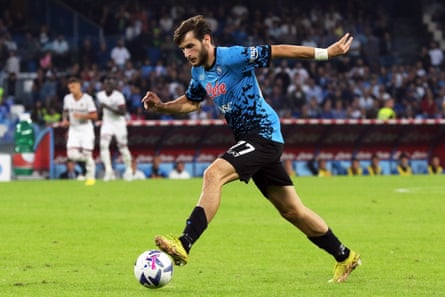 “Every match is a voyage into the unknown,” insisted Luciano Spalletti on Saturday, yet his team keep arriving at the same destination. Sometimes the path is bumpy, and sometimes it is smooth, but at the end Napoli always find the three points they were looking for.

This weekend brought a 10th consecutive win, extending a sequence that has carried them to first place in Serie A and their Champions League group. On paper, a home game against Bologna – who began the weekend one spot above the relegation zone – looked straightforward. In practice, it was the windiest road yet.

The visitors took the lead with a well-worked goal in the 41st minute, three players combining to set up 21-year-old Joshua Zirkzee for a goal on his first start. Their lead did not survive even to half-time, Juan Jesus equalising from a corner after Gary Medel made a mess of his clearance. If the source of the goal was surprising – Jesus was filling in at centre-back for the injured Amir Rrahmani and had scored three times in his previous 250 Serie A games – then the fact of it was not. Napoli had created chances throughout the first half, most originating from the feet of the irrepressible Khvicha Kvaratskhelia.

There was a seven-minute patch in which he conjured four separate scoring opportunities: sending Giacomo Raspadori, Mário Rui and then Matteo Politano through on goal, with a shot of his own in-between. Kvaratskhelia himself was the only one to demand a save from the goalkeeper, though Rui did hit the upright.

The man known locally as “Kvaradona” has piled up seven goals and six assists in all competitions, but even those numbers do not fully convey his impact: the consistency with which he finds space between the lines and the ease with which he distributes the ball off either foot. One Neapolitan reporter characterised him on Sunday as “the Van Gogh of the football pitches”, painting a fresh masterpiece each week.

He was instrumental in the goal that put Napoli 2-1 ahead right after the interval, chasing a pass down the left and beating two defenders before firing through a tight window across goal. Bologna’s Lukasz Skorupski could only parry and the ball ran to Hirving Lozano, who buried it at the back post. That ought to have ended this match as a contest, with Napoli dominating all phases of the game. Instead, they allowed Bologna to draw level again two minutes later, when Musa Barrow’s shot from 25 yards went straight through goalkeeper Alex Meret.

Even still, Napoli never truly seemed in danger. This was a cat with a mouse, toying with its prey, allowing only the illusion of hope. In the 69th minute Kvaratskhelia carved Bologna open again with a through-pass for Victor Osimhen, who nutmegged Skorupski .

If Kvaratskhelia was the stand-out performer, then the identity of his collaborator for this final goal felt just as significant. Osimhen only returned in midweek from a muscle injury that kept him out of action for a month. He had already come off the bench and scored in Napoli’s win over Ajax before repeating the trick here.

Not so long ago, Osimhen was considered the one indispensable figure in Napoli’s team. The club’s all-time record signing, he helped to fire them top of Serie A last season before a cheekbone fracture in their first defeat, against Inter in November, sidelined him for two months. By the time he returned, his teammates had lost three more times and slipped six points off the pace.

There have been no such struggles during his absence this time around. Summer signing Raspadori is a different mould of centre-forward, almost half a foot shorter and more comfortable roaming all over the pitch instead of occupying defenders as a target-man. A false nine, in other words, to Osimhen’s genuine article. Raspadori has started most games up front in the Nigerian’s absence, and did so against both Ajax and Bologna. Spalletti’s Napoli, just like his Roma side of the late 2000s, when he reinvented Francesco Totti as the frontman in a famous 4-6-0 formation, have thrived by denying opponents reference points, giving themselves the possibility to attack at any time, from any angle.

Thirteen different players have scored for them in 10 league games and you can add two more if you include their Champions League fixtures. Raspadori’s willingness to vacate space in the middle creates opportunities for Lozano, Politano or Kvaratskhelia to arrow in from the flanks, while Piotr Zielinski, André-Frank Zambo Anguissa or Stanislav Lobotka can take turns to maraud forward from midfield.

Does that same formula work with Osimhen in the line-up? Spalletti has insisted in various interviews that this is a question of horses for courses, suggesting that some matches require physicality up front where other defences are best unpicked with stealth and movement.

With characteristic confidence, the manager asserted at his pre-game press conference that balancing the ambitions of his attackers with the needs of the team was “easy”. Perhaps that was because he has seen the chemistry between them first-hand. Asked during a post-game interview with Dazn about the competition for places, Osimhen replied: “I adore Raspadori. I liked him when he was at Sassuolo, I’m not just saying it because we’re on the same team now. He’s a great player and a great guy. We have an excellent relationship and I’m happy for his progress. The important thing is to be united, there is a lot of solidarity in this team.”

Not everyone may be so patient. The midfielder Eljif Elmas, who contributed seven goals and six assists last season, but has just two starts so far in this campaign, caused a stir with an Instagram post last week of him stood beside the dugout with the caption: “My first love: the bench.” Yet the instinct within the club has not been to overreact to a player presenting personal frustrations in a light-hearted way.

It is, after all, the depth of this Napoli squad that makes it dangerous. Even when Osimhen was absent, if Spalletti wanted to give Raspadori a rest he could send on Giovanni Simeone, another summer arrival, who has scored four times in 277 minutes on the pitch. Jesus filled in ably for Rrahmani against Bologna, as did Tanguy Ndombélé for Anguissa in midfield.

What side in Serie A can boast a deeper range of options at so many positions? After Meret’s blunder – and he did almost concede again when flapping at a corner late on – we might also remind ourselves that Napoli have Salvatore Sirigu, capped 28 times for Italy, available as an alternative goalkeeper if one bad game were to evolve into a full-blown crisis of confidence.

“This is a wonderful group to coach,” said Spalletti at full-time. “The team plays good football and everyone still wants to get better. I see that interest in training, I see everyone involved.” He continued to sidestep premature talk about where this season could end up. Spalletti does not know the future any better than the rest of us. But he and his players are enjoying every winning voyage along the way.