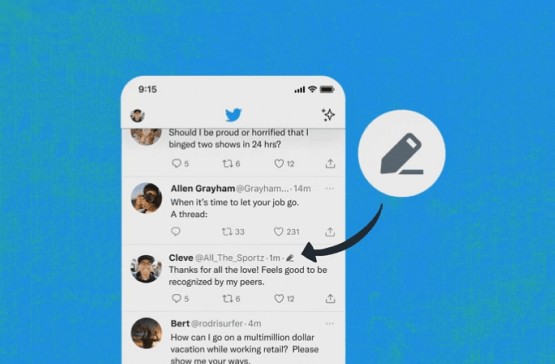 With tweet editing, the most requested social media feature of all-time, recently added to Twitter’s Twitter Blue subscription offering, you would expect there to have been a big jump in Blue subscribers over the last week or so, right?

Looking at the stats, it doesn’t seem like that’s the case.

According to the latest insights from Sensor Tower, Twitter hasn’t seen a major spike in revenue intake, at least based on the overall app ranking data.

As you can see in this chart, following the launch of tweet editing in Twitter Blue to users in Australia, Canada and New Zealand on October 4th, there was a bit of a jump, with Twitter rising up the app revenue ranks slightly in each region.

Twitter then released tweet editing to US-based Blue subscribers on October 6th, which also resulted in a ranking boost, based on Sensor Tower’s highest-grossing apps rankings.

The biggest increase, however, came on Sunday October 9th, where, as you can see, Twitter went up several ranking spots in the US, which does point to a fairly significant shift in users paying money in the app. But since then, it’s largely regressed to the mean once again, which could suggest that the initial interest in tweet editing hasn’t driven any major uptick in Twitter Blue adoption.

Twitter seemed fairly confident that it would, even raising the price of Twitter Blue back in July, seemingly in preparation for the arrival of tweet editing, which, again, given that it has been the most requested social platform update, arguably ever, should have driven more interest in its subscription offering.

And it could be a bigger driver than this data suggests – Sensor Tower’s insights here are based on comparative app rankings, in terms of revenue intake, so Twitter might actually have generated a lot of sign-ups, driving these overall ranking shifts, which will then continue to see it spike every month, as users renew.

But the early buzz does seem to have died down, and it’ll be interesting to see if users do see ongoing value in tweet editing – which gives you 30 minutes to revise your tweet, and five edits within that time period.

Or, alternatively, you could just delete the tweet and start again, as we’ve all done forever anyway.

In some ways, it feels like the hype around tweet editing has been overblown, due solely to Twitter’s reluctance to add it in. Like, there’s no real, major impact of adding an editing option – every other social media platform has offered edit tools for years, with no major issues or concerns. But Twitter’s resistance to providing such has made it a bigger deal than it probably is, just because it wasn’t there, and making minor typos in tweets is annoying.

Is it annoying enough, however, to pay for tweet editing? Probably not, because we’ve all adjusted by now, everyone already has a process for checking and deleting tweets as you go. Sure, it’d be handy to be able to fix up that error you catch in your tweet at a later stage (generally hours later, which would be outside the scope of the current tweet editing option anyway). But is it really that big a deal?

I suspect it’s probably not, and now that we have access to tweet editing, I suspect most people have already lost interest, as it’s really not the revolutionary update that years of debate and campaigning had built it up to be.

But maybe this assumption is incorrect – maybe millions more people are signing up for Twitter Blue as a result, bringing in a whole new revenue stream for the app.

The stats, again, don’t appear to reflect that, and I did ask Twitter for official numbers on take-up since the announcement, which it declined to provide.

There have also been some interesting uses of tweet editing by brands, which could spark new usage trends in the app.

But overall, it feels like the tweet editing hype was mostly just that, and in reality, most people don’t really have a lot of interest in the option – or at least, in paying for such.

It’ll be interesting to see, then, how Twitter Blue changes if/when Elon Musk eventually takes over at the app.

Musk has been fairly critical of Twitter Blue as a product, noting that it should be cheaper, should offer verification of some form within the package, ‘and no ads’ if users are willing to pay to use the app. One of Musk’s confidantes, investor Jason Calacanis, also described Twitter Blue as ‘an insane piece of shit’ in text exchanges with Musk, noting that:

“These dipshits spent a year on Twitter Blue to give people exactly… Nothing they want!”

Calacanis, it’s worth noting, has signed up for Twitter Blue since making these statements, and has praised tweet editing specifically.

Whether these perspectives still reflect Musk’s views or not remains to be seen, but Musk could look to make major changes to the Twitter Blue offering either way, while he’s also advocated for editing to be made more widely available in the app.

That could be a better approach, in making it available to all users – which Twitter says will happen at some stage either way – but really, what the initial response, suggests, in my opinion, is that tweet editing is not that big of a deal, and never was.

It just became one because of Twitter’s refusal to add it, but now that it’s here, it’s just another thing.