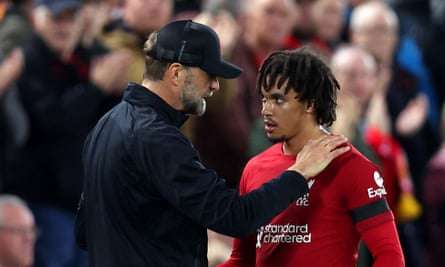 Football never stops. Brian Clough despaired of the exhausting churn, the sense you could never enjoy a win because there was always another game – and that was before European group stages, Covid-afflicted calendars and winter World Cups. And it never stops changing: there are always new ideas or ways to thwart the old ideas. Standing still, as Peter Reid observed, is moving backwards.

That’s why the Hungarian double European Cup-winner Béla Guttmann spoke of the third year as being fatal for a coach. Your players get used to you, so your words lose their impact and minor irritations can become major frustrations. Other teams get used to you and work out strategies to counter you. Familiarity is stagnation is failure. That’s why the best managers, or at least those who aspire to build a dynasty, exist in a state of permanent evolution.

Saturdaymarked the seventh anniversary of Jürgen Klopp’s appointment as manager of Liverpool. It is testament to his abilities and charisma that he has thrived far beyond Guttmann’s limit. He is the longest-serving manager in the Premier League by 266 days; the fourth-longest serving in the league as a whole; and only Bill Shankly, Tom Watson and Bob Paisley have taken charge of more Liverpool matches.

But with Liverpool’s form uncertain, going into the weekend 11 points behind the league leaders, Arsenal, who they face on Sunday, it feels significant that he spent seven seasons at Mainz, then seven at Borussia Dortmund.

There are clear differences between the clubs: football has a habit of defying easy explanation, tempting as the notion of a seven-year itch may be. Mainz were operating on a limited budget, were relegated from the Bundesliga in Klopp’s sixth season and he resigned having failed to lead them to promotion in the seventh. At Dortmund, the seventh season began so poorly they went into the winter break second bottom of the Bundesliga before recovering to seventh.

At Liverpool, the disappointing season was the sixth (counting 2015-16 as his first, even if it was eight games old when he took over). The seventh was almost exceptional, with the quadruple seeming possible until the final weekend of the season. Perhaps to come so close and end up with only a pair of domestic cups was always going to provoke a negative reaction.

But it is the 2020-21 campaign that in part explains what is happening. Then, as now, Liverpool’s press lost its precision and its intensity. The question is why. This season, like that sixth season, featured a shortened close season and a compressed calendar, the fixtures coming weekend, midweek, weekend, midweek, without a break. That is physically and mentally demanding, and Liverpool have been unable to overwhelm sides as they did at their peak.

The remorseless schedule also means that if the internal mechanisms of a team go wrong, there is very little time to put them right. And that really has been the problem this season. For all the (largely justified) talk of Trent Alexander-Arnold and Virgil van Dijk being in poor form, at least part of the reason has been that they have been exposed by the failure of the Liverpool press, something Klopp acknowledged after last Saturday’s 3-3 draw against Brighton (when the rot continued despite the presence of the putative first-choice trio of Fabinho, Jordan Henderson and Thiago Alcântara in midfield).

“We concede now similar goals … where they go through the same gaps,” Klopp said. “We have a really brave way of defending and when the timing in our defending is not perfect, then we leave a gap open.”

The 3-1 defeat away by Real Madrid in April 2021 is perhaps the best example of that, the first two Madrid goals coming as Toni Kroos, given time by a malfunctioning press, measured passes into the space behind Alexander-Arnold.

Which is where Klopp’s longevity, the sense of familiarity, becomes an issue. There have been tweaks here and there, the occasional dabble with a back three or a double pivot, but fundamentally, since 2016, the Liverpool default has been 4-3-3.

That’s why Carlo Ancelotti said after the Champions League final he had found Liverpool “easier to decipher” than other teams Real Madrid beat on their way to European success. “They have a very clear identity,” he said. “We knew what strategy to take – don’t give them space behind the defence to run into.”

Which is not to say Klopp has failed to evolved: he has and one of the great fascinations of the past decade has been the tactical contest between him and Pep Guardiola, each adapting and amending to the advances of the other. But this is the crucial stage of that development, as Klopp unpicks one great team and begins to knit another.

The most radical impact of that process has come in the forward line as the arrival of Luis Díaz, by pushing the now-departed Sadio Mané into the centre, changed the role of Mohammed Salah even before Darwin Núñez’s arrival. Salah playing wider has not merely reduced his impact in the box, but changed Alexander-Arnold’s responsibilities, causing him to come inside more, perhaps increasing his susceptibility to balls played behind him.

Other adjustments necessarily follow. On Tuesday, against Rangers, Henderson and Thiago operated as a double pivot with Diogo Jota playing off Núñez. Alexander-Arnold played far deeper than usual, a useful precaution against Rangers’ attacking left side of Ryan Kent and Borna Barisic.

Given the form Gabriel Martinelli is in, and the way he tormented Emerson Royal against Tottenham last week, there may be a similar role for Alexander-Arnold against Arsenal on Sunday, while Jota as a deep-lying central forward might help unsettle the Thomas Partey-Granit Xhaka axis that has been so effective this season.

Perhaps this new development is the future, perhaps these are short-term measures, but as the evolutionary tide keeps turning, for the first time in a long time there are questions about how Klopp can harness its power.