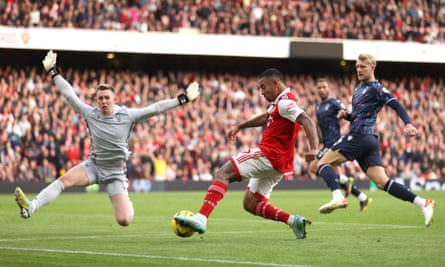 Five-nil. But then, Manchester City just look so strong at the moment. Still: five- nil. But that injury to Bukayo Saka, how much of a blow could that be? Anyway, it was five-nil. But those Nottingham Forest chances, the Jesse Lingard shot where Gabriel Magalhães basically passes it straight to him, one day those are going to cost you. And yet, check the scoreboard, girls and boys: five-nil.

It is the eternal gift of Arsenal fans to be able to identify the potential anxiety in virtually any situation, however favourable or triumphant. Pleasure is simply misery deferred. Most people look for crumbs of comfort; Arsenal fans look for crumbs of concern, scan the fixture list for oncoming hazards, scan every horizon for grey clouds. And so, even a routine and rampant 5-0 victory comes with its own quantum of unease.

The first sign came when Gabriel Jesus ran through on goal with 67 minutes on the clock, beating Joe Worrall to the ball and finding himself alone with only Dean Henderson for company. Almost instinctively one could feel the swell of longing swirl around the Emirates: come on, he’s worked so hard, just let him do a goal. Instead Jesus took a heavy touch, the ball ran wide and a weak shot was eventually saved.

This was Jesus’s seventh game without scoring, a statement that, while true, also completely mugs him off. Jesus was arguably the best player on the pitch. He assisted two goals, created a third for Reiss Nelson, had seven shots on goal and more touches than any Forest player. Arsenal are an immeasurably better and more coherent team when he is present. And so even to invoke the issue of goalscoring here is to risk lapsing into radio phone-in territory, to problematise a player who could scarcely be less of a problem.

But there is a genuinely interesting aspect to this debate, which is whether there is a way of measuring and assessing the contributions of elite forwards beyond the most simple and lumpen metric of them all. Jesus has started his Arsenal career with five goals from 15 games and the only remarkable thing about that is how in keeping it is with the rest of his career. A goal just under every three games is roughly what Jesus averages wherever he goes, whether at Palmeiras (16 goals in 47 league games) or Manchester City (58 in 159) or Brazil (19 in 56). There is not – with the best will in the world – a Haaland or Kane-level goal monster in there. This is just what you get.

Of course, as anyone who has seen Jesus play will be able to tell you, this is not all you get. One of the reasons it feels unfair judging Jesus by the output of a conventional striker is that his input is not that of a conventional striker. Of his 72 touches, only 16 came in the Forest penalty area. Thirteen were in his own half. The vast majority, in fact, were on the left wing, with another little cluster around the left edge of the centre circle. He attempted more tackles than any other Arsenal player. Jesus is, in effect, a ball-winning wide midfielder who does striking for a little extra cash.

Or observe the first Arsenal goal, an elementary Saka cross turned in by Gabriel Martinelli with a poacher’s instinct at the near post. Jesus, meanwhile, was still marooned out on the left touchline, creating space for Takehiro Tomiyasu. Even as the ball was worked back into the centre Jesus did not remotely bust a gut trying to get into the area. Is this selflessness or simply gutlessness? Call now to have your say.

Jesus learned his football on the dirt pitches of São Paulo, among boys of wildly differing sizes, where the surface was pocked by ridges and craters. Predicting where the ball was going to go was for fools. What mattered above all was reacting: who could adapt fastest to the uneven bounce, who had the speed to reach the loose ball, who had the strength and agility and cunning to shield it from rivals. And you still see that in Jesus’s game, the short backlift and quick flicks and little collisions: a player who on some level still does not quite trust what the ball is going to do, who never quite grasped the striker’s art of seeing four moves ahead because he was raised in a world where only the next one mattered.

So the modern Jesus presents us with something of a paradox: a player so good that he should probably be a superstar and yet whose game is essentially antithetical to the whole superstar concept. (Ángel Di María also springs to mind in this respect.) No wonder it took years for people to work out exactly what he was doing out there: grafting and chasing, finding the gaps and finding them quickest, quietly making the players around him look a little better. Is he the perfect striker? No. But he may just be the perfect man for this Arsenal team right now.