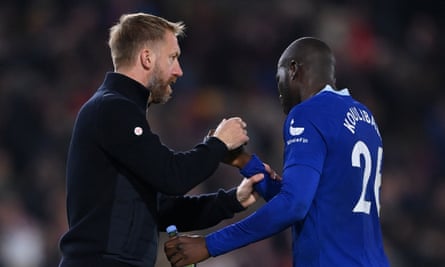 Graham Potter hasn’t waved a magic wand. He hasn’t revived Chelsea with revolutionary training sessions or era-defining tactics. Instead, Potter has done something simple and sensible: he has been himself.

This is a man who understands people, knows how to communicate and values emotional intelligence. Potter had never managed in the Champions League before replacing Thomas Tuchel as Chelsea’s head coach last month, but he was not fazed by the challenge of inheriting a dressing room packed with stars such as Raheem Sterling and Pierre-Emerick Aubameyang. Nor did he think about the pressure that comes with working for Chelsea. In Potter’s world there is nothing to be gained from needless drama. The 47-year-old does not like to make a lot of noise and, for all the attention on his Glow Up (translation: expensive hair cut, cool beard, fashionable jackets), it is his level-headed approach that has helped him settle in quickly at Stamford Bridge.

Of course, there have been questions over whether the mild-mannered former manager of Östersund, Swansea and Brighton is glamorous enough for Todd Boehly and Clearlake Capital. Yet the message comes that Chelsea’s ownership should not be judged on firing Tuchel with such haste. The aim is to build a collaborative culture, with firm links between the coaching staff, a revamped recruitment department and the board, and hiring Potter has made people view Chelsea in a different light.

This was an elite club thinking outside the box. Chelsea, who have risen to fourth before hosting Manchester United on Saturday, looked at Potter’s work with Brighton and decided that he was ready. His start – five wins and two draws from his first seven games, including thumping victories over Milan in the Champions League – suggests that they made a wise choice.

The early impressions are positive. A heavy schedule has denied Potter time on the training ground, but the players are enjoying his sessions. A lot is made of his humility and decency. When it comes to connecting with Aubameyang, who clashed with Mikel Arteta at Arsenal, he has seen the striker for what he is: a human being.

Such calmness has transmitted itself to Chelsea’s players during games; it was evident when they kept their heads during their bad-tempered win over Milan at San Siro. Unlike Tuchel, Potter is not a demonstrative presence on the touchline, creating an environment in which players do not have to worry about being criticised for mistakes.

Chelsea looked miserable when Tuchel’s final game ended in a shock defeat by Dinamo Zagreb. The German’s relationship with the board had deteriorated and several players were unhappy. But Potter and his backroom staff have energised the place. Behind the scenes, there is admiration for Potter’s recruitment chief, Kyle Macaulay. On the pitch, the team have shown signs of adapting to the subtle variations associated with Potterball.

Some players have clearly been given a boost from Potter’s coaching. If the manager prefers to talk up his goalkeeping coach Ben Roberts whenever the subject turns to Kepa Arrizabalaga’s revival, he can take credit for Mason Mount’s outstanding form. Mount has benefited from being given more of a central role and Ruben Loftus-Cheek, who has struggled for consistency since a serious achilles injury in 2019, has been excellent during his outings in central midfield. Kalidou Koulibaly and Trevoh Chalobah have impressed in defence. Aubameyang is scoring.

Potter has used his squad. He has not been afraid to rotate, to flit between a back three and four, and has adapted tactics depending on the opposition. Much was made, for instance, of Sterling playing as an attacking left wing-back when Potter opened with a 1-1 home draw against RB Salzburg. Would Sterling take being moved out of the front three?

Yet Potter had noted that Salzburg play a narrow 4-2-2-2. The space was on the flanks and he wanted to get Sterling into one-on-one situations. Sure enough, the England forward scored Chelsea’s goal.

Admittedly some plans don’t work. The experiment of Sterling at right wing-back during last week’s win over Aston Villa was not a success. Marc Cucurella also had a tough game at left centre-back and Potter was quick to make changes.

That decisiveness has made the players respect him more. Potter does not get emotional if a game becomes difficult. He reacts and sorts out the problem. It is how he worked at Brighton. The big difference is that he is working with world-class players now, though he has not hesitated to give proper opportunities to Chelsea’s talented youngsters. Armando Broja and Conor Gallagher have featured and it was encouraging to see Potter introduce the 18-year-old midfielder Carney Chukwuemeka with 28 minutes left against Brentford on Wednesday.

It is about stripping away the fear factor. Potter has given his players freedom to express themselves and is not getting carried away. On the one hand Chelsea are seven points off the top, have kept five consecutive clean sheets and will qualify for the last-16 of the Champions League if they beat Salzburg on Tuesday. Equally they could have lost to Brentford and were fortunate not to concede against Villa. Reece James, Wesley Fofana and N’Golo Kanté are long-term absentees and concerns remain over the consistency and incisiveness of Chelsea’s attack.

The mood can turn quickly at Chelsea. A run of defeats would invite pressure on a scale Potter has never experienced; upcoming games against United, Brighton, Arsenal and Newcastle could alter the outlook.

Yet Potter, who is not an insecure person, will take it all in his stride. He is skilled at dealing with people and he is a tactical expert. Chelsea will hope that continues to prove a winning combination.