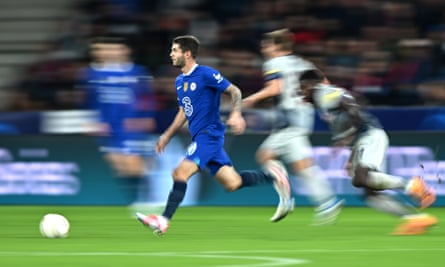 Callum Hudson-Odoi never really enjoyed playing as a right wing-back. He tried his best when Thomas Tuchel put him there after becoming Chelsea’s head coach in January 2021 but the role never felt a natural fit. “At times, it was OK,” Hudson-Odoi said in an interview with the Athletic this week. “But sometimes in my head I’m thinking: ‘What am I doing, why am I in this position? I’m more defending than attacking.’”

All that running towards his own goal took a toll on Hudson-Odoi, cramping the winger’s style, and the result was his departure from Chelsea in August. A loan to Bayer Leverkusen represented a fresh start for the 21-year-old, who is relishing the chance to show what he can do as a conventional winger.

The thought occurs, though, that Hudson-Odoi might have been better off waiting. The dynamic at Chelsea changed after he joined Leverkusen. Out went Tuchel and in came Graham Potter, who has wasted no time introducing Chelsea to an intriguing, slightly wild tactical concept: the wing-back as auxiliary winger, a nominally defensive position used as a mode of attack, trust occasionally placed in the back three to fend for themselves.

What is this madness? A cursory glance at Chelsea’s team sheet when they beat RB Salzburg on Tuesday might have suggested that not much has changed since Tuchel’s sacking. The system looked familiar: three centre-backs, two wing-backs and, in Pierre-Emerick Aubameyang, a striker failing to convert some easy chances.

With Potter, though, part of the fun is trying to work out where the players are going to be when the starting XI is announced. In reality the former Brighton manager’s system against Salzburg had Jorginho screening the defence, Mateo Kovacic and Conor Gallagher driving forward from central midfield, Kai Havertz accompanying Aubameyang up front and, most fascinatingly, Raheem Sterling and Christian Pulisic as the wing-backs.

It was a risky ploy from Potter, who could have more surprises in store when he returns to Brighton on Saturday, and it is hard not to wonder whether it is sustainable, if only because it is doubtful this is what Sterling had in mind when he joined Chelsea from Manchester City.

At first glance, the player who was supposed to be Chelsea’s main attacker finds himself doing a job for the team. Sterling has played at wing-back in four of Potter’s first nine games and is goalless in his past eight appearances. He is the new Hudson-Odoi. A loan to Union Berlin beckons next summer.

Only, it is not quite that simple. Neither Sterling nor Pulisic was under instruction to do much defending against Salzburg. They pushed high, drifted inside and swapped flanks a lot. At one point Sterling moved in from the left to start a flowing one-touch passing move. Later he was dropping deep to play a glorious ball through to Havertz.

Sterling was bright. As for Pulisic, he was full of dynamism on the right. The American is enjoying a good spell and was impressive against Salzburg, drawing defenders to him with clever dribbling and playing the pass for Havertz’s winner.

It was good to watch. After going through a creative dip in recent weeks, Chelsea were flexible and inventive against Salzburg. Potter is not wedded to one approach. He adjusts according to the opponent and knew that width was the best way of exploiting Salzburg’s narrow formation.

It was made for Pulisic and Sterling, who had also started at left wing-back when Potter faced Salzburg in his first game. The trick is not to see it as attacking players being shackled. After all Leandro Trossard and Solly March flourished as wing-backs for Potter’s Brighton.

That said, the plan comes with defensive risks. Take Salzburg’s equaliser on Tuesday. Chelsea were exposed when Thiago Silva stepped out from the back and lost a tackle. Maximilian Wöber surged away from Pulisic and Marc Cucurella was faced with an overload when the full-back’s cross reached the far post. Sterling had not provided Chelsea’s left centre-back with any cover, which allowed Junior Adamu to score.

At that stage the mind went back to Brentford’s manager, Thomas Frank, speaking about the intricacies of Sterling’s role during his side’s recent goalless draw with Chelsea. Potter’s initial approach was conservative, with Cucurella starting at left wing-back, and he waited until the hour before turning to Pulisic and Sterling. The change altered the dynamic. On the one hand Sterling was dangerous after coming on; as Frank pointed out, though, the England international’s unique interpretation of the wing-back role allowed Brentford’s Mads Roerslev to make repeated unchecked raids down Chelsea’s left.

Sterling had also toiled at right wing-back during Chelsea’s 2-0 win over Aston Villa. That experiment was quickly shelved, Ruben Loftus-Cheek moving to the right, and it is unlikely that Potter will be quite as open against Brighton, or when Arsenal visit Stamford Bridge next Sunday.

Chelsea have conceded only four goals under Potter and a good guide is that they opted for more balance against tougher opponents. Cucurella and Ben Chilwell have alternated on the left and Reece James is an automatic pick on the right when fit.

However Potter has had to improvise since losing James to a knee injury. James is more than a defender; he has been Chelsea’s most effective attacker this season and replacing him is not easy. César Azpilicueta is not suited to charging up and down the right and Loftus-Cheek prefers central midfield, so Potter needs ways to mix things up.

Perhaps he would have used Hudson-Odoi. Being a wing-back for Potter does not require sacrifice. It is an attacking tool for Chelsea, a way to make them less predictable. They still suffer from inconsistency in the final third and can get bogged down against stubborn opponents, and in that context there is method to the madness. Sterling and Pulisic are playing in unusual roles. They may not know the first thing about defending. But they are also giving Chelsea way more variety. It looks like a lot of fun when it clicks.