Instagram continues to push ahead with its plans for a new in-app Media Kit creation option for talent, which would guide creators through the process of building their own pitch to brands, with a view to securing more influencer marketing deals.

Originally spotted in testing last month, Instagram has now seemingly moved to the next stage of development for the option, with a new welcome screen, and an overview of how the process will work.

As you can see in this screenshot, posted by app researcher Alessandro Paluzzi, Instagram has now added a new intro flash screen for its Media Kit, which it’s now calling ‘Creator Portfolio’ instead.

As Instagram notes, the benefit of the Creator Portfolio, over a Creator Marketplace listing, is that it would then enable creators to share their profile direct with potential partners in-app. 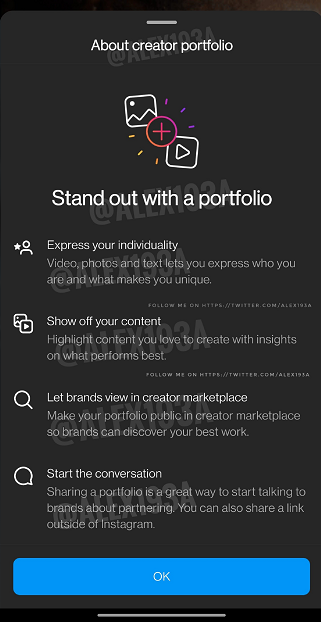 Instagram has already confirmed that it’s experimenting with the option, though it remains an internal prototype at this stage.

It’s interesting to see how Instagram’s working to boost its appeal to creative talent, as it seeks to keep them posting to its app, instead of floating off to TikT0k or YouTube instead.

That effort is likely now seeing even greater emphasis, with Instagram CEO Adam Mosseri recently informing his team that the app is falling behind in various key measurables related to the creator push.

As per The Information:

“In [an internal] memo, Mosseri said that surveys of creators showed that Instagram “lag[s] behind TikTok and YouTube on all the dimensions that are most important to creator satisfaction,” including several unrelated to the ability to make money, such as “fun, reach, fair algorithm and care.” Mosseri also said the team is “behind where we need to be” on initiatives to help creators make money on the platform but is “upping our urgency and progress.”

Part of Instagram’s big push to get creators more exposure in the app – pumping more AI-recommended posts from profiles that users don’t follow into their feeds – has also proven largely unpopular, with Instagram now quickly losing ground, in terms of time spent, to TikTok and YouTube. 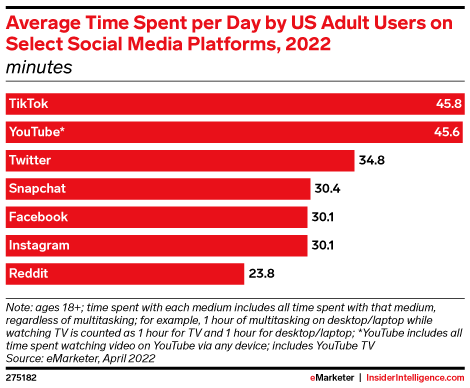 So its creator push isn’t exactly going to plan – but maybe, IG still has a few tricks up its sleeve to help improve its creator appeal, and get more talent sharing their latest content to the app, as opposed to building their presence on those other video platforms.

But it’s got its work cut out for it. YouTube recently announced that, over the past three years, it’s paid out more than $50 billion to creators, artists and media companies via the YouTube Partner Program for monetization, while TikTok is clearly the app of the moment, and has largely stolen IGs thunder, amid its various stumbles and missteps as it’s struggled to keep up.

Copying Stories worked, and negated Snapchat almost entirely, slowing its growth to a crawl for some time. Copying TikTok has not proven as effective, likely because it’s involved a wholesale revamp of the app.

People seemingly don’t want another, lesser version of TikTok, and the more that IG contorts itself to try and be more like TikTok, in line with trends, the more it loses any semblance of individual appeal, which, seemingly, is lessening its relevance overall.

Maybe, through some exclusive creator deals, it can still get things back on track. But it does also feel like a reckoning is coming for the ‘Creator Economy’, where the truth – that 99% of creators will never make any significant money – is going to derail the entire push.