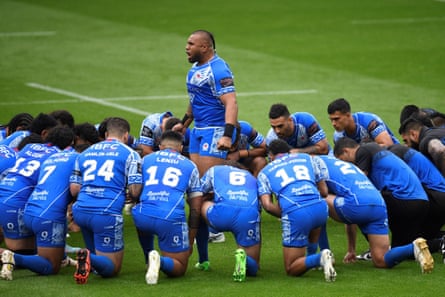 Everyone loves seeing a bully put on their backside. Crowds adore the mouse that roars or a minnow that swallows a whale. International sport is built on such David v Goliath dramas. It’s the victory of heart over head, the triumph of the fight in the dog, not the dog in the fight – a reminder that the favourite is a misnomer and it’s the dark horse we’re often drawn to.

Hence why the handful of upsets in the 2021 Rugby League World Cup so far have been more satisfying than the shellackings and spiflications that are usually the norm at this event. It’s the same reason Trevor Immelman, Rulon Gardner, James Douglas, Anna Keisenhofer, Karne Hesketh and Frank Borghi are names etched deep in the memory of sports fans.*

The first upset was when England demolished Samoa 60-6 in the opening game of the tournament. On paper, a team drawn from 56 million vanquishing one of 200,000 citizens is not shocking. Nor is it surprising when you recall Samoa have won just two Tests since 2016 (against the Cook Islands and Papua New Guinea) and went through the last World Cup winless from their four matches. Luckily their $30 per diem meant they didn’t go home empty-handed.

But this Samoan side featured six Penrith NRL premiership winners (NSW stars Brian To’o, Stephen Crichton and Jarome Luai among them), two players from the runner-up Parramatta side, three ex-Origin forwards in Junior Paulo, Jaydn Su’A and Josh Papali’i and teen star Joseph Sua’ali’i. So star-studded were Samoa, many had them as the dark horse to win the World Cup. No wonder England coach Shaun Wane claimed his side were “underdogs”.

Ultimately Samoa were humiliated by the home side, leaking six tries in the final 16 minutes. In round two, Ireland and Wales were then upset by Lebanon and Tonga, both teams bolstered by NRL recruits and Lebanon’s Cedars by coach Michael Cheika, ex-Wallabies mentor, lifelong league fan and proud son of Lebanese migrants. This week the Cook Islands have a real sniff against Tonga and France can make life very difficult for Samoa.

It continued a proud tradition of World Cup upsets that must continue for the game to thrive. In 2008, Ireland knocked out Samoa. In 2013, the USA beat Wales, and Scotland shocked Tonga. In 2017, New Zealand were gazumped by Tonga, then Fiji. Indeed, Australia’s last international before this World Cup was a shock 16-12 loss to Tonga in Auckland in 2019.

A key factor in this levelling up is players from Tier One nations (Australia, New Zealand, England) forsaking the jerseys of their homeland (and the payment fees that go with it) in homage to the heritage of forebears by representing Tier Two and Three nations. The end result is more upsets, less blowouts, stronger competition with tighter scorelines, and an elite talent pool spread further around the globe.

NRL players have sensed this opportunity and stepped up – or, for heartfelt reasons, back. Lebanon, Greece, Papua New Guinea and the Cook Islands all feature upwards of five NRL players in their squads. Only Jamaica, Wales and France will not field NRL stars at this World Cup (although the latter is mentored by Sydney Roosters coach Trent Robinson). In total, 155 NRL players will turn out for 13 of the 16 squads.

This rising tide of new loyalties lifts all boats. Players qualify to represent a nation by virtue of a) birthplace, b) residency for a period of five years, and c) “where the player has a parent or grandparent whose heritage permits them to play for a country other than where they were born or are resident”. Defections also freed Mal Meninga to pick 13 uncapped players in Australia’s 24-man squad.

Players love World Cups, as they do the annual All Stars-Māori game because it allows them to honour their roots while keeping feet in a few camps. Many NRL stars take on ‘elder’ status in less-experienced squads. There’s personal growth and a deepening of cultural connections, a small price to pay for the occasional walloping at the hands of their club teammates.

Josh Papali’i was born in New Zealand, has eight caps for Australia but this year is debuting for Samoa. Even Australia’s captain, fullback James Tedesco, was raised in Menangle in Sydney’s south-west but represented Italy, his father’s birthplace, in the last two World Cups.

Such transient loyalty to his father’s motherland is unlikely to cloud Tedesco’s thinking when his Kangaroos put Italy to the sword on Sunday morning. They have already dispatched Fiji 42-8 (despite the Fijians threatening a boilover by scoring the first try of the game) and last week they routed Scotland 84-0, the biggest scoreline margin of the tournament so far.

Italy have a harsh lesson awaiting them, but it’s a valuable one. Without elite professionals plying their trade on the same field as amateurs from lower tiers, the game cannot grow. After years of ugly but necessary mismatches, cricket is bearing this fruit at its T20 World Cup, with former minnows Ireland this month eliminating West Indies and defeating England.

With women’s and wheelchair competitions running in tandem, this World Cup is, says chief Jon Dutton, “the biggest tournament in the sport’s 127-year history” and “international rugby league’s moment to shine”. Can its best players, across an expanded pool of 16 nations, stand with football and rugby union as a ‘world game’? It’s a dark horse worth watching.

* World No 1,673 Immelman beat Tiger Woods to claim the 2007 Masters; ‘nobody’ wrestler Gardner defeated nine-time world champion Alex Karelin at the 2000 Olympics; Douglas KO’d 37-0 heavyweight champ Mike Tyson in 1990; 500-1 amateur cyclist Keisenhofer took gold in the road race at the 2020 Tokyo Games; Hesketh scored the try for Japan to shock South Africa at the 2015 Rugby World Cup; and Borghi was the hearse driver from Missouri who made several key saves as the USA beat England at the 1950 World Cup.