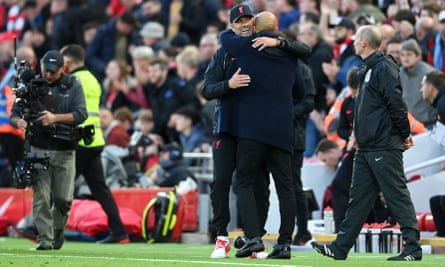 Even Jürgen Klopp seemed a little mannered and grave in his pre-match press conference, unwilling to offer up barbs or jokes or amusingly exuberant swear words. There was some headline-grabbing stuff about the limits of being able to compete long-term with clubs owned by nation states, remarks that, while undeniably true and worthy of debate, will still rile the more biddable foot soldiers of the Etihad public relations department.

Mainly Klopp sat at his desk talking without hyperbole about Manchester City as the best team in the world and Erling Haaland as the best striker in the world. Nobody disagreed (they shouldn’t: they are; he is) or really made much of it. But then, as Liverpool welcome City to Anfield on Sunday afternoon, eight games into a Premier League season of entropy and metal fatigue, it is hard to avoid the sense of a pistol hammer being cocked.

Liverpool haven’t won a league game since August. Liverpool had conceded 10 goals in five games before Wednesday night’s stroll through a Rangers backline that showed all the resistance of a beaded curtain.

If Klopp’s team look tired, well, maybe that’s because they are. At the Emirates last weekend Liverpool had eight men on the pitch who also played in the opening game of Champions League run four years and one global pandemic ago. Even the most resilient material has a limit to its tensile strength.

By contrast City have yet to lose this season and have looked like an entity in a state of transformation, all new shapes and new forms, new energy. City have 44 goals in 14 games, 31 of those scored by 22-year-olds. Even Pep Guardiola has begun to dress a little younger, to wear trousers with too many pockets, a man who is suddenly able to marvel a little at the thing he has made, even, for the first time, simply to watch it go.

Little wonder there is a temptation to give in to the idea of the seven-year itch, the ageing parts, the failure to renew, those meme-able shots of Klopp staring weirdly on the touchline like an ailing robot mannequin considering the meaning of mortality; and from there to cast Sunday as a gallows walk, a requiem for an era.

This fatalism might even be Liverpool’s best hope of defying gravity. This is still a game of fine details. There may be an obvious mismatch in the prospect of Nat Phillips (one hour in the Premier League in the past 18 months) being asked to contain the world’s most insatiable Nordic goal-raptor. But last seasons’s quadruple chasers aren’t quite done just yet.

Perhaps, for the neutral at least, there is a better way of looking at this. Sunday is also a moment to pick over the wider narrative of the past four years, to register just how vertiginously good City have been in that time and appreciate Liverpool’s ability to keep pace, the will to push league seasons to the wire.

This is a Liverpool team that have won by making their opponents suffer, but which now find this a quality that cuts both ways, running themselves thin chasing the sun. While there is a reflex urge to find fault with a team in decline, to cast around for avoidable errors – which are undoubtedly present – there is an argument that Sunday is also a moment to celebrate, a Viking funeral for the age of high Klopp-ism.

There have been missteps along the way. Why no new midfielder this summer? Why no plan B, no sense of this team evolving or finding different patterns? This Liverpool have the same strengths and weaknesses as all the Liverpools of the last five years.

The most telling weak point is the reliance on a core of undroppable players. Virgil van Dijk and Trent Alexander-Arnold are never rested, never given time in the shadows to take a breath. Mo Salah has played 233 games in the last four and bit seasons, more than Kevin De Bruyne, Riyad Mahrez and Phil Foden.

This is a source of strength. The relationship with these undroppables has been unusually tight, intimate, galvanising. But in the case of Alexander-Arnold the insistence on backing him through his drop in form, on insisting that, in fact, this was all part of the plan, has felt a little misguided, not to mention unfair on the player himself. João Cancelo is also a top-class attacking full-back. But does anyone actually notice if he’s rested or rotated out or given time to recover if his levels drop?

The same goes for Van Dijk, a player so excessively revered that to drop him from the team would feel like dynamiting one of the presidential heads off Mount Rushmore, to invite notions of collapse and decay. Van Dijk achieved the rare late-blooming feat of becoming one of the best centre-backs in the world for three seasons. But after that terrible injury, he has been forced to search for his best form in the full glare of public scrutiny.

It is a function of the greater quality of City’s squad that Rúben Dias or John Stones can disappear for a game or two without comment, that De Bruyne can be rested when his body starts to trouble him. Money does come into this. Liverpool’s net transfer fee spend in the last four years has been £80m, compared with City’s £200m.

It isn’t just about the figures. City have also spent brilliantly, a club that operates at every level with an un-football-like degree of extreme competence. There is something else, too, a level of comfort. No nation-state club will ever go bust or over-stretch itself, will ever have to worry about resale value or dividends for owners or moneyball stuff.

It is a level of financial invincibility that makes a difference to every hard choice. City fans will point out, correctly, that other elite clubs have spent as much. But the fact is they’re doing this to keep up with City and Paris Saint-Germain, not because it makes any actual sense. Consider, for a moment the doom-laden transfer dealings of Barcelona or Manchester United. Does anyone really think this is good for them?

If there is cause for optimism on Sunday it is that Liverpool aren’t as bad as they look. Salah is not a five-league-goals-in-eight-months player. Andy Robertson is back. Van Dijk may not be great again, but he could at least be good.

Plus Liverpool haven’t actually lost at home in the league for a year and half. There is still hope of cranking that wheel again, of generating those surges of energy that once made Guardiola refer to Anfield as “that place”, that left him stomping his feet, waving his fists at the sky and shouting “two times, two times”. But really, how many more times?