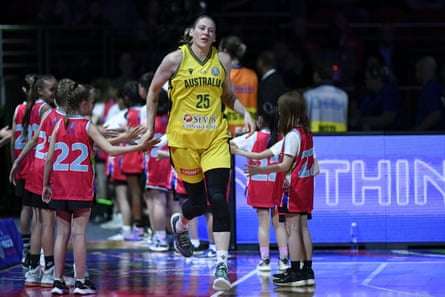 Two weeks ago, Australia’s Lauren Jackson – perhaps the greatest female basketball player of all time – told me she did not believe in fairytales. No matter. On Saturday, Jackson farewelled her remarkable career in true fairytale fashion. It would be hard to script a more appropriate ending. On home soil, the Opals beat Canada to win the bronze medal – or “rose gold,” as Australian fans like to say – at the Fiba Women’s World Cup. Jackson reprised her form of old, leading the scoring with 30 points, to add a fourth World Cup medal to her tally (alongside four Olympic medals).

It was a comeback no one anticipated. Jackson, 41, who made her national team debut a quarter of a century ago, had retired from basketball in 2016 due to injury. A farewell at the Rio Olympics was dashed as her efforts at rehabilitation floundered. The giant forward was never given the opportunity to go out on a high. Until now.

Jackson retired to her hometown of Albury. She had two children and took up a managerial role with Basketball Australia. With the help of medical marijuana, she was eventually able to return to the court – for social, mixed basketball. But international basketball remained a world away.

But then, one thing led to another. A comeback in the domestic league. A return to the Opals training camp. A call-up to the squad for the World Cup. And, on Saturday, one last medal for Australia.

Ever since Jackson burst onto the scene in the mid-1990s, she has been destined for greatness. An exhaustive list of career highlights would fill this entire column. A five-time WNBL champion in Australia. A two-time WNBA champion in the United States. An all-star, an MVP. Name the plaudit and Jackson has earned it. She has taken women’s basketball, in Australia and around the world, to new heights. And she has consistently performed her best in national team colours. Of the five World Cups and four Olympics in which Jackson has played, she has won a medal in all but one (including, most memorably, the Opals’ lone world championships crown, in 2006).

But without the events of the past two weeks, Jackson’s legendary career would have always been marked by an asterisk. Hers would have been remembered as a remarkable career, but also a career cruelly cut short by injury. No longer. Having been denied the fairytale ending in 2016, Jackson has finally bowed out in circumstances befitting her elite status within the game. A truly appropriate ending to a career the likes of which Australian basketball may never see again.

It may read like a Hollywood movie, a story foretold. But there was nothing inevitable about the Opals, with Jackson back, returning to the medal rounds in Sydney this week. The Australians were in disarray in Tokyo, having lost star player Liz Cambage. The team barely scraped through the group stage and were beaten convincingly by the United States in the quarter-finals. The scars of Cambage’s exit from the team in controversial circumstances lingered within the playing group (and fair enough – the Opals were built around her, and had to switch tactically at the last moment).

A year on, the team has shown impressive growth and evolution. Accepting that Cambage appears unlikely to return to the national-team fold, the Opals have restructured on the court and focused on rebuilding team spirit off the court. Jackson has said how impressed she was with the atmosphere within the camp upon returning.

The team remains one in transition. New stars like Ezi Magbegor are shining through, and there is a core, experienced group. But equally, the Jackson generation is largely retired and veteran Marianna Tolo is reaching the end of her glittering career. Australia’s loss to France, the Tokyo 2020 bronze medallists, in their opening match of the World Cup underscored lingering defensive frailties and missing offensive spark.

Yet the Australians bounced back, going undefeated through the rest of the group stage and building momentum into the knock-out round. The team looked assured in a quarter-finals win over Belgium. Even a heartbreaking semi-final loss to China, by two points, was a remarkable show of improvement on the turmoil of recent years. And to recover and go on to comfortably defeat Canada, to win the Opals’ sixth-ever World Cup medal, showed maturity and depth.

Time stops for no one – even if Jackson has turned back the clock over the past two weeks. The Opals must now turn their minds to qualifying for the Paris Olympics, in two years’ time, and begin preparing for yet another tilt at the gold medal which has always eluded them. Jackson will return to her role leading women’s basketball for Basketball Australia (she cut down her work hours during the tournament, but was still firing away emails during downtime). By all accounts, Saturday’s performance will be her last in the green and gold.

But what a way to go out. One last dance for one of the best there has been. One last medal for Lauren Jackson.