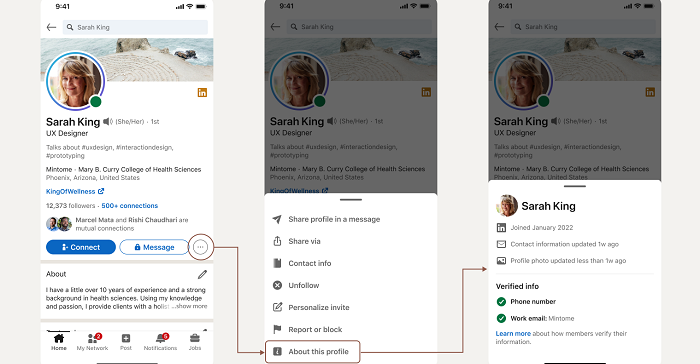 LinkedIn has announced some new features to help combat fraud and spammers in the app, including new insights into when a profile was created, new tools to detect AI-generated profile images and prompts to help protect users from scam messages.

First off, LinkedIn’s adding a new ‘About this profile’ element, which will provide more insight into when a profile was created, when it was last updated, and more. 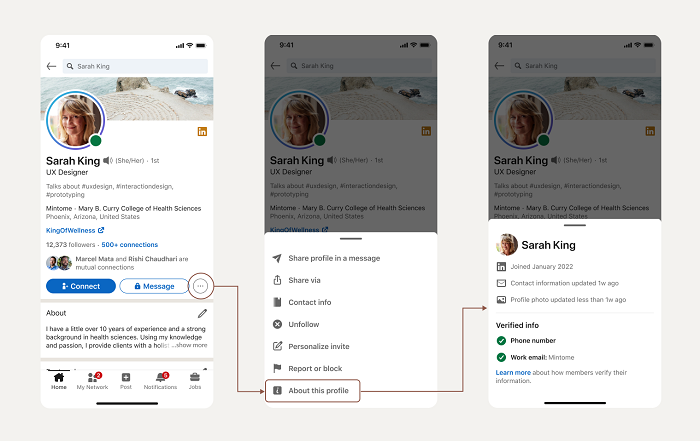 As you can see in these images, the new ‘About this profile’ element, accessible via the three dots menu on any profile in the app, will include info on when the profile was updated, along with whether the user has a registered email or phone number in the app.

That could help to determine whether it’s a real person looking to connect, or a scammer seeking to steal your info – which has become a more prominent issue of late.

Just last month, MIT Technology Review published an article about the ‘millions’ of fraudulent LinkedIn profiles that have been detected trying to lure unsuspecting users into scams.

“A scammer on LinkedIn may try to connect with someone through common work experience, a shared hometown, or the feeling of living in a foreign country. Over 60% of the victims who have reached out to GASO are Chinese immigrants or have Chinese ancestry, which these actors lean on to evoke nostalgia or a desire for companionship. The fake claims to have graduated from China’s top universities, which are notoriously difficult to get into, also help scammers earn respect.”

The scammers then use these lines of connection to lure users into crypto investment scams, while MIT also notes that LinkedIn victims ‘tend to lose more money than victims of fraud on other platforms’.

In addition, over the past year, two separate databases of LinkedIn user info – one, reportedly, with 500 million records, and another with 700 million – were found being pitched to potential buyers on the dark web. LinkedIn investigated each, and found that the information had not been obtained through hacking, but via data scraping, a practice that LinkedIn has been looking to outlaw via legal means for years.

Much of the scraping in these cases only saw the scammers obtain some information from LinkedIn, which they then matched with other databases, but there are also cases where scammers have connected with users in the app to then gain access to even more information about them and those in their networks.

Given the rising prevalence and concern around such incidents, LinkedIn’s been working to update its security tools – hence this update – and this new feature could be an extra measure to help you determine who you should connect with, and who you should avoid in the app.

On another front, LinkedIn has also improved its machine learning and AI models to better detect uploaded profile images that have been created by an AI image app.

As explained by LinkedIn:

“Our new deep-learning-based model proactively checks profile photo uploads to determine if the image is AI-generated using cutting-edge technology designed to detect subtle image artifacts associated with the AI-based synthetic image generation process without performing facial recognition or biometric analyses. This model helps increase the effectiveness of our automated anti-abuse defenses to help detect and remove fake accounts before they have a chance to reach our members.”

This is going to become a more prevalent problem over time, as AI image generators get better and better at creating convincing replicas of real world content.

They’ll also likely get harder for systems to detect – which is why it’s important for LinkedIn to keep its systems up to speed on the latest updates, to help remove fake profiles before they look to interact.

Finally, LinkedIn’s also adding new warning prompts on DMs that include ‘high-risk content that could impact your security’. 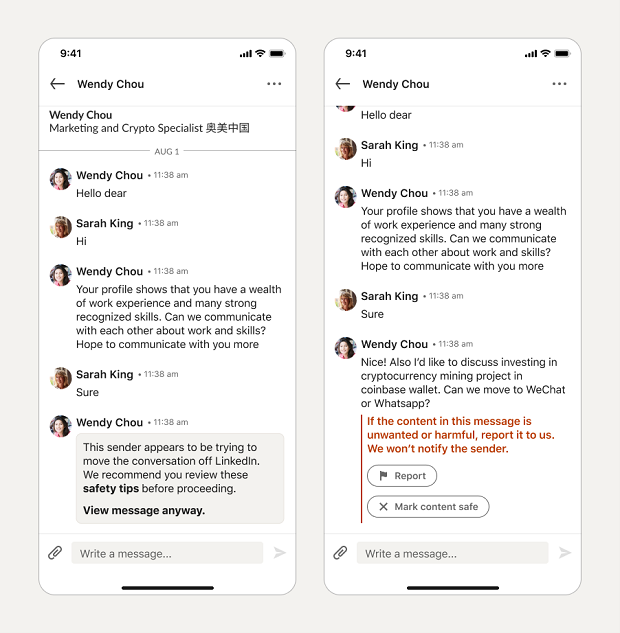 As you can see in this example, in the first screenshot, when the user looks to refer the chat to another app, LinkedIn will now prompt the recipient to read its safety tips, as referring the conversation to another platform is a common approach by scammers.

In the second, you can see what the message looks like without the warning screen, where LinkedIn will also include a direct option to report the message if it’s a concern.

In combination, these new features will provide more protection for LinkedIn users, and help LinkedIn better detect and enforce its rules in such situations.

And as noted, with more high-profile incidences of scams proliferating on LinkedIn, it’s an important area of focus, both to reassure users of their safety and to eliminate the impacts of the same.