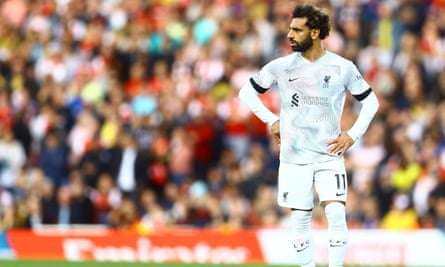 It’s never just one thing. Football, whatever the cliche may say, is not a simple game. A team is a hugely complex organism: a malfunction in one area can have profound consequences elsewhere. Everything is connected and contingent; nothing is independent. Jürgen Klopp must feel at the moment as though he is engaged in a game of Whac-A-Mole, bashing at problems here and there, and yet also knowing that these moles are related, that a mole in one corner is breeding moles elsewhere.

But let’s begin with the most obvious issue, the great culture war of our time: the Trent Alexander-Arnold Conundrum. Already it’s one of those issues that has become almost impossible to discuss properly, arguments yielding to meta-arguments as everybody rushes to deeply entrenched positions.

Somewhere between the extremes is the reality, and it is surely what Klopp explained, with a sense of exasperation, last week. Alexander-Arnold is a brilliant attacking full-back, one of the best strikers of a ball in the Premier League but defensively, when a forward runs at him, say, or in protecting the back post, he is some way short of the abilities of, for instance, Reece James or Kyle Walker.

Liverpool have got the best out of him by playing to those attacking qualities, encouraging him to spend most of his time in the opposition half, something they can do because of the intensity and precision of their press. When that press goes awry, as it did in 2020-21 and as it has this season, Alexander-Arnold becomes vulnerable to balls played into the space behind him. Klopp could protect against that by having Alexander-Arnold defend deeper, but to do so is to have him focus on the weaker aspects of his game at the expense of the stronger. And that’s also why Southgate, having the luxury of a glut of talented right-backs and knowing the limited time available means England’s press can never come close to Liverpool’s, prefers other options.

As the press has failed and Alexander-Arnold has come under increasing scrutiny, and as opponents have begun to target what is now an obvious vulnerability, his confidence appears to have waned and it was that was much as anything that was the problem on Sunday.

The second Arsenal goal was, from Liverpool’s point of view, a shambles. A lot of modern tactical thought is geared to setting a team up to deal with attacking to defensive transitions, so that they have the structure to defend against a counter if possession is lost. As Arsenal regained possession, a three-on-three break transpired. That’s already non-ideal, particularly given the rapid Gabriel Martinelli was running at the not-so-rapid Jordan Henderson.

Alexander-Arnold, presumably looking to protect his captain, left the position he had in the centre of Liverpool’s three covering players to also close down Martinelli, but that meant abandoning Gabriel Jesus and so Konstantinos Tsimikas had to leave Bukayo Saka to pick up the centre-forward. Perhaps that wouldn’t have mattered had Thiago Alcântara charged back to add cover, but he dawdled to such an extent that by the time Martinelli checked back and crossed to the back post for Saka to score, both Martin Ødegaard and Darwin Núñez had surged past Thiago into the box. When Klopp said afterwards that he blamed the defeat not on the “system” but on “deeper concerns”, that apparent lack of urgency was perhaps what he was talking about.

But Alexander-Arnold’s travails are not just about the press, his waning confidence or his scrambled decision-making. That whole right side is not firing as it did in the first half of last season. Henderson, perhaps in part because of injury, is not at his peak. But there must also be major questions about Mohamed Salah, who has scored just six league goals from open play since returning from the Africa Cup of Nations in February.

As with Alexander-Arnold, form has waned amid structural issues. Signing Luis Díaz meant Sadio Mané moving to the middle and he did not drop deep to create space as Roberto Firmino or Diogo Jota did, which meant in turn Salah having to stay wider. The arrival of Núñez has not changed that.

Before he went to the Cup of Nations last season, Salah averaged 3.9 shots per game. This season he is averaging 2.9. He simply doesn’t get in the box as much as he once did. A year ago, Salah wobbling in from the flank as Alexander-Arnold swooped outside him was a characteristic Liverpool move; that’s neither possible nor practical with Mané or Núñez in the way. He had just one shot amid only 27 touches against Arsenal before being withdrawn after 69 minutes – Klopp said because he was worried about his workload given the defensive shift he had put in (not that that resulted in either a tackle or an interception).

But what can Klopp do? It’s not necessarily a reflection of the qualities of Díaz, who is also now injured, or Núñez to point out that changes to the forward line have diminished the attacking effectiveness of the entire right side and transformed a player who had scored 118 league goals in five seasons into the spluttering figure who has managed just two in eight games so far this.

The forward line, the right side, the back of midfield, a 14-point gap to the top – everywhere, the moles are massing.