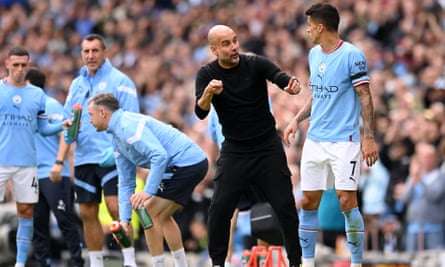 “Yeah, not bad.” With 44 minutes gone at the Etihad Stadium Manchester City scored a goal that brought the usual cheers and roars, but also something else, the urge to laugh.

City had already spent the first half playing football that seemed to have benefited from an operating system upgrade, demonstrating the latest miracle processor against a batch of red-shirted patsies.

The move to make it 4-0 was a moment of super-compression, lines cut in a perfect zigzag from outside City’s penalty area to the far left-hand corner of the Manchester United goal without friction or drag or loss of scale.

It took eight touches to make it, starting with Kevin De Bruyne surging through the centre, shrugging Christian Eriksen off like a rugby centre while delivering a fine touch to Erling Haaland. The pass basically told Haaland what to do. He took one touch to make the space then curled a dream of a pass that took out three defenders and found Phil Foden, already networked into this, already in the chat, bullocking through to zing the ball into the corner.

And in that moment 4-0 really didn’t feel like a stretch, or a surprise, or even much of a humiliation for United, who had spent that half chasing ghosts and shadows, shapes at the edge of their eyeline.

By the end a 6-3 defeat was even quite generous. But then this was also a strange game, not the usual thrashing, some tactical oversight exploited, or a career-high performance. It felt like something else, the result of unarguable maths. On the one hand a mortal, everyday football team, all joins and cuts and snagged gears. On the other a blend of pure imagination and bottomless resources, 12 years in the making, finessed and refined to create this fine pitch of touch and movement. And yes Haaland was right. It wasn’t bad.

Haaland will draw the eye naturally. He scored a brilliant hat-trick and never at any stage looked like doing anything other than scoring a brilliant hat-trick. All being well Haaland will score 78 league goals this season at his current rate. This is obviously an impossibility. Something will happen to stop him scoring. But what exactly? It’s not like he’s on a hot streak or playing above himself.

After that poor start in the Community Shield some cautious judges had suggested Haaland would take time to settle at City. And they were right. It did take time. It took one game. “If I time my runs properly I know that no one can stop them,” he said before this game. This might sound like arrogance from another footballer. With Haaland it’s just true. He’s run the numbers. It’s empirical fact. Just letting you know.

Haaland’s first here, City’s second, was made by a vast standing jump in from a corner, the kind of leap that is beyond most humans of this size, the kind of leap where Haaland seems briefly to blot out the sun. His second (3-0) was a hooked left-foot finish from one of those De Bruyne passes that step outside the usual categories of cross and through ball to create some new kind of trajectory, an angle that exists at De Bruyne degrees to the earth.

For all the starry moments a big part of what City did here was their defensive cover and the architecture of the midfield. They counter-pressed fiercely. There was a glimpse of how Pep Guardiola might make this iteration work in a high-speed opening spell in which Jack Grealish and Foden stayed wide, while De Bruyne kept shifting sides to double up: like some super-slick version of old‑school 4-4-2, Wilcox and Ripley with Shearer in the middle, but replaced by a blur of blue-shirted overlaps and an insatiable Nordic goal-devourer.

The game was over by half‑time, and even more over by the time both teams emptied their benches. Perhaps Erik ten Hag might take heart from winning the second half 3-2, a deceleration that felt like a note of early-season misdirection from City, like Shane Warne spending two days bowling badly at Graeme Hick before the first Test just to keep a little mystery.

What really happened here was United met opponents operating on another plane, high-speed digital football versus a kind of hand-cranked dial-up version, football yelled down a piece of twine between two cans.

What are we to make of this? Are there notes of doom in City’s brilliance? The president of La Liga, Javier Tebas, spoke again this weekend about nation-state super-clubs skewing the field, killing competition and so on.

But that kind of talk just doesn’t add up at this elite level. Both of these teams have spent vast amounts of money, as have Real Madrid and Barcelona.

The difference is that City have done it well, have cheated by removing human frailty, short-term commercial greed, boardroom stupidity from the equation. Chuck in bottomless resources and the greatest coach in the world and the result is this: something without edges or drag, a project that will perhaps soon reach its final expression; and which in Guardiola’s hands remains unarguably a thing of beauty.