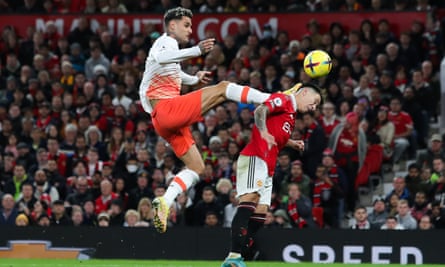 First Gianluca Scamacca shot from 10 yards and Lisandro Martínez’s body was in the way, then the two darted for the looping ball, the Italian striker with a raised right boot and the centre-back head first. Martínez won the race to end the attack. His reward was a boot in the face, not that he cared, having completed his job of stopping a goal. A clean sheet is the most important thing, regardless of personal cost.

The final moments of Manchester United’s 1-0 win against West Ham were a scrap, a concept in which the hosts have not always been willing participants. Martínez was at the heart of it, his teammates following the demanding standards set by the Argentinian. Limbs and torsos were put in the ball’s path to ensure Marcus Rashford’s first‑half header was the difference.

When Martínez arrived at Old Trafford for £48.3m there were questions raised about his suitability for the Premier League because of his height, standing at 5ft 9in, not a figure often associated with a centre‑back. The early signs were underwhelming as United lost at home to Brighton on the opening day and were then roundly thrashed by Brentford 4-0. The back four for those two games was Diogo Dalot, Harry Maguire, Martínez and Luke Shaw. Three months of Erik ten Hag’s coaching has improved them all.

In the meantime a partnership was growing between Martínez and Raphaël Varane but the France defender will be missing for his club until after the World Cup. Victor Lindelöf missed out against West Ham, forcing Ten Hag to call upon fourth-choice centre-back Maguire, who was brought back in to rekindle a previously faltering partnership with Martínez.

“There is a growing bond between these players and the stronger that becomes, the harder it will be for our opponents,” Ten Hag wrote in his programme notes. A key part of that is Martínez, one of two players he brought to United from his previous club Ajax to help build a similar team spirit.

Martínez is the type of defender fans enjoy watching, throwing himself into every tackle and into the away end when required. It is glorious to see a perfectly timed sliding challenge, especially if the opponent is brought down as part of the deal, an art Martínez has perfected.

Martínez sets the tone, an example to those in front of him, giving solidity to the team’s spine. When in possession he is efficient, quickly passing the ball to Christian Eriksen or Casemiro to instigate attacks at speed, but Martínez is also capable of a pinpoint long pass when required.

When forced to clean up a teammate’s mess, there are no complaints, he just does his duty. He is not a man that enjoys fuss. As early as the second minute Martínez was in action when Saïd Benrahma was played through on goal in the left-hand channel behind Maguire. Martínez soon spotted the danger and moved into the vacant space to hold up Benrahma, forcing him into a weak shot that was blocked.

There was constant dialogue between Martínez and his captain. Maguire’s lack of match action will have been a concern, while Martínez giving Scamacca 20cm in height was a worry. Knowing the other’s weaknesses, as well as strengths, helps create partnerships. The two swapped sides frequently to allow Maguire to mark Scamacca when an aerial pass was expected and Martínez was aware of the space often left by Maguire that he needed to cover.

Having seen off Scamacca, Martínez was greeted by the substitute Michail Antonio, a man with a point to prove. The Jamaica striker is a greater physical threat, which Martínez quickly learned about when bouncing off his shoulder. Not perturbed by the incident, Martínez got up close and personal with his new foe, to ensure he knew that bullying was not an option.

Martínez has found a way of marking far taller opponents, using his body to prevent them getting to the ball. With 13 minutes left on the clock, it looked as if Craig Dawson would tower over him to head an equaliser at the back post, only for Martínez to get to the ball first. A powerful Declan Rice shot in the closing stages was flicked away, too.

United have conceded twice in their past five league games since shipping six at Manchester City. Goals win matches but defences win titles and United finally have a backline that can bring confidence to the rest of the team. When a side is regularly leaking goals, it brings nervousness throughout; forwards live in fear of missing chances because they know they need to score more than one to win matches. Although United impressed against West Ham, they struggled to convert chances, meaning the efforts at the other end were significant and rightly rewarded with three points.

There has been a need for grit at Old Trafford for a long time. In the final minutes against West Ham the hosts had their backs to the wall but they held their own, led by Martínez’s desire and commitment, with a little help from David de Gea. Being able to scrap to victory is a great trait and Martínez will always be ready to lead United into battle.