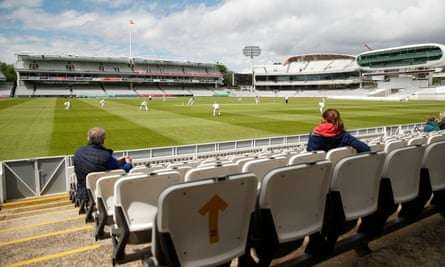 There’s a classic Fry and Laurie sketch where two Test Match Special-style commentators work themselves into a state of ecstasy with their observations on pigeons, buses, mown grass and the like. “Creamy old England … custard creams … strawberries and cream!” they yelp, climactically. The comic pair always enjoyed satirising the nostalgic cult of Englishness; now Stephen Fry is about to become president of one of the most nostalgically English institutions in sport.

It’s a smart appointment, not least because absurdist comedy is an excellent grounding for any role at Marylebone Cricket Club. On Monday Fry takes up his year-long position as president in the wake of a big week for MCC. First it had to weigh in with an official ruling on the Charlie Dean run-out that capped and, in some minds, ruined England’s final ODI against India at Lord’s. Then it temporarily reinstated the Eton v Harrow and Varsity matches, whose removal had Henry Blofeld threatening seppuku on his little red membership card.

All this made headlines because MCC, whose 18,000-strong membership exists largely as a cheap subscription to seats at Test matches, retains a legacy influence in the administration of the game. Also because there’s nothing more schadenfreudean than the words “civil war at Lord’s”. The conciliatory event last Tuesday – when a potentially rancorous meeting and divisive vote was called off at the last minute through compromise on both sides – was inevitably reported as a humiliating U-turn. It was even said to be an embarrassment for Fry, who had no role in the proceedings and seems constitutionally unlikely to be embarrassed by any of this.

Outside the Grace and Heyhoe Flint Gates, the fuss over whether to host a couple of historic fixtures merits little more than an eyeroll. Only at MCC, one of sport’s most conservative institutions, do malcontents rebel not because they demand change but because they emphatically don’t. Some have threatened to resign their membership which, given a 29-year waiting list, is unlikely to hurt the club and might actually move it in a more progressive direction.

Not that anyone will follow through on the threat. It would mean sacrificing a privilege, the very thing they’re protesting against. After all, the matches under debate are nothing but privileges. Eton v Harrow and Oxford v Cambridge are no longer high-class sporting contests nor must-attend social events – as evidenced by the fact that MCC members themselves don’t go to them and the teams play to an empty ground. The circular argument from the camp wishing to keep the games at Lord’s is that they should be better promoted. Mate, if you can’t be bothered to go yourself, don’t think you’re going to persuade anyone else.

Do four undeniably elitist academic establishments deserve their own special day at the sport’s most high‑profile and in-demand ground, for the sole reason they’ve always had one? That’s the fundamental question here, which those in favour call “preserving history”, and those against call a jolly good run of luck for the 44 people they involve.

Lord’s doesn’t host a Gentlemen v Players match any more. People don’t grieve its loss. It remains a much-told part of the club’s story. No one is vandalising history because they’re comfortable with the suggestion that two moribund fixtures find a new home – smaller grounds would infuse them with more atmosphere and might even revive their popularity. It’s not disrespectful to the heritage of the most famous cricket pitch in the world to widen the opportunity to play on it.

The proposal is for the Eton v Harrow and Oxbridge matches to be replaced by the finals of two new school and university competitions, incentivising and ultimately rewarding the best young players in the country. Even the over-my-dead-body traditionalists, championing matches they don’t go to, don’t challenge the merit or intent of that idea.

They focus instead on scholastic arguments about how many playing days can be accommodated on the Lord’s square, and complain – this isn’t a joke, by the way, but actually part of their submission – that there were many more matches in 1962. The calendar 60 years ago is utterly irrelevant today, given that it involved the preparation of far fewer – and worse quality – wickets.

But then they know that, because they’re cricket lovers. This is a symbolic protest, a proxy battle, a howl of frustration at a world that’s changing too quickly. MCC has form at fighting last century’s battles; it took three separate attempts to secure female membership, and that wasn’t till the 1990s, for God’s sake. The club has got it wrong on justice and equality so many times in its long existence, maybe this pearl-clutching reaction is indeed another way of preserving history.

What’s crazy is that MCC requires a purpose. Ever since it ceased to be cricket’s mover, shaker, and ultimate authority, it has needed justification for its oversized influence. Being a repository of the past, or the landlord of the sport’s most famous ground, isn’t enough.

Many members are rightly proud of its pioneering experiments, the fact that it can use its exceptional independent wealth and connections to improve and grow the game. If the club wants to continue to play the part it believes it should, then it must demonstrate leadership – and leadership for the game as it is today, not as it was 200 years ago.

No wave of resignations followed the vote for women, incidentally. Most men in the Long Room now consider it a point of pride to have a co-ed club. Plenty of new traditions that benefit patrons have been eagerly embraced, not least an entire second Test match a year. MCC, which has nurtured cricket for centuries, is full of people who love the game obsessively. Which of them shouldn’t be proud of an action that increases cricket’s relevance today – for everyone?