Mark Zuckerberg’s commitment to his metaverse vision is about to face its biggest test, with Meta’s Q3 results showing rising costs, reduced ad income, and slower growth in key markets.

First off, on usage – Facebook is now up to 1.98 billion daily active users, an increase of 16 million on its last report. 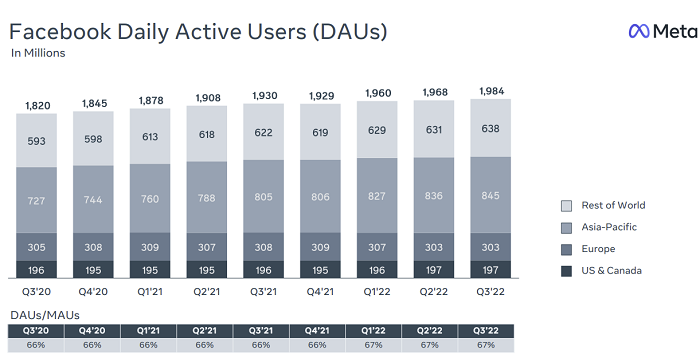 But as you can see, the hard sell for Facebook here is that all of that growth is coming from the Asia-Pacific and ‘rest of the World’ markets, which are not as lucrative for the company as the US and Europe.

Facebook has seen solid growth in India and Indonesia, as connectivity and accessibility increases in these regions, but the overall usage counts here don’t contribute as much to the company’s bottom line. They will, hopefully, as these markets mature, and Facebook continues to grow its presence. But as you can see, DAU growth in the US and Europe is dead, which is a concerning sign for the app.

Facebook’s monthly active user counts reflect a similar story, with almost all of the growth coming outside of its top revenue markets.

But then again, Facebook usage is holding firm, people are still logging into the app every day, with the total user count still pushing 3 billion. I would question whether those who are logging in are spending as much time as they used to in the app (something Meta doesn’t report), but the overall figures do underline the significant role that Meta’s tools still play in our broader interactive landscape, as do its Family Active People stats (i.e. users of FB, WhatsApp, IG and Messenger).

Meta’s apps are still hugely popular. But even so, there are some concerning signs.

Those concerns are further exacerbated when examining Meta’s revenue numbers. Meta brought in $27.71 billion for the quarter, which is still a massive result, but it represents a decrease of 4% year-over-year. 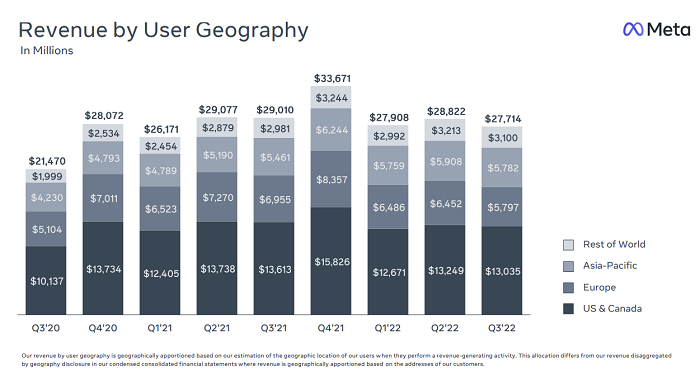 “Had foreign exchange rates remained constant with the third quarter of 2021, revenue would have been $1.79 billion higher”

In other words, there are various factors at play, it’s not one thing that’s hurting Meta’s revenue numbers. But cumulatively, they are having a big impact, which is not good when Meta’s also continuing to invest in its expensive metaverse vision, which has seen its costs and expenses rise by 19% YoY to $22.05 billion.

What’s even worse here is that Reality Labs, its VR department, and its biggest cost center, is also bringing in less revenue over time, as rising VR headset prices, and reduced interest in the metaverse, have seen it declining in sales and revenue intake.

As you can see here, after peaking in Q4 last year, likely due to people getting Quest headsets for Christmas, Reality Labs revenue has declined significantly, while operating losses for the division continue to ramp up.

And Meta says that’s only going to get worse in the short-term:

“We do anticipate that Reality Labs operating losses in 2023 will grow significantly year-over-year. Beyond 2023, we expect to pace Reality Labs investments such that we can achieve our goal of growing overall company operating income in the long run.”

And this does not look great:

It seems the metaverse push is going to cost a lot more in development before we reach the next stage.

This is arguably the most challenging period in Meta’s history, and indeed, in Zuckerberg’s professional career. The company has lost two-thirds of its value since September last year (and that’s before this earnings result), amid rising skepticism about its metaverse vision, ongoing questions about the negative impacts of its apps, and increasing challenges to its ad business.

On the metaverse, as noted, the company continues to sink cash into its future-looking strategy, which, again, still looks like it’s going to cost a lot more before it’s even close to being a workable, functional, viable alternative for digital connectivity and engagement. Zuck’s view is that, one day, we’ll all be interacting in VR/AR powered spaces, which will enhance the feeling of connection well beyond what current social media apps are capable of doing. And that may be true, but it’ll require widespread take-up of increasingly expensive hardware, and really, a killer app or two that will make its VR and/or AR devices a true must-have

Meta has said that it will take years, perhaps a decade, before we reach the next stage – but can Meta and its investors stomach ten years of pain for the possibility of what could come next?

Which leads to the ad problem. Meta has already said that Apple’s ATT data privacy prompts will cost it around $10 billion this year, and it continues to point to ‘headwinds’ in the ad industry which are impeding the performance of its core ad business. Combine a lack of trust in the company with more consumer choice, then add in a global economic downturn, and the result is that Meta’s ad businesses is not as solid as it once was. It’s still good – the vast majority of Meta’s $27b in revenue this quarter came from ads – but the company really needs to keep growing its ad business in order to keep funding its future projects, which, increasingly, looks to be an impossible balance.

You can also add to this Apple’s latest stab at the company – a 30% tax on boosted posts in social apps announced just this week.

So what does Meta do? It’s too late to go back now, it’s already sunk billions into the metaverse and what it sees as the next phase for the company.

It could scale back that investment, as suggested by Brad Gerstner of Altimeter Capital in a recent open letter, in which Gerstner, as a representative of around 2 million Meta shares, said that:

“We think Meta should cap its metaverse investments to no more than $5B per year with more discrete targets and measures of success, as opposed to today’s much more ambitious and open-ended strategy.”

For context, Meta spent double that on its metaverse projects last year, and will clearly best that again in 2022.

Maybe that would be a way to rationalize investment, and keep its projects on track – but presumably, that would also extend the timeline for its metaverse development. And time is something that Meta might not have.

Because Meta’s apps, while still hugely popular, and still, as noted, seeing overall growth in overall users, are also themselves experiencing a downturn in key areas.

The key consideration here is younger audiences, which Meta has conceded are not using its apps like they once were. 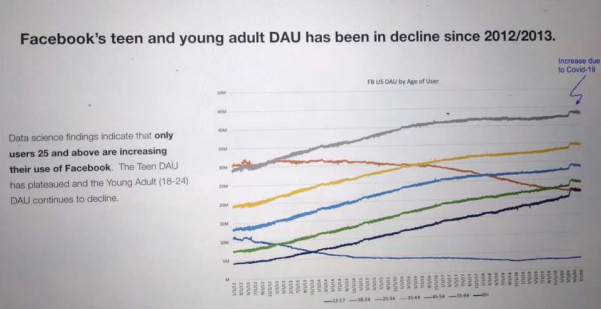 Trends in younger demographics logically ripple through over time, which means that Meta, while it is still a key utility in many respects, is slowly losing ground to other platforms.

It’s not happening rapidly, it’s a steady decline, and it largely relates to time spent in app, as opposed to logging on to check the latest updates then logging off and spending more time elsewhere (which, I would argue, is why Meta’s overall user counts remain high). But it is clearly happening, and while Meta would love to put more time and effort into fixing Instagram and Facebook, and getting its core business back on track, it might not be able to do that, as its replication of every trending app that comes along seems to suggest.

And then there are the concerns around the harm caused by Instagram, how Facebook continues to facilitate the spread of misinformation, how Meta’s plans to encrypt all messages will protect criminals from detection.

When you look at the full scope of Meta’s business, really, it needs to start fresh with the metaverse, and it needs the metaverse to become a thing. Otherwise, it is indeed on a slow and steady descent back to earth.

Again, this is not happening quickly, I’m not saying that Facebook is dead or that Meta will be gone anytime soon, because it absolutely won’t. But Zuck and Co. are logically navigating towards a new future for the company for good reason. And now it’s a race to see whether it can get there, without spending too much, and pissing off too many shareholders, in the process.

All that said, I wouldn’t be counting Meta out too quickly either. Zuckerberg is very likely right, digital interaction in wholly immersive spaces, via avatars, digital goods and more – all of this seems very logical, especially when you look at how youngsters engage in gaming worlds like Fortnite and Roblox. Those are the users Zuck is planning for, not the vocal critics of what the metaverse looks like right now.

And if he gets the timing right, Meta could still be the critical connector in the next phase.

But right now, Zuck and Co. will be feeling the heat, more than ever before.