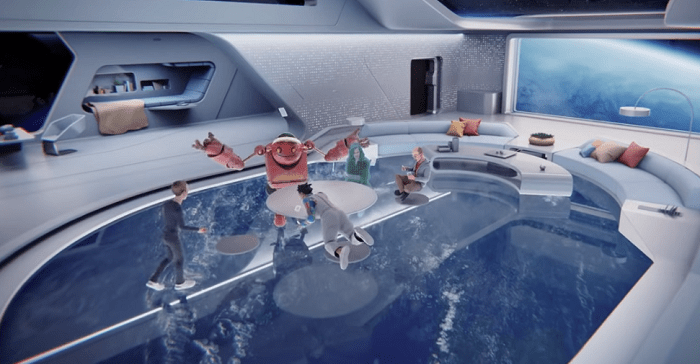 The metaverse has become such a vague term, incorporating so many different tech elements, that it’s hard to say what people really understand about the next stage of digital connection – which, it’s important to note, does not actually exist as yet.

With that in mind, it’s not entirely clear what this new survey data from Meta actually means, in a broader marketing context.

In order to gauge consumer sentiment about the metaverse, and the opportunities that it will provide for brand connection, Meta conducted a survey of 30,000 shoppers from around the world, to see how they feel about different aspects of advancing technology, which Meta has then attributed back to the broader metaverse concept.

“[We] found that today’s shoppers are interested in next-level experiences with brands. Whether it’s exploring a product through immersive technology, or making sure their avatars are every bit as stylish as they are in the physical world, shoppers want a greater sense of connection and inspiration with the brands they engage with.”

Which could point to some significant brand considerations – with some provisos on specific data points.

For example, among their key findings, Meta says that 28% of people are using, or have used AR while shopping, while 42% imagine that AR can improve the shopping experience ‘by bridging the gap between online and the physical store’.

Which is no doubt true – advancing AR try-on tools, in particular, can provide a great complement to the online shopping experience. But that’s not the ‘metaverse’ as such – AR is not the same as the VR worlds that Meta’s building to support its metaverse vision.

It’s this kind of extrapolation of related tech that Meta’s using to promote its metaverse vision, though it’s not actually the same thing. AR, VR, Web3 – these are all elements of tech development that are separate, and while it is likely that you’ll eventually be able to combine aspects of each, it doesn’t all come under the umbrella of ‘the metaverse’ necessarily.

But Meta, which has gone all-in on the metaverse concept, wants to make you think that it does, because it can then lead the way in the broader ‘metaverse’ space, and beat out the competition that may be working on individual elements. Really, ‘metaverse’ in this context is synonymous with ‘technology’, with each of these being elements of technological advancement, not metaverse-related entities within themselves.

Which, again, is important to note does not exist. A fully immersive, fully interoperable digital world, where people can interact in all new ways is not a reality at this stage, and may take years to even get close to being a thing. Not only will it require big take-up of VR, but there’s also work to be done on establishing universal agreements to facilitate cross-platform integration, partnerships that need to be established between tech platforms which likely have little interest in signing any such agreement, along with advancements in body scanning, interaction (i.e. giving VR avatars legs), control tools, etc.

Meta may be keen to place itself at the forefront of the next digital evolution, but we’re not there yet.

But still, Meta’s keen to convince brands that they need to invest now, or risk missing the metaverse boat.

Among other key findings from its survey:

Again, this is based on concept – if somebody showed you one of Meta’s polished, edited, animated depictions of its metaverse vision, you’d no doubt also agree that this could be amazing for how we connect.

But that’s not real. Meta’s selling people on a concept that it cannot deliver just yet.

Will it be able to deliver on such in future? Maybe, but there’s a lot that needs to happen before brands need to truly consider how they appear in a metaverse space, be it the one created by Meta, or any other.

The only real, valuable insight in this new survey comes in the latter elements, and how people view their digital selves:

“Shoppers are ready to start purchasing digital twins – a virtual, identical good that comes with a physical item. In our survey, 46% say it’s important that new real-world products become available as virtual products as well. We found that 46% of shoppers surveyed say virtual products provide a feeling of association with a brand by offering something rare and unique, and 48% say it makes them more loyal if a brand offers a virtual good as a reward for their loyalty.”

This is an aspect that seems will definitely become more valuable, with avatar depictions, already available via Snapchat’s Bitmoji characters, or even Facebook’s own avatars, increasingly being used within online communications and activities.

This stems from gaming worlds like Roblox and Fortnite, where youngsters have spent years interacting with each other in avatar form. That behavior is likely to translate as they move into older brackets, and as such, the depiction of self via digital avatars will become a bigger consideration.

And brands can tap into this to help expand their promotions.

“Avatar personalization is a key driver of the interest in digital goods, and according to our survey, 49% of shoppers want their avatar to look the same as their physical self. Meanwhile, 28% want to appear different, but still like a person, and 23% want to present a more surreal identity.”

This is another important note – part of the emphasis within the recent NFT fad was that users will be able to use their NFT characters as their digital identity, which would theoretically include using depictions of, say, a Bored Ape character as a 3D avatar in these virtual worlds.

But history, and data insights like this, show that this likely won’t be the case. If people can, they’ll choose avatars that look similar to themselves, which potentially lessens the projected value of NFT characters moving forward.

In summary, yes, there are opportunities in future-facing tech, but they likely don’t go as deep, at least at this stage, as Meta wants to make businesses believe.

Meta says that brands looking to ‘fully lean into the metaverse’ can start experimenting with AR try-on effects or build experiences in Meta Horizon Worlds. But the former is not necessarily associated with the metaverse concept, and the latter is not fully functional, or relevant as yet.

But this is what you can expect – many consultants, advisors and entrepreneurs looking to cash in on the early knowledge gap will indeed be keen to tell you that you need to invest in these concepts right now, or you’ll risk losing out, and many businesses, a lot of which dismissed social media in its early stages, will offer up handfuls of cash to ensure that they reserve a seat at the virtual table, and can hook into these new trends.

Do you actually need to be investing in these technologies at this early stage?

Staying in touch with AR developments is likely valuable, and there are various ways to experiment with AR tools that can keep you up to date in this respect, while understanding VR developments is also important.

But what if a new, universal agreement is formed on what the requirements of metaverse avatars are, and that renders your avatar characters obsolete? What if some of these early metaverse projects are not able to meet the eventual requirements of the broader, interconnected metaverse, and are forced to shut down as a result?

There’s a lot that has to happen before the metaverse concept becomes a thing, and it’s important to view each of these elements in isolation, not as a singular, broad-reaching concept.

You can check out Meta’s latest metaverse shopping study here.