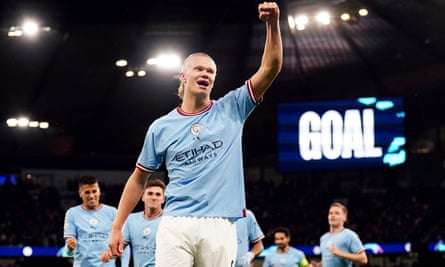 Don’t fear the goal-reaper. Or at least, not while we still have this show. Perhaps the only frustration in watching Erling Haaland this season, the only minor gripe in this more-ish spectacular, is that he isn’t available to binge-watch all at once on demand.

Each time Haaland walks off the pitch it is genuinely upsetting to realise once again that a scrolling ticker will not be appearing in the corner of your vision saying: “Next episode in 10 seconds,” complete with a button you can click impatiently when 10 seconds feels too long. For now it is necessary to wait for the next hit, 3pm on Saturday when Manchester City play Southampton, and when he can once again resume the clean, crisp, beautifully sunlit business of being Erling Haaland.

After that rusty showing in the Community Shield there were some all-knowing observers, this page included, who warned this would take time, that it would be a case of finding a way to fit in. And we were 100% right. It did take time. It took one game. Which is still, technically, time. In reality that afternoon has faded into nothing. What we have instead is something utterly new, a kind of perpetual-motion-football, a substance without edges or drag, an endless conveyor belt of homogenised high-spec product. Basically, I just want more numbers, more Haaland maths. Everyone loves this stuff. A goal every eight passes. A goal every 47 minutes. A 79-goal league season on current rates! Although I am worried that Anfield next weekend may slightly deplete his average. Should City rest him?

Beyond the numbers it is the way Haaland makes you feel that is most striking. We have seen brilliant players before. The difference here is the sense of something uncanny taking place. What does Haaland look like out there anyway? Like the world’s smallest, perfectly formed giant. Like the all-powerful warrior god of the dolphins. Like the feeling of leaping two-footed into a prize-winning sandcastle, fed into a gene-splicing machine and then transformed into a footballer.

Is he a robot? Because I’m also hearing monster, alien, cyborg. I’m hearing creature of the forests

Mainly, though, there is that sense of “othering”. A petition stating Haaland should be removed from the Premier League because he is in fact a robot has already drawn 1.8m signatures. The suggestion seems to be that we’re going to cut across a little too quickly and catch him soldering on his own arm or drinking a bottle of metal. But is he a robot? Because I’m also hearing monster, alien, cyborg. I’m hearing creature of the forests. I’m hearing ravenous Nordic goal-yeti.

Clearly what this is really about is fear of change, fear of the paradigm shift. All sport tends towards perfection. Pretty soon someone is going to score a hundred off 17 balls in cricket and that will be cricket pretty much done. Football has resisted that process for now because it contains so many human variables. Chuck what you like at it, this thing won’t be tamed or made predictable.

Or will it? Against Copenhagen on Wednesday Haaland produced almost the perfect 45-minute game. He had 11 touches. Four of them were shots (all on target). Three were completed passes. One was a tackle, one being fouled, one an “unsafe touch”.

That made 10, plus one ghost touch. It is tempting to brood over that missing touch, raw, untempered Haaland, out there existing beyond the lines, to see human hope here, John Connor stirring in the rubble.

But how long before the perfect game happens? And then happens again? Where does this leave the old certainties? Is Alan Shearer still good? Is the thing that was my thing still real? It is tempting to wonder whether Pep Guardiola can feel this too, out there on his touchline looking a little odd, dancing and talking to the crowd, a man who finds himself suddenly behind the wheel of a self-driving car.

It turns out after all that manic hands-on engagement, the new tactical forms, that this is the way to do it: a great pounding goal-fist up front and Guardiola reduced from the hands and the brain of his team to the managerial equivalent of hovering near the self‑checkout tills in case anyone needs a bag. Perhaps he can he get City to the Champions League final then drop Haaland and play three false 9s just to feel something again. Is this what the fear is about?

None of this is fair of course, or accurate, or particularly serious. Haaland is not actually Skynet. He is simply a brilliant, level-headed young player, as others have been in the past. He is in the hands of a brilliant coach, given more resources, more backup, better data and diet, more intensive coaching than any other in history. Little wonder what emerges is something sublime and also annihilating.

This is more complex than simply bolting on a great scything goal blade. Haaland has made the other parts of this team work better, has provided Kevin De Bruyne with an assist-muse. He has also improved his own game, and not just in passing and movement. Even with City’s resources it is a serious feat of coaching and refinement to get this good.

And yet there is also something in that fear, something more general. If this City team have an uncanny quality, it lies in the fact they resemble more than any other (Paris Saint-Germain still look like a team assembled by a five-year-old megalomaniac) the concept of the super-club; and beyond that of billionaire-ball, sport as a place where failure, the jeopardy of actual sporting competition, is incompatible with the business or PR plan.

It is the paradox of the nation-state project club. Here are a team so well put together, so free of commercial anxiety, that they have the capacity to take this sport away and put it in their pocket. Which is nevertheless a thing of genuine beauty to be treasured. Elite football has been yanking away at those restraints trying to become this thing. Well, here it is. Just sit back and keep counting the goals.