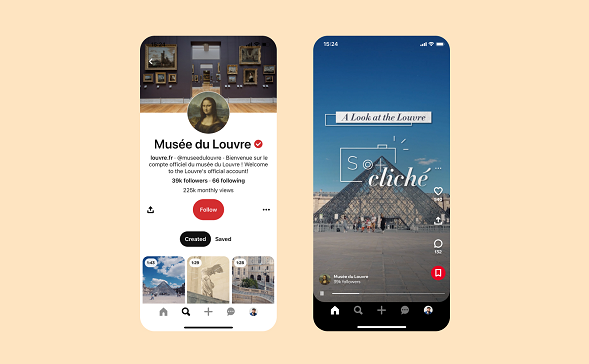 Pinterest has announced a new activation, in partnership with The Louvre, which will enable users to experience the historic art gallery via video elements within the app. 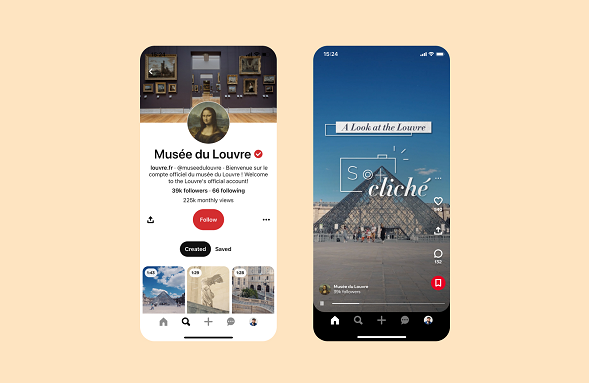 The video series will take users behind the scenes, and showcase unseen elements of the space, providing more engagement opportunities.

“Through a series of original videos, ”A look at the Louvre,” shares the museum’s masterpieces and architecture at the crossroads of centuries. The content features off-the-beaten-path tours to discover both its collections and the museum’s courtyards and staircases, as well as unusual places. The videos invite viewers to admire details within the museum, such as beautifully crafted ceilings and views from the windows.”

The new initiative is designed to expand Pinterest’s original programming, and make it more of a destination for entertainment, along with shopping – though shopping remains the app’s key focus, with Pinterest noting that it’s also looking to boost its live-streaming credentials.

“The goal is to develop an ecosystem of creators, enrich content production and accelerate live streaming on Pinterest. In the coming months, more original programs will be introduced across Pinterest’s core categories such as cooking, travel, decoration, and much more.”

Live-streaming has become like the Holy Grail of eCommerce, with every platform with an interest in in-app selling now looking to integrate live-stream shopping, and follow the trends popularized in Asian markets.

Live-stream shopping is now a habitual behavior in China, and some other regions. And while western audiences haven’t been as open to the experience as yet, if it catches on, it could be a huge business opportunity, while also providing a lifeline for creators via direct monetization in-app.

Pinterest, which now bills itself as a ‘discovery platform’ with a focus on products, would love to also get in on that wave. So while this new initiative, right now, is more focused on cultural history, and engaging users through unique, thematic content, the longer-term view is that more entertaining video will eventually lead to more selling opportunities via the same.

It makes sense, and if live-stream shopping does catch on, Pinterest, most definitely, will want to ensure that it stays in touch.

As such, this is just the first step in Pinterest’s new video content direction.