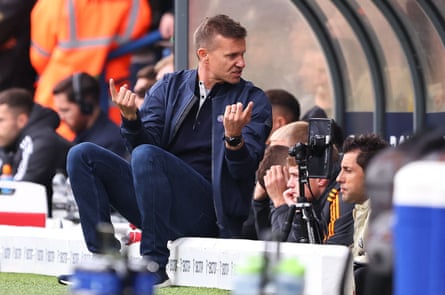 Brendan Rodgers revived? Five matches in October have brought three wins, just one defeat, and four clean sheets. Picking off fellow strugglers Leeds and then Wolves in a resounding 4-0 win lifted Leicester out of the bottom three but there is plenty of work to be done. Rodgers’ immediate target is to reach the World Cup break clear of the relegation zone, though facing Manchester City is likely to be unhelpful. Leicester’s newfound defensive strength has been widely attributed to the form of Wout Faes but the aggressive, tousle-haired Belgian might be saved the ultimate test against Erling Haaland given that he’s a doubt with the foot injury that prevented him playing the second half at Borussia Dortmund. Leicester have occasionally been a troubling opponent for Pep Guardiola. His first visit to the King Power in October 2016 ended in a Jamie Vardy-inspired 4-2 loss and the moment he was famously moved to ask: “What’s tackles?” John Brewin

It was a classic sliding doors moment. Unai Emery changed his mind about swapping Villarreal for Newcastle last November and Eddie Howe took the St James’ Park helm instead. But what might have happened had the Spaniard accepted the posting? Would Newcastle have won last season’s fight against relegation? Might they be flying so high in the table now? And where would Howe have ended up? Given Newcastle’s radical improvement under the latter there is a widespread sense that they had a lucky escape with Emery, allied to intrigue as to how the former Arsenal manager might do at Aston Villa. Work permit issues dictate he will not be in the technical area on Saturday – Emery officially starts work at Villa on Tuesday – so, with caretaker manager Aaron Danks on the touchline, there will be no tactical contest with Howe. Louise Taylor

Graham Potter returns to Brighton after seven weeks at Chelsea, during which time his former club have not won a single match. After Tuesday’s 2-1 win at RB Salzburg, he remains an unbeaten Chelsea manager. Casemiro’s headed equaliser last week for Manchester United denied Potter a first statement win but his new club’s fans are coming to understand how he made his reputation by the sea. Thomas Tuchel’s Chelsea often suffered for their rigidity while Potter’s flexible tactics have made the team more attractive to watch yet difficult to beat. Players like Mason Mount, Kai Havertz and particularly Ruben Loftus-Cheek have been given chances to shine. Roberto De Zerbi’s yield of two points from a possible 15 is unpromising so far and Brighton’s previous defensive strength has been lost owing to the Italian’s demand to play the ball out from the back at every turn. Thus far, he has been most successful at showing what a good job Potter did. JB

4) Marsch on the brink at Anfield

Anfield is no place for a struggling visiting manager in need of respite. Last season Marcelo Bielsa arrived under pressure at Leeds and looked condemned following a 6-0 defeat. The end was confirmed following another heavy loss at home to Tottenham three days later. His replacement, Jesse Marsch, faces Liverpool in a similar but arguably weaker position given fans have turned in a way that did not happen under the revered Argentinian. Two points from the last 24 available has also fuelled the unrest. Leeds’ strongest performances have come against the stronger sides this season, however, notably Chelsea and Arsenal, and their manager desperately needs a repeat as he strives to win support and time. It is a considerable task at a precarious moment. Liverpool are unbeaten in 29 Premier League home games. Andy Hunter

An unwanted byproduct of the VAR system has been its use as a weapon of managerial misdirection. On Monday, Gary O’Neil spent post-match railing at it being skewed against his Bournemouth team. “There’s been 10 serious VAR checks and none have gone our way,” he said after defeat at West Ham. “It’s getting ridiculous.” On Wednesday, after Harry Kane’s winner against Sporting was scratched, Antonio Conte staged a yet fiercer attack. “I don’t see honesty,” he said. “I would like to see if this type of decision made with a top team in an important game.” That brought into question his view of Tottenham’s standing. Both managers seethed against perceived injustice but, in both cases, disputing decisions threw a fig leaf over poor performances. Bournemouth rarely threatened Lukasz Fabianski’s goal, while Tottenham made heavy weather against Sporting’s not especially watertight defence. Beyond the dark hints of conspiracy lie two teams struggling for form. JB

Marcus Rashford, Anthony Martial, Cristiano Ronaldo: will Manchester United’s true No 9 announce himself? This, privately, may well be Erik ten Hag’s sentiment. The issue of who leads the attack is a prime threat to success this season. Rashford is top scorer with five but is no ruthless Kane-esque marksman. Martial, a better finisher, is injury-prone (three appearances, no single 90 minutes completed). Ronaldo, 38 in spring, is manifesting an attitude problem anathema to Ten Hag’s all-for-one team ethos. Missing from the roll call of the Dutchman’s five summer acquisitions – Christian Eriksen (playmaker), Casemiro (midfield fulcrum), Antony (winger), Tyrell Malacia (defender), Martin Dubvraka (goalkeeper) – was a centre-forward. January is rarely the best time to dip into the market but Ten Hag may have to instruct his football director, John Murtough, to try to land a new striker. The man chosen against West Ham may score, but there remains a structural problem the manager must solve. Jamie Jackson

A leaner, meaner Nottingham Forest visit the Emirates buoyed by a clean sheet at Brighton and last week’s heroic victory over Liverpool. Steve Cooper knew his side had to go back to basics before rediscovering some of their early-season attacking gusto and they got the balance right on a raucous occasion at the City Ground. That will be harder against an Arsenal team who habitually crush opponents into submission with fast, intense starts, but Forest may feel a little pressure has been taken off them on Sunday. Any kind of result would be a huge bonus and they will hope that, with Arsenal not so fresh from a fourth straight week of Europa League exertions, their chances of achieving one will have increased a notch. Arsenal’s recent second-half performances have been relatively sluggish: if Forest can hold out for 45 minutes, the leaders’ legs might start to feel significantly heavier. Nick Ames

It is probably too late for Dominic Calvert-Lewin to make a late push for a place in England’s World Cup squad. The striker has missed too much football recently and has been powerless to stop Tammy Abraham and Ivan Toney from moving in front of him in Gareth Southgate’s plans. However Calvert-Lewin, who went to Euro 2020 as Harry Kane’s deputy, remains vital for Everton. Frank Lampard’s side had toiled in the final third while Calvert-Lewin was out, but he made a huge difference when he started against Crystal Palace last weekend. His touch to get away from Palace’s Marc Guéhi, followed by an emphatic shot to give Everton the lead, offered a timely reminder of his class. It was the kind of goal that got Calvert-Lewin into the England squad in the first place and he will hope to push on further at Fulham. Jacob Steinberg

For their first game as the favourite team of the United Kingdom’s prime minister, Rishi Sunak’s beloved Southampton travel to Selhurst unbeaten in three and fresh from holding Arsenal last Sunday. Lyanco, the fourth-choice central defender, put in a strong shift to quell the threat of Gabriel Martinelli as an emergency right-back. Should Ralph Hasenhüttl stick with the Brazilian, as might be necessary with Kyle Walker-Peters out for the foreseeable future with a hamstring problem, then he will likely come up against Wilfried Zaha. Palace’s captain disappointed in Saturday’s 3-0 defeat at Everton, as did Patrick Vieira’s entire attacking unit. Zaha’s winning goal against Wolves last week was his first since August and yet he remains his club’s top scorer with five. Zaha, Michael Olise, Jordan Ayew, Odsonne Édouard and Eberechi Eze all share a quality that would probably fit right in among Hasenhüttl’s enigmas. For both teams, inconsistency is the most obvious quality. JB

10) Where will Wolves get a goal from?

It is a truism, but Wolves need goals if they are to avoid relegation and see Fosun Group’s expensive project fall apart. They have only managed five this season and none of them have been scored by a striker. Raúl Jiménez will be back in England from Friday to continue his recovery from a groin injury but, for now, they must soldier on with Diego Costa, whose mind seems more willing than his body. A sliver of encouragement might come in the form of Brentford’s recent defensive record: although Thomas Frank’s side did well to shut out Chelsea and Brighton in the last fortnight there were alarming collapses at Newcastle and Aston Villa, while Arsenal scored three times in west London last month. Brentford are generally strong at home but Wolves will hope that, if they dominate possession and shot count to the extent that still somehow brought a 4-0 defeat to Leicester last week, they can crack them open on Saturday. NA