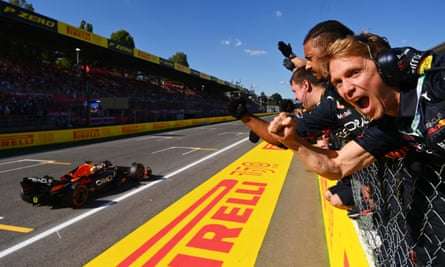 Max Verstappen may be pushing the pedals in Singapore on Sunday as he attempts to seal his second Formula One world championship but the Dutchman and the rest of the paddock know it is his Red Bull team who have been masterfully pulling the strings this season.

Verstappen’s march to the title has been so fearsome it now seems almost as if it was inevitable from the off, yet this was far from the case. 2022 has been a masterclass from an F1 team firing at every level. Red Bull have stepped up at the sharp end with such confidence and precision that they swiftly imposed a sense of inevitable success that left their rivals reeling. On occasion that was quite literally: the nightmare of a Ferrari crew bringing only three wheels to a pitstop at Zandvoort will doubtless haunt Maranello for some time to come.

Verstappen will take the title at Marina Bay if he wins and takes the fastest lap so long as Ferrari’s Charles Leclerc and Red Bull teammate Sergio Pérez finish below eighth or third, respectively. It is not a likely scenario but, regardless,still, if it is not sealed in Singapore it almost certainly will be at the next race in Japan.

Expect one of Verstappen’s first reactions when the deed is done to be thanking his team profusely and showing gratitude for the car they have developed. Both have been exceptional, regardless of the noise now surrounding the team over allegations of breaching the budget cap last season.

After they expended so much time, energy and money in a brutal title fight last year there were fears it might have been at the expense of this year’s model but under all-new regulations Red Bull’s chief technical officer, Adrian Newey, delivered another mighty ride in the RB18.

The low-drag concept – allied to a powerful engine and Newey’s brilliant exploitation of the new ground-effect aerodynamic rules – delivered one of Red Bull’s most complete cars for almost a decade. Strong through the corners, it was now also mighty quick in a straight line and, in Verstappen’s hands, easy on its tyres – a combination in race pace no team has been able to match.

By the second half of the season the RB18 was formidable regardless of the circuit, as the former Red Bull driver Mark Webber observed. “Their car is immune to different venues, that’s probably the biggest string in their bow,” he said. “They can take the car anywhere and the thing comes out of the back of the truck like a missile.”

But that this was truly a team effort, beyond Newey’s design, has been made clear as the season progressed. First, they have developed with an aggression and focus that has proved vital. When the season opened the car was as much as 10kg overweight, costing about 0.3sec a lap.

Worse still it meant the team could not cure the car’s understeer by moving ballast as Red Bull’s technical director, Pierre Waché, acknowledged: “At the beginning of the season we didn’t have the possibility to move the weight, and it was part of the setup.”

Verstappen loathes understeer, preferring a pointy front end, and his discomfort with it was clearly on show in Monaco, where he was fighting it all weekend. As the season progressed, however, the team shed the weight, adjusted the ballast to allow Verstappen to exploit the best from the car and he took seven wins from the following nine races.

He has also been aided by another of Red Bull’s strengths: precision execution by the team. The strategy calls on the pit wall by principal strategy engineer, Hannah Schmitz, and the team’s head of race strategy, Will Courtenay, have been flawless and in Hungary and Monaco were decisive in securing wins, for Verstappen and Pérez respectively. Their mechanics’ and engineers’ performances over race weekends have been impeccable, not least with a swath of fastest pit stops.

Yet until 2021 Red Bull had not been in a title fight since 2013. They were pushed to the limit last year by Lewis Hamilton and Mercedes but then, as now, there was no ring-rustiness to the operation, no hesitancy and no calamity. Ferrari should have challenged harder but their failings were made all the more glaring by Red Bull’s control.

Webber recognises the team as the same crew he raced for between 2007 and 2013, a commitment to maintaining stability that has been crucial. “Their weapon never got blunt,” he said. “They were always sharp, knowing that when the day comes they will be good to go. They have a ferocious winning mentality”, one that means Red Bull now lead the constructors’ championship by 139 points from Ferrari, another title they will wrap up sooner rather than later.

Verstappen has been at the sharp end of this assault and has proved beyond doubt he is one of the best drivers of his generation. But this campaign he has also enjoyed not only the hardware but the human backing that has proved almost infallible. It is a combination of ominous import for the rest of the sport to ponder as they consider how to challenge the Red Bull behemoth next season.