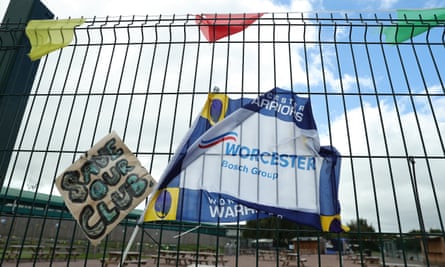 We could start with the sheer catastrophic waste of it all. All those years, all those hundreds of millions of pounds squandered. All the fudged decisions and fingers‑crossed accounting. The oceans of bullshit, the overflowing reservoirs of self‑interest. And yet that’s still not the most upsetting element. Worse is the numbing pain for everyone associated with two disintegrating clubs and the human cost of English rugby’s days of reckoning.

There will be some looking at the travails of Wasps and Worcester and giving a resigned shrug. Of course they were spending beyond their means. Of course that couldn’t go on indefinitely. Of course fingers should be pointed at the stewardship of both businesses. But fundamentally this is about people – specifically the umpteen players, coaches, staff and fans let down by those meant to have their best interests at heart.

A touch emotive? Damn right. Decades ago, I was a frequent visitor to Wasps’ old home at Repton Avenue in Sudbury and grew to recognise many of the qualities that define a great rugby club. Wasps didn’t have much but they were the most welcoming club in London.

They didn’t mind where you came from or care what you did for a living. Instead they chose to operate on the refreshing basis that generosity of spirit costs nothing. Which is why, when they won all those big shiny trophies in the professional era, there was such a feelgood vibe attached.

Worcester Warriors were less successful on the field but were totally embedded in their community. The late Cecil Duckworth poured his heart and soul into the place and the bond between players and fans remained strong right to the end. So to reach a point where other teams are starting to pick at the entrails of both clubs’ horror‑stricken squads and greedily eyeing extra slices of P-share pie is genuinely sad and an appalling look for the English game as a whole.

Again, we all knew it was potentially coming. Remember that classic old cartoon where Wile E Coyote is nudged over a cliff by Road Runner and is briefly suspended in mid-air before gravity takes over? When costs and wages rise more steeply than revenue, a sharp descent inevitably follows. The tragedy – and for once it is appropriate to use that word in this context – of Wasps and Worcester is that this essential truth was not addressed years ago.

Before things can move forward, consequently, Premiership Rugby and the Rugby Football Union must collectively accept that dodgy owners, Covid-19, the dominance of Premier League football, concussion concerns and the cost of living crisis are not, ultimately, what has precipitated the current mess. If those in charge now cannot be blamed for longstanding governance failings, some of their predecessors should be experiencing deep shame.

Those of us who reported on the demise of Richmond and London Scottish in 1999 are certainly entitled to ask why decent folk are still being so brutally shafted. I have never forgotten asking Bristol’s then director of rugby, Peter Thorburn, how he felt as his club neared financial meltdown in 2003. “It’s no use worrying about it, not in public anyway. You do that in bed at night,” the seasoned Kiwi said. “I was quite proud of the fact I had bugger-all grey hair when I came over. I’ve gone a bit greyer now.”

The majority of clubs would have disappeared long ago without the generosity of benefactors well aware they would never see a penny of profit in return. But where were the checks and balances regarding potential new owners, the insistence on sound, fully costed business plans or a concerted desire to strengthen the league’s weakest commercial links? All are now being proposed, with the stable door wide open and the horse already miles over the horizon.

A penny, too, for the thoughts of the private equity bods at CVC, with their £200m Premiership investment not going terribly well. The Premiership “reset” now being talked about, possibly involving a 10-club league from 2024, does at least open up some possibilities, particularly as CVC has already lobbed more than £150m at the United Rugby Championship and £365m at the Six Nations. At last club games and internationals might just dovetail nicely, the season structure could cease to be a dog’s dinner and the top players would no longer be routinely flogged.

But we have been highlighting those same issues for more than two decades. Ditto the need for a more vibrant domestic second tier, in which young English playing and coaching talent can be properly developed. It already seems inconceivable the proposed salary cap increase to £6.4m (from £5m) in 2024-25 can proceed, with player wages set to become more closely linked to revenue.

The RFU chief executive, Bill Sweeney, along with seeing a 10-team Premiership as correcting “a lot of things that have been wrong for a long time” told the Telegraph that the French model – where clubs have to prove their funding is solid before the season starts – was of interest. Bear in mind, as an aside, that France’s broadcast deal with Canal+ is worth about £98m a year, compared with the £37m the English clubs receive from BT Sport.

With an ominous financial wind now blowing through all sectors of the economy, the only hope is that the implosion of two fine clubs finally concentrates a few more minds. “There’s deep sadness for people at Wasps and Worcester but let’s use this as an opportunity to build a longer-lasting future,” said Nigel Melville, who now represents the English club investors.

The days when English rugby union could blithely ignore the basic rules of business have gone for ever.