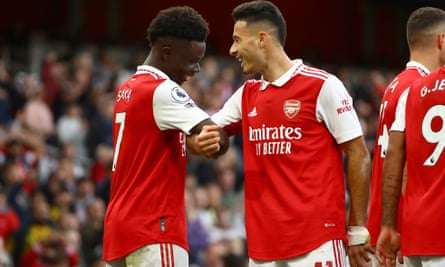 It seemed fitting that the last significant act of this game should be Gabriel Martinelli veering and skittering about in the far left-hand corner of the pitch, still with that maniacal, ferrety energy in his feet, still picking away furiously at the Liverpool defence.

He was relentless at the Emirates Stadium, a pest, a nag, a constant creative press, in a game that saw him torture not just one but two Liverpool right-backs, Trent Alexander-Arnold having left the field at the break after a collision in the first half.

There was a feeling of merciful release in his departure at that point. Martinelli had made Liverpool’s right-back do strange things, take odd choices, to the extent there was something unsettling about seeing a champion player spend the first half basically running in circles. You half expected to see Alexander-Arnold still out there at half-time still whirling around looking for a place to stand, like the last suitcase on the luggage carousel.

The real story here though was Arsenal. They don’t hand out top four places in October of a weird stop-start semi-season with a massive full stop plonked in the middle. That’s ancient footballing lore. But two significant things did happen here. This Arsenal team took a step up.

But it was the way they did it that was striking, the sense of a switch of roles. It was Arsenal here who played like a hard-pressing systems team, a mist of controlled movement; Arsenal who played like Liverpool, that previous Liverpool, the one that will run more, work at your weak points, who create the rage around here. Well, not this time. Instead Liverpool looked like a team of moments and skulking stars, the kind of team they once devoured as an aperitif.

The other point of difference was Martinelli and Bukayo Saka. It has been one of the caveats about this Arsenal team that for all the potential, the clarity of the system, they lack, for now, obvious star players to match those assembled by, say, Manchester City or Liverpool. It is always tempting to call out these moments of transformation. Martinelli and Saka have been brilliant before now. But this was Liverpool, with that trophy-laden four-man forward line; and Martinelli and Saka just took the game away from them.

It seemed pretty clear something would be settled on Arsenal’s left. Martinelli loves those in-between spaces, the same spaces Jürgen Klopp has fretted over and rejigged his lineup to cover. The Emirates was a lovely, soft, sunny autumnal kind of place at kick-off. But it took 55 seconds to tear the day apart. And of course it came down that side. Was this a prepared move? It felt like it, or at least, like something learned and grooved, a perfect tessellation of strengths and weaknesses, as Saka roved across from the right and, released the pass to Martin Ødegaard, who took two steps and felt those shapes to his left moving, the revs starting to build, then threaded a lovely pass inside Alexander-Arnold, who had wandered inside, creating a channel of space. Martinelli surged into that space and finished almost impatiently, already celebrating with the crowd as the ball hit the netting.

Liverpool have lost control of those channels, the spaces that were once their own rapacious attacking highways. And for the rest of the half Martinelli and Saka probed away there, while Liverpool stuttered. Klopp seems intent on recreating Mo Salah’s golden year at Chelsea playing him so wide that his basic Salah-ness is utterly diluted. Stuck out on the right he veered about like a supermarket trolley with a gammy wheel.

There was a fine finish from Darwin Núñez to make it 1-1. But in added time before the break Martinelli conjured the game’s defining moment, surging from the halfway line and then doing something sublime, a shift of feet that sent Alexander-Arnold wandering off weirdly towards the Holloway Road. The cross was perfect for Saka to slide the ball home.

On his touchline Mikel Arteta whirled and punched the air, a trim, mercurial figure in his grey slacks and executive’s knitwear. Martinelli carried on where he left off in the second half. Roberto Firmino equalised, but the winning penalty came from that left side, and was buried by Saka, who has three goals and four assists now in his past six Premier League games.

It will be hard to avoid seeing a significance in this permanence. For so long Liverpool have been a measuring rod for Arsenal in the Emirates era. Liverpool were the good Arsenal. American-owned, but owned by engaged, sane Americans, Americans with a plan, engaged in actual money-ball stuff rather than hopeful shiny-suited punts.

How does that dynamic look now? As Granit Xhaka spent the last few minutes basically applauding non-stop, hands above his head like a man at a Kiss concert, as Arsenal ended the game playing something close to Wenger-ball, all slick interchanges and smart movement, as the prospect of a 14-point lead over Liverpool in October loomed, it was hard not to feel the sense of something shifting.