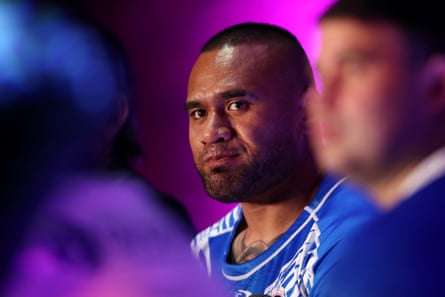 Images of Tagaloa, the giant Samoan creation God show him balancing on two islands and beaming with a smile. The islands were stepping stones for his Polynesian people that have always been on the move.

He would be proud of this Samoan rugby league team who are looking to make history and write the final chapter of the Pacific Revolution by becoming the first Pacific nation to make a Rugby League World Cup final.

Based in Doncaster, Toa Samoa have been channelling Tagaloa’s sense of fun and keeping things loose, having been adopted by the local community.

Immersed in a cultural bubble away from contract negotiations and negative media, they have solidified their brotherhood over kebabs, cultural dance, singing and attending a league two football match.

Eight of the Toa Samoa players still have magic dust from playing in the recent NRL grand final, and this is a group at the peak of their powers.

Doncaster Rugby League chief executive, Carl Hall, has been in awe of the team and is confident of their chances: “We could be hosting the winners, it’s an unbelievable team they’re putting together.”

Central to head coach Matt Parish’s coaching team has been Manly legend Geoff Toovey as assistant coach/court-jester – a wildcat addition to help keep Toa Samoa grounded and focused but always laughing, and culturally blending a team of stars into a star team.

Each Samoan player has been standing on Tagaloa’s two islands – many withdrawing from selection for either the Kangaroos or the Kiwis in favour of representing their family heritage and ancestral homeland.

As the players each took their decisions, the media took aim with a binary ‘us or them’ mentality, labelling them ‘mercenaries’ and ignoring the dual-identity reality for Pasifika players who can love their adopted land as much as their island of heritage.

Roosters dynamo Joseph Suaalii’s decision to play for Samoa energised the community. The prospect of making his father proud and more deeply connect with his culture was overwhelming.

Suaalii’s decision was triggered by family consensus and a childhood memory of his father driving from Sydney to Melbourne to watch Samoa play rugby union.

Samoa’s disastrous performance in the 2017 World Cup, including a loss to Tonga, a draw with Scotland and a 46-0 thrashing by the Kangaroos, was blamed on indiscipline, weight gain and a ‘holiday mentality’.

It was supposed to be Samoa’s graduation party, their coronation as the fourth world power in rugby league, but they were derailed and it triggered deep soul-searching.

Into the vacuum stepped Mate Ma’a Tonga, who came agonisingly close to beating England in the semi-final, bludgeoning their way to a place at rugby league’s head table and breaking a 40-year ‘big three’ stranglehold.

A mouth-watering clash with Samoa awaits – Sipi Tau vs Siva Tau – an ancient Polynesian feud playing out in the home of rugby league.

They looked imperious when crushing France in the warm-up match but must overcome the PNG Kumuls, always a live underdog.

Sadly, after making the semi-finals in the last three World Cups, the Fijians seem to be underdone, thrashed 50-0 by England in a warm-up. They have also been insulted by RFL CEO Ralph Rimmer. But, with high quality NRL players such as Viliame Kikau, Maika Sivo and Api Koroisau, they are an outside chance of an upset if the hastily assembled Kangaroos have an off day.

Rugby league’s Pacific Revolution began brewing on the fields of South Auckland in the 1970s, when Samoan and Tongan migrants who were imported to do tough menial labour began to thrive in Auckland’s Fox Memorial Cup.

The offspring of that generation began the move to Australia for league’s economic mobility opportunities, and are now thriving – 45-50% of the NRL and State of Origin squads are from Maori/Pasifika background.

The crucible for the Pacific Revolution is now western Sydney, a contact-sport powerhouse led by Penrith and Parramatta, two clubs which provide culturally competent support structures in a high-performance environment.

Penrith’s representative teams at all levels contain significant Samoan representation and this group has underpinned the current Penrith dynasty of excellence and prospered in the club’s high-performance environment and culture.

If Toa Samoa finally live up to their potential, it will be realising the dream of those that came before them. Their rise has come through the actions of a series of brave pioneers – in this case Penrith’s Brian To’o and Parramatta’s Junior Paulo, both first-choice selections for the Kangaroos.

These, and other big moments in Samoa’s journey, have delivered incremental growth in belief, from Olsen Filipaina crossing the Tasman in 1980 to Nigel Vagana declaring for Samoa over New Zealand in 2007, to Paulo, Suaalii, To’o and Stephen Crichton choosing Samoa over the Kangaroos.

Samoan-Australian Frank Puletua has witnessed the rise of Toa Samoa as both a player and the NRL’s senior Pasifika administrator.

He calls this point in time “a beautiful, serendipitous moment looking at the path we had to take to get to this point”.

He cannot forget being thrashed 66-10 by the Australians in the 2000 World Cup: “We had low resources and five NRL guys, the rest were amateurs from New Zealand and Samoa. I remember the NRL guys using our own money to help the others, which brought us closer together.”

Puletua feels the opening match against England at St James’ Park in Newcastle is the most important in Samoan history. To win would make a major statement of arrival.

With both Australia and New Zealand on the other side of the draw, Puletua exclaims, “now is Samoa’s time”. Or, he adds with a smile, “we’ll get them next time”.

In a nod to the game’s historical diversity, the Rugby League World Cup ball has been officially named the “Sully”, in honour of legendary winger Clive Sullivan, a trailblazer as the first black player to captain Great Britain in rugby league and more broadly in any sport.

He would have recognised these current Samoans as fellow trailblazers, opening up pathways for others to follow, lifting the credibility, depth and growth of the international game. And, most importantly, doing it with a smile.