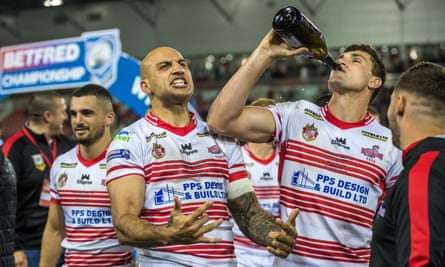 The hooter sounds and Blake Ferguson sinks to his knees and in that moment everything seems to dissolve a little. The exhausted Leigh Centurions players collapse into each other’s arms; fans cling to each other in the stands; the shy and retiring Leigh owner, Derek Beaumont, reluctantly steps on to the pitch, looking genuinely dismayed that the television cameras seem to be homing in on his leopard-print shirt and extravagant dance moves.

Still, everyone can be excused a little exuberance. For once more Leigh are back in Super League.

Yes, it was the Million Pound Game on Sunday evening, even if we are technically not supposed to call it that any more. The climax of the Championship season remains one of the truly absorbing spectacles in rugby league: an irresistible cocktail of hope and despair, ambition and disaster, a reliable generator of some of the sport’s most memorable moments. For all the talk of a widening gulf, the second tier has arguably never been stronger.

Adrian Lam’s dominant Leigh, which won 26 out of 27 games, are proof of that. Their beaten opponents, Batley Bulldogs, were outclassed but remain a club heading in the right direction: well-run and improving, and able to take 1,000 fans on a Sunday night in the midst of a public transport nightmare. On a sporting level at least, something here is clearly working.

IMG are only tangentially interested in the sporting side of things. As they unveiled their new blueprint for the sport last week, their vice-president, Matt Dwyer, largely said as much, making a distinction between “the game” and “the product”. The game, he explained, was fine. Great. No notes. It was the product – the marketing, the packaging, the commercial side, the spectator experience – that needed work. The problem, as ever, is that you cannot touch one part of the game without materially affecting the other.

There is lots in the IMG plan that is well-meaning and eminently sensible. The abolition of loop fixtures – and a move towards fewer fixtures in general – makes perfect sense, although slightly at odds with the rumoured introduction of two-legged Challenge Cup ties. Centralised ticketing and marketing operations are an easy win. “A new brand strategy” is just some words on a piece of paper but, if it does manage finally to produce the James Roby Netflix documentary the world deserves, then frankly we can all get behind that.

But the contentious parts of the IMG vision are scrapping promotion and relegation in favour of what is described as a “grading system”. The algorithm determining who gets the coveted ‘A’ grade and who ends up being forced into feeder club status will probably be driven by a mixture of historical performance, attendance, facilities and ability to attract investment. But nobody knows for sure and partly this is because the consultation is still going on. It is also because the more you show, the more you have to explain.

If you zoom out a little here, the wider subtext is unmistakable. What is IMG saying here? Gosh, you look terrible. Thank God we came along. Really, this is an intervention that could scarcely have been better designed to pick at the sport’s underlying insecurities, a sport still badly burned by the Toronto experiment and yet unshakably obsessed with the one trick, the one new market, the miracle strategy that will transform its fortunes for ever. Already, many of the top clubs have given the proposals a warm welcome, comfortably drowning out the few isolated outbreaks of dissent from lower down the pyramid.

Advocates of abolishing promotion and relegation point out the team promoted from the Championship has been relegated for the past four seasons. Which suggests the sport needs to try harder to bridge the gap, not pull up the ladder and turn the lower leagues into a sort of floating ghost ship. To use the poverty of the game’s lower-reach sides as an excuse for punishing them even further seems curiously reminiscent of the government’s attitude to the poor: have you tried, you know, not being poor?

The real subtext here is the market: about investment and how to find it, about broadcasters and how to attract them. But none of IMG’s proposals really address the deeper fundamentals: a wider lack of investment in our towns by successive governments, a hostile economic landscape, a narrow demographic profile that will take generations to shift. This is not Formula One or UFC or darts, a travelling circus to be dressed up and taken on tour. For most of the people who like it, the intrinsic appeal of rugby league lies precisely in the fact it is not like other sports: that its stars are approachable and humble, that its clubs are embedded in their communities.

Any such argument risks being labelled as unambitious, a vote for the status quo, an argument for the sport to stay small. On the contrary it is IMG’s proposals that betray a lack of ambition: an admission that rugby league’s biggest clubs are simply too fragile and insecure to be left to the winds of sporting chance. That the elite can be this big and no bigger, that it needs to be ringfenced and nurtured.

Perhaps in the long run, throwing itself on the mercy of market forces will set rugby league free. Right now, it feels a lot like shaking the hand that is trying to strangle you.