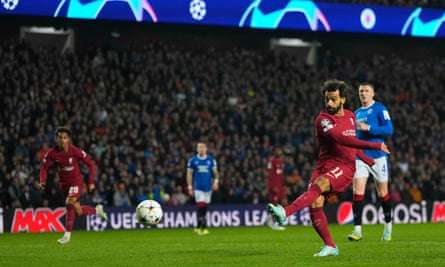 Jürgen Klopp had never experienced Ibrox before but thought it best, having watched enough Old Firm games down the years, to remind his players that Rangers would be a different proposition with a ferocious support at their backs to the team that walked meekly to defeat at Anfield. And so it proved, at least for 45 minutes, until a reminder of the brilliance of Mohamed Salah and Roberto Firmino ensured the only sound heard from those home fans left inside the stadium at the final whistle were boos.

The pair led a rout that was condensed into 32 second‑half minutes – the time it took from Firmino sweeping Liverpool ahead to the moment VAR awarded their seventh goal to Harvey Elliott. In between there was the quickest hat-trick in Champions League history from Salah – timed at six minutes and 12 seconds – as Liverpool condemned Rangers to the heaviest home defeat in their proud history. So much for Ibrox intimidation. Even the pathetic attempts by a small number of enraged Rangers supporters to charge at Liverpool’s fans after the game were laughed at by the away section.

Liverpool had impressed when overcoming Giovanni van Bronckhorst’s team at Anfield last week, only for defeat to follow five days later at Arsenal when the inconsistencies that have plagued their season were laid bare again. Klopp will be desperately hoping the pattern is not repeated when Manchester City visit on Sunday.

Confidence has been one of several issues for his team. If it is not improved by inflicting a record defeat on Rangers, by the sight of Firmino back-heeling an assist to Darwin Núñez or Salah scoring freely from open play once more, even the Liverpool manager may be out of answers on that score.

The first half at Ibrox will have concerned Klopp as much as the second delighted him. There was change in defence with Joe Gomez and Ibrahima Konaté replacing the injured Trent Alexander-Arnold and Joël Matip but also familiar problems. Liverpool conceded first for the eighth time this season and early yet again when Rangers’ bolder and more aggressive start was rewarded with their first goal of the Champions League campaign.

A pristine finish from Scott Arfield was the culmination of several errors from Klopp’s perspective, with Fábio Carvalho dispossessed by James Tavernier before Konaté was sucked out of position and left a chasm in the centre of the visitors’ rearguard.

Rattled, Gomez then almost gifted Rangers a second when playing a back-pass blind to Antonio Colak who was unable to capitalise.

Firmino’s simple equaliser soothed Liverpool’s anxiety but it was not until the second half that they found the creativity, energy and cutting edge to humiliate an unravelling Rangers. There were mitigating circumstances for the Liverpool attack taking time to gel. In shape and personnel, the frontline was unrecognisable from the one that has made Liverpool such a feared and successful force in Europe.

It was no coincidence that Firmino, the only member of their revered front three in the starting lineup, should be the one to turn the tie Liverpool’s way. Or that the other, Salah, should run riot following his 68th minute introduction.

Firmino added a clinical second from Gomez’s penetrating run and cross before capping his night’s work with an exquisite assist for Núñez’s goal. The Uruguay international was indebted to the Brazilian’s ingenuity and generosity, given the opportunity that existed for a hat-trick. As always with Firmino, the greater good of the team shaped his actions.

The Liverpool manager persisted with his new 4-2-3-1 approach but was forced to improvise when Diogo Jota was deemed unfit to play 90 minutes by the club’s medical staff before kick-off. With Luis Díaz sidelined by a knee injury until after the World Cup, and Salah rested ahead of City, Carvalho was drafted in for his first taste of Champions League football on the left while fellow Fulham academy graduate Elliott started on the right.

The inclination of both to drift inside made for a congested Liverpool attack that lacked width in the first half. But they prospered after the interval, operating with a speed and vision that Rangers simply could not withstand. It was the old hands, however, Firmino and Salah, who got Liverpool flying again.